World Cup 2022: what the dream of football success means to migrants 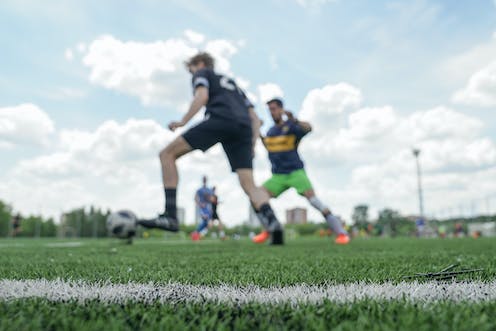 The FIFA World Cup in Qatar has already been hit by controversy around human rights and the treatment of migrant workers in the host country. As fans around the world board planes to go to the tournament (and then return home), it’s worth paying attention to how football and migration are intertwined.

Football is a global game, and migration is very much part of it. According to a recent report from the International Centre for Sports Studies in Switzerland, nearly a quarter of professional footballers (around 14,000) are expatriates, moving thousands of miles from home to play for a team in a different country.

This World Cup is taking place against a backdrop of heightened tensions over immigration to Europe. Migration on boats from the Middle East and North Africa region has been a high profile part of this. More than 800,000 people have reached the Italian coasts on small boats since 2014. The extremely dangerous journey is a desperate attempt to reach Europe in the hope of achieving safety and a better life. And many making the trip think that the better life they seek can be achieved through football.

I have been researching the meaning of football in the lives of boat migrants, no in Sicily. Through months of field observation and interviews with 29 refugees between the ages of 18 and 30, I’ve learned that success as a footballer is what I’ve termed a “possible dream”. It is an unlikely goal, but it can give people purpose and something to hope for, even as they navigate difficult situations. As one participant told me:

We come here in the same way but we all have different problems. Those who still have family in Africa like me, take care of them. You can play football but you have to have a job. You can look for your opportunity in football, of course, but you need a job.

Players are full of hope

For some migrants in Sicily, constantly marginalised by state immigration policies, the football pitch is a place where they can set aside some of their anxieties about their precarious immigration situation. In the small town of Aidone, a local organisation brings together refugees and Sicilian players, turning them into superstars in the eyes of the children who watch the team every weekend. You can also see people playing matches and training in one of the central parks of the Sicilian capital Palermo, hoping to be scouted.

Many of the people I spoke to idolise footballers who “made it” in football and then gave something back to their communities or home countries. Young male migrant footballers idolise players like Sadio Mané or Manchester United’s Marcus Rashford, who have combined sporting success with impact on their community.

Mané, born in Senegal and now playing in Bayern Munich, recently won FIFA’s first ever Socrates Award in recognition of his charity work. He has built a hospital and secondary school in Senegal.

One of my research participants now has a professional footballing career. He recently went back to his country for the first time since undertaking the boat journey many years ago. He took a picture with his mum, both wearing the shirt of his team. In this way, his imagined (and achieved) future collided with his past:

When I was nothing, I was with them (my family and friends). So right now I am still with them. My mother always used to tell me to never forget who I am and never forget where you are from and who you are with.

While some stories of success exist, for most migrant football hopefuls the reality is much harsher. The crossing takes a lot of time, and poses extreme dangers. According to the International Agency of Migration, only 58% of crossings along the central Mediterranean route have been successful over the last year.

Bureaucratic barriers to participation in football may exist upon arrival. In Italy, for example, the process of obtaining membership to the Italian league and being able to take part in official matches can take a long time – sometimes years. This echoes the difficulties that people seeking asylum face in finding regular and legal employment in other sectors.

Read more:
The precarious fate of African footballers in Europe after their game ends

Migration in many forms (permanent or temporary) is a factor in football’s popularity. For the people I’ve spoken to in my research, it carries an even deeper meaning. It is likely that the new right-wing Italian government will toughen immigration policies and barriers for migrants. With only a tiny portion of aspiring footballers actually “making it” and achieving sustainable livelihoods, their stories of success can offer a false promise.

When I watch the World Cup, I’ll be thinking not only of the professional players who have left their homes behind, but of my research participants in Sicily. Caught in a migration limbo, many of them hope to see themselves on the field one day. I’ll be hoping that football, beloved by so many, can include and protect those who are willing to risk everything to pursue their dreams on and off the pitch.

Aspects of my research will shortly feature in the exhibition Jumpers for Goalposts. An exploration of football related research at Loughborough University that will run throughout the World Cup in the Fine Art gallery. 21st November – 16th December.