With Trump’s role on Jan. 6 becoming clearer, and potentially criminal, GOP voters are starting to look at different options 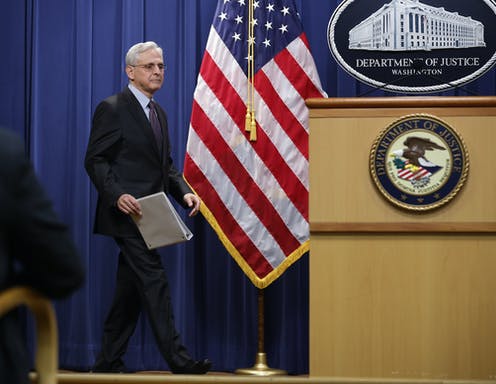 As the Jan. 6 committee reconvened for another round of hearings, the question remains: Will the Justice Department indict former President Donald Trump for his role in the assault on the U.S. Capitol?

In public testimony, the evidence is mounting against Trump.

While Attorney General Merrick Garland has previously said he remains committed to holding all Jan. 6 perpetrators, at any level, legally accountable, it is also true that no former U.S. president has ever been criminally charged.

The Department of Justice rarely goes after politicians and, instead, according to former Attorney General Bill Barr, sticks to “meat and potatoes” crimes.

These include witness tampering, perjury and obstruction of justice.

Yet in the light of bombshell testimony on June 28, 2022, from former White House aide Cassidy Hutchinson, pressure on Garland to do something about Trump’s direct involvement in the failed attempt to overturn the 2020 election is mounting from House Democrats.

As scholars of liberal democracy, elections and how the rule of law enables state development, we can’t help but notice that the former president may be joining the ranks of erstwhile leaders from other countries who were once thought to be untouchable but who ultimately faced justice.

As revealed in the committee’s public proceedings, Trump could face new legal liabilities, and mounting concerns among major GOP figures about his potential crimes are beginning to hurt his political future.

There is now far more evidence than what was presented during Trump’s second impeachment trial of potential crimes during the waning days of his tenure.

The evidence not only points to Trump’s failure to perform his constitutional duties on Jan. 6, 2021, but also includes some potential meat-and-potatoes offenses like intimidation of government officials with the threat of force and obstruction of Congress.

According to Hutchinson, Trump knew that his supporters were armed on Jan. 6 as he engaged in fiery speech that incited the MAGA crowd to march to the Capitol.

There is also new evidence about potential crimes committed after Trump left office, including witness tampering, obstruction of justice and other offenses often alleged against organized crime groups.

And if that’s not enough, Vice Chair Liz Cheney ended the day’s televised Jan. 6 committee hearings on July 12 with yet another cliffhanger: Trump tried to contact unnamed committee witness.

Cheney said the committee referred the incident to the Department of Justice.

For one, different rules for evidence apply, and witnesses such as Hutchinson would be subject to cross-examination.

Her testimony regarding the actions of former White House counsel Pat Cipollone requires confirmation from their source, whom the committee finally heard from behind closed doors on July 8, 2022.

There are emerging signs that the hearings are damaging Trump’s political future, making him a less attractive GOP presidential nominee for 2024.

This is especially in light of the ascendance of Florida Gov. Ron DeSantis, whose star is rising as Trump’s falls.

Several polls show that DeSantis is a credible substitute for Trump among his supporters.

Consider the Granite State Poll, run by the University of New Hampshire.

Meanwhile, a national poll conducted by Morning Consult/Politico between June 24 and June 26 shows that DeSantis has increased his support among Republicans by 38%.

According to major Republican donor Dan Eberhart, “Trump is facing an important onslaught of negative facts with these hearings and there is no real defense … and there aren’t facts to put in front of the public to make any of this sound less bad.”

And according to GOP fundraiser Eric Levine, “Donors are very concerned that Trump is the one Republican who can lose in 2024.”

The latest disclosures about Trump’s potential criminality also mean that congressional Republicans and state officials may want to distance themselves from him, especially if they fear getting entangled in investigations.

Cheney’s spirited speech on June 29 at the Reagan Library railing against Trump and his threat to the Republican Party received a standing ovation and offers a telling example of where the GOP’s elite are potentially headed.

As with all things Trump and his seeming political, if not criminal, invincibility, the potential softening of support is tempered by several factors.

He survived two impeachments. Though the findings did not rise to the level of criminality, the Mueller report found extensive coordination between his 2016 campaign and Russia.

Ongoing criminal investigations and prosecutions into his businesses in New York, as well as attempts to corrupt Georgia’s presidential elections, have thus far failed to produce criminal indictments.

Even if GOP voters flirt with DeSantis, Trump has seemingly unshakable support from a portion of the GOP base, who may matter electorally in key battleground states such as Michigan and Pennsylvania, even if their numbers have shrunk nationally.

These Republicans may simply not care about holding Trump accountable, no matter what additional evidence comes out of the Jan. 6 hearings.

Polarization and political tribalism are still sky-high in the U.S., including in Congress. And most Americans of all political stripes still report that they care more about inflation and the economy than Trump’s erratic behavior, potential criminal activity or even the health of democracy.

Going after former presidents in the rest of the world is dicey and sometimes backfires, even when they’ve been accused of serious wrongdoing.

Prosecuting current or past top officials accused of illegal conduct seems like an obvious decision for a democracy – everyone should be held accountable and subject to the rule of law.

But even if they brazenly commit crimes, presidents and prime ministers aren’t just anyone.

They are chosen by a nation’s citizens or their parties to lead. They are often popular, sometimes revered.

Based on our research, legal proceedings against them are inevitably perceived by their political supporters and even most citizens as solely political and become divisive.

For this reason alone, it is not clear that Garland will be prosecuting Trump any time soon, even as meat-and-potatoes criminal activity reveals itself.

Regardless of what Garland decides, Americans have been offered compelling testimony on Trump’s effort to stay in office after he lost the 2020 election.

Whether that informs their future choices at the ballot box remains to be seen.