Will closing the ‘boyfriend loophole’ in gun legislation save lives? Here’s what the research says 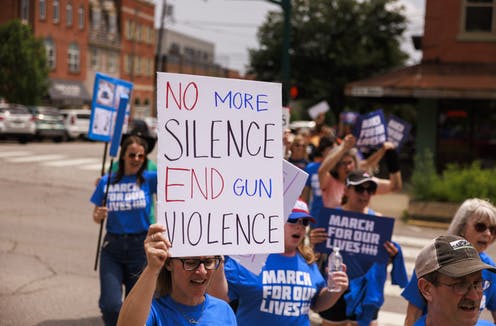 The U.S. Congress has passed a bipartisan gun safety bill, representing the first federal gun safety legislation to be passed in a generation.

The legislation, which will now be signed into law by President Joe Biden, is limited in scope. But among its provisions is the closing of the so-called “boyfriend loophole” which allows some people with a record of domestic violence to still buy firearms.

April Zeoli, at Michigan State University, researches the link between intimate partner violence, homicide and gun laws. She explains what the change means – and why it would save lives.

What is the boyfriend loophole?

Under current federal legislation, intimate partner relationships are defined only as those in which two people are or were married, live or lived together as a couple, or have a child together. People who were in a dating relationship are largely excluded from this definition.

As a result, dating partners are exempt from federal laws that prohibit those convicted of domestic violence misdemeanor crimes, or those who are under domestic violence restraining orders, from buying or possessing a firearm. This is what is referred to as the “boyfriend loophole”.

To put it another way, if you have two domestic abusers who have both committed the same severe physical violence against their partners, but one of them is married to their intimate partner while the other isn’t, then only the domestic abuser who is married could be prohibited from having a gun.

What does the data tell us about domestic violence and guns?

Research suggests that when a violent male partner has access to a gun, the risk of murder to the female partner increases by fivefold. We also know that guns are used to coerce, intimidate, and threaten intimate partners, and that gun-involved intimate partner violence can result in more symptoms of post-traumatic stress disorder than intimate partner violence that doesn’t involve guns. With a nationally representative survey suggesting that 3.4% of victims of domestic violence have experienced non-fatal gun use by their abusers – combined with the high numbers of intimate partner murders committed with guns – this constitutes a large public health threat.

Why are people talking about the ‘boyfriend loophole’ now?

This time, Congress has actually passed new gun safety legislation that will close, or at least narrow the loophole. The wording of the proposed legislation extends the ban to those who “have or have had a continuing relationship of a romantic or intimate nature.”

There are a few issues to note here. First, the motivation to pass new gun safety legislation came from recent mass shooting events and the hope of preventing future mass shootings. We know that many mass shootings often involve killing intimate partners or family members, and that some of the shooters have criminal histories involving domestic violence before they commit the mass shootings.

But mass shootings make up only a small percentage of shootings in the United States. Intimate partner homicide is a more frequent occurrence.

My research shows that when states extend firearm restrictions placed on individuals under domestic violence restraining orders to cover dating partners, there is an associated reduction in intimate partner homicide.

However, the legislation which has made its way through Congress does not do this exactly. The law would only close the loophole for those convicted of domestic violence misdemeanor crimes. It does not cover restraining order laws.

What is the current situation at the state level?

This has created a situation in which safety from gun violence by a violent dating partner depends on the state in which you live. Federal legislation would help to create a more consistent picture across the country when it comes to dating partners who commit violence.

What effect will closing the ‘boyfriend loophole’ have at a national level?

My research suggests that the federal firearm restriction for individuals convicted of domestic violence misdemeanor crimes is associated with reductions in intimate partner homicide committed with firearms.

As such, one could hypothesize that restricting access to guns for a greater number of dangerous intimate partners would further reduce firearm homicides within violent relationships. By the same thinking, closing the boyfriend loophole when it comes to banning gun possession for individuals under domestic violence restraining orders would also probably save lives.

April M. Zeoli receives funding to support her research from the National Collaborative for Gun Violence Research, the Joyce Foundation, the Centers for Disease Control and Prevention, and the National Institutes of Health. She is affiliated with the Consortium for Risk-Based Firearm Policy.