Why the Lady of Heaven film is dividing Muslim opinion 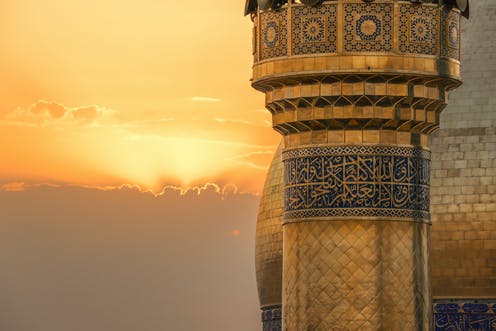 Following picketing by Muslim groups, leading UK cinema chain Cineworld cancelled all screenings of blockbuster film, The Lady of Heaven. Produced in Britain, this historical epic tells the story of Fatima, the daughter of the Prophet Muhammed.

Protesters have labelled the film “blasphemous” and “sectarian filth”. Governments in Egypt, Pakistan, Iran, Iraq, and Morocco have all denounced it. The Muslim Council of Britain has condemned it as “divisive”, and more than 130,000 people have signed a petition calling for it to be banned.

For some, this is “Islam’s ‘Life of Brian’ moment”, in reference to the Christian protests against the 1979 Monty Python parody film about the life of Jesus. But The Lady of Heaven is not a parody of Islam. It does not intend to discredit or mock the Islamic faith. Written by a Shi’a Islamic scholar, Yasser al-Habib, it purports, in fact, to tell the “untold story” of one of Islam’s most venerated figures, using a contemporary storyline involving Islamic State (IS) as an introductory device.

Scholarship shows, however, that the narrative the film hinges on represents a very specific interpretation of Islamic history. This not only places it outside the majority (Sunni) consensus, but is also an interpretation many Shi'a Muslims would find extreme.

Although Islam comprises many different denominations, tensions between its two largest sects, Sunnism and Shi'ism, have flared throughout history. To understand why this film has been labelled as “sectarian”, it is important to understand the divergences between mainstream Sunni and Shi’a theology.

The initial split between Sunnis and Shi'as occurred as a result of a succession dispute following the death of the Prophet Muhammed in 632AD. Sunni Muslims (the majority) believe that Muhammed’s companion, Abu Bakr, was elected as caliph. The minority Shi’a Muslims believe that the Prophet directly appointed his cousin and son-in-law, Ali, husband to his daughter, Fatima. It was this dispute that eventually led to the crystallisation of two distinct Islamic sects.

Fatima is thus a central figure in Shi’a Islamic thought. She had a direct bloodline to the Prophet. And she was the mother of Hussain, whose death at the Battle of Karbala in 680AD is considered one of the formative moments of Shi’a Islamic belief and practice.

Fatima herself is said to have died not long after the Prophet. The manner of her death is a further contentious issue between Sunnis and Shi'as.

Some Shi’a scholars believe that two of the Prophet’s companions, Abu Bakr and Umar, injured Fatima behind a door while forcing entry to Ali’s house. They believe this caused her injuries, eventually leading to her death. Many Sunnis, conversely, find this suggestion that two of their most venerated figures contributed to the death of the Prophet’s daughter deeply offensive.

Some critics of the film have suggested that an opening scene of The Lady of Heaven contains a veiled reference to this interpretation of Fatima’s demise. In the scene, Islamic State fighters force entry into a young Iraqi Shi’a boy’s house. They push the boy’s mother (who is also called Fatima) behind the door and eventually execute her.

The film’s website describes Fatima as “the first victim of terrorism”. Contemporary portrayals of Fatima and other early Islamic figures as revolutionary fighters tap into what my research shows is a very specific narrative about the arc of Islamic history.

Fatima has long been revered as “an exemplar of chastity and religiosity”. However, as Ruth Roded wrote in her 1994 book, Women in Islamic Biographical Collections, until recently, she was considered a “marginal and even passive” figure in the events of early Islam.

It wasn’t until the 1950s, with Shi’a thinkers including Mohammed Bakr al-Sadr (the founder of the Islamic Da’wa Party in Iraq) and former Iranian supreme leader, Ayatollah Khomeini, that Fatima’s role was revised. She was transformed, as Iranian studies specialist Rachel Kantz Feder has put it, “from a weak victim to a courageous revolutionary heroine”.

This shift was part of a reimagining of Shi’a history, from quietist dissidence to emancipatory struggle, that took place throughout the 20th century. In his 2011 book, Shi'ism: A Religion of Protest, Iranian-American scholar Hamid Dabashi argues that this shift helped inspire the Shi'a Islamic revolution in Iran.

The Lady of Heaven extends this revolutionary narrative, drawing explicit parallels between some of the Prophet’s companions (most notably Abu Bakr, Umar and Uthman) and IS in modern-day Iraq. Malik Shlibak, one of the film’s producers, recently commented on BBC Newsnight that “they [Abu Bakr and Umar] were barbaric, ISIS-like figures”.

This is an extreme and marginal viewpoint, even within Shi’ism. Ayatollah Sistani, Shi'a Islam’s current highest-ranking scholar, issued a fatwa denouncing the cursing of the Prophet’s companions in this manner. The man behind the film, Yasser al-Habib, a Kuwaiti-born, Shi'a cleric exiled in the UK, has long been a divisive figure among both Sunni and Shi'a Muslims. Al-Habib gained notoriety for his view that the Prophet was assassinated by Abu Bakr, Umar, and his third wife Aisha, all of whom are venerated in Sunni Islam.

Some commentators have raised concerns that the film could exacerbate Sunni misconceptions about Shi'a beliefs. In particular, it could intensify the historic trend of labelling Shi'as as “kafr” (unbelievers) in extreme Sunni discourse, a trend which has become increasingly visible in recent years, especially since the rise of IS.

With sectarian tensions flaring in the Middle East, this film is a potential touchpoint in a long history of Sunni/Shi’a animosity.

Enlighted Kingdom, the production company behind The Lady of Heaven, was contacted to comment for this article, but did not respond before it went to press.

Emanuelle Degli Esposti has received funding from the British Academy, the Leverhulme Foundation, the British Institute for the Study of Iraq, the Council of British Research in the Levant, and SOAS, University of London.