Why do animals have tails? 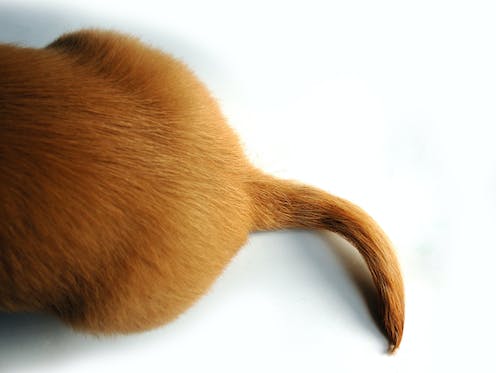 Scientists have found fossils of animals with tails dating back hundreds of millions of years. Back then, early fish used their fanlike tails as fins to swim through oceans and escape predators.

As these fish evolved into creatures that lived on the land, their tails started to change too.

Whether they belong to reptiles, insects, birds or mammals, tails serve a wide variety of purposes. Modern animals use their tails for everything from balance to communication and finding mates.

A balance and movement assist

Scientists believe that dinosaurs, including the Tyrannosaurus rex, swung their tails side to side to balance their heavy heads and bodies while walking on two legs. This movement allowed them to run fast enough to catch their prey.

Similarly, present-day kangaroos use their tail for balance when they leap across the open land. But they don’t just use it as a counterbalance for their weight – the kangaroo’s tail also functions as a powerful third leg that can help propel them through the air.

Cats and other animals that climb often have bushy or long tails that help them balance, kind of like a tightrope walker holding a long pole.

Monkeys use their long tail for balance while swinging through forest tree branches. Many have prehensile, or grasping, tails that act like hands and allow them to hold onto tree limbs.

These tails are so strong that they can even hold the animal up while it eats fruit and leaves.

Other animals’ tails evolved into weapons. For instance, stingrays have a trademark stinger tail they can use as a defense when a predator attacks them.

Venomous rattlesnakes have buttons of dried skin on their tail that make a racket when they shake it. This warns any animals that might threaten the rattlesnake that it’s getting ready to strike.

Many insects also have tails, but they evolved separately from other animals with backbones, like fish and mammals. Most tailed insects use their tails to lay eggs or to sting and paralyze hosts or prey. In some animals, like wasps, their tails can do both, as certain parasitic wasps will lay their eggs inside a host.

Grazing animals, like North American bison and the wildebeest and giraffe in Africa, have tails with bunches of long hairs that can be waived as a whisk to swat off mosquitoes and other insects that may be bothering them. Domestic cows and horses also have that kind of tail.

Birds use their feathered tails both to balance while sitting on a tree limb and to steer and reduce drag while flying. Some birds also use their tail as a mating display.

Animals that live and hunt in groups or packs, like wolves, use a variety of tail positions to indicate their rank.

Dogs, who descended from wolves, also use their tails for communication. You’ve probably seen dogs wag their tails when they’re excited.

Why you don’t have one

Even though humans don’t have a long grasping tail like monkeys do, or a vibrant feather tail like peacocks have, our ancestors did have tails.

Scientists believe those tails vanished from our human ancestors around 20 million years ago. Once they started walking upright, they no longer needed tails to help with balance anymore.

Michael A. Little does not work for, consult, own shares in or receive funding from any company or organization that would benefit from this article, and has disclosed no relevant affiliations beyond their academic appointment.