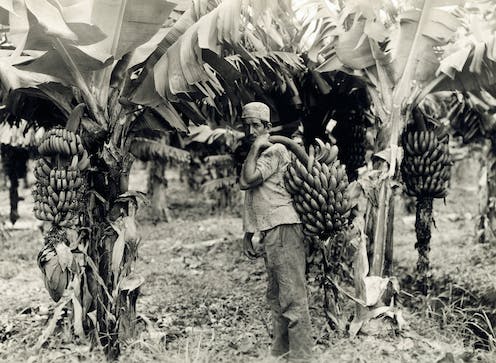 When someone mentions a “banana republic,” they’re referring to a small, poor, politically unstable country that is weak because of an excessive reliance on one crop and foreign funding.

The term originated as a way to describe the experiences of many countries in Central America, whose economies and politics were dominated by U.S.-based banana exporters at the turn of the 20th century.

After the FBI’s August 2022 search of the residence of former President Donald Trump, some Republicans compared the U.S. to a banana republic. And in the wake of the Jan. 6, 2021, attack on the U.S. Capitol, a surge of tweets did the same.

Political instability within the U.S. has little to do with fruit. So why is the term being used?

In the 1880s, the Boston Fruit Company, which later became the United Fruit Company and then Chiquita, began importing bananas from Jamaica and launched a successful campaign to popularize them in the U.S.

As demand for bananas grew, large companies made deals with governments across Central America to fund infrastructure projects in exchange for land and policies that would allow them to expand production.

The growers often depended on authoritarian rule to protect land concessions and quell labor unrest that might shrink their profits. Sometimes, they would actively subvert democracy to reassert their influence. The Cuyamel Fruit Company, for example, supported a coup in Honduras in 1911 that replaced its president with someone more aligned with U.S. interests.

Another well-known example is the 1954 CIA-orchestrated plot on behalf of the United Fruit Company against Guatemalan President Jacobo Árbenz. That coup ended the first real period of democracy that Guatemala had known.

Responding to the events that unfolded leading up to and during the Jan. 6 attack on the Capitol, current and former government officals commented that they resembled the instability of banana republics that were known for ignoring election results and overturning those results with coups – that’s exactly what happened in Costa Rica in 1917.

When American politicians and political commentators use the term, they’re often trying to conjure up images of corruption, repression and failures to stop executive overreach. They’re equating government officials with the tinpot dictators supported by foreign interests who acted with impunity to govern by force and persecute their opponents.

A number of Republican politicians invoked the term in response to the FBI’s raid of Trump’s Mar-a-Lago residence.

But the comparison isn’t apt. It’s true that outgoing leaders are more likely to be investigated and punished by their political opponents in countries with strong executives and weak judiciaries.

However, holding elected officials accountable for their actions and not allowing anyone to be above the law is actually characteristic of a healthy democracy.

Matthew Wilson does not work for, consult, own shares in or receive funding from any company or organization that would benefit from this article, and has disclosed no relevant affiliations beyond their academic appointment.