Wealth of nations: Why some are rich, others are poor – and what it means for future prosperity 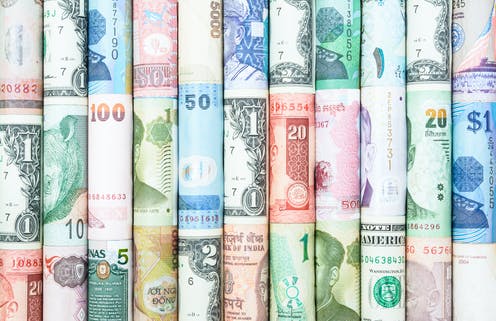 Why are some nations rich and others poor? Can the governments of poor nations do something to ensure that their nations become rich? These sorts of questions have long fascinated public officials and economists, at least since Adam Smith, the prominent Scottish economist whose famous 1776 book was titled “An Inquiry into the Nature and Causes of the Wealth of Nations.”

Economic growth matters to a country because it can raise living standards and provide fiscal stability to its people. But getting the recipe consistently right has eluded both nations and economists for hundreds of years.

As an economist who studies regional, national and international economics, I believe that understanding an economic term called total factor productivity can provide insight into how nations become wealthy.

It is important to understand what helps a country grow its wealth. In 1956, Massachusetts Institute of Technology economist Robert Solow wrote a paper analyzing how labor – otherwise known as workers – and capital – otherwise known as physical items such as tools, machinery and equipment – can be combined to produce goods and services that ultimately determine people’s standard of living. Solow later went on to win a Nobel Prize for his work.

One way to increase a nation’s overall quantity of goods or services is to increase labor, capital or both. But that doesn’t continue growth indefinitely. At some point, adding more labor only means that the goods and services these workers produce is divided between more workers. Hence, the output per worker – which is one way of looking at a nation’s wealth – will tend to go down.

Similarly, adding more capital such as machinery or other equipment endlessly is also unhelpful, because those physical items tend to wear out or depreciate. A company would need frequent financial investment to counteract the negative effect of this wear and tear.

In a later paper in 1957, Solow used U.S. data to show that ingredients in addition to labor and capital were needed to make a nation wealthier.

Solow called this something else “technical change,” and today it is best known as total factor productivity.

Total factor productivity is the portion of goods and services produced that is not explained by the capital and labor used in production. For example, it could be technological advancements that make it easier to produce goods.

It’s best to think of total factor productivity as a recipe that shows how to combine capital and labor to obtain output. Specifically, growing it is akin to creating a cookie recipe to ensure that the largest number of cookies – that also taste great – are produced. Sometimes this recipe gets better over time because, for example, the cookies can bake faster in a new type of oven or workers become more knowledgeable about how to mix ingredients more efficiently.

Will total factor productivity continue to grow in the future?

Solow assumed that TFP would grow exponentially over time, a dynamic explained by the economist Paul Romer, who also won a Nobel Prize for his research in this field.

Romer argued in a prominent 1986 paper that investments in research and development that result in the creation of new knowledge can be a key driver of economic growth.

Despite Romer’s efforts to provide a basis for the assumed exponential growth of TFP, research shows that productivity growth in the world’s advanced economies has been declining since the late 1990s and is now at historically low levels. There are concerns that the COVID-19 crisis may exacerbate this negative trend and further reduce total factor productivity growth.

Recent research shows that if TFP growth falls, then this can negatively affect living standards in the U.S. and in other rich countries.

A very recent paper by the economist Thomas Philippon analyzes a large amount of data for 23 countries over 129 years, finding that TFP does not actually grow exponentially, as Solow and Romer had thought.

Instead, it grows in a linear, and slower, progression. Philippon’s analysis suggests that new ideas and new recipes do add to the existing stock of knowledge, but they don’t have the multiplier effect previous scholars had thought.

Ultimately, this finding means that economic growth used to be quite fast and is now slowing down – but it’s still occurring. The U.S. and other nations can expect to get wealthier over time but just not as quickly as economists once expected.