US abortion restrictions are unlikely to influence international trends, which are largely becoming more liberal 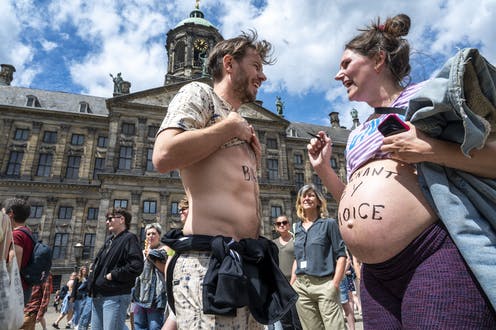 The Supreme Court’s June 24, 2022, ruling that overturned Roe v. Wade is already having profound effects across the United States, from Florida to Wisconsin. And the ruling also bucks a clear worldwide trend. In countries from Iceland to Zambia, abortion restrictions have been lifted over the last two decades, not tightened.

Today, only 24 countries out of 195 prohibit abortion, representing just 5% of women of reproductive age globally. Twice that many countries have made it easier to legally get an abortion in the past 20 years.

The U.S. joined the short list of countries that are increasing abortion restrictions when the Supreme Court overturned the constitutional right to abortion in Dobbs v. Jackson Women’s Health Organization. The ruling did not itself make abortion illegal – it said instead that there is no federal right to get an abortion and that the power to regulate belonged to the states. Many states are now tightening restrictions on abortion.

In the past, some Supreme Court rulings, such as Brown v. Board of Education, which deemed school segregation illegal, have been influential abroad, cited by other courts in their rulings worldwide. Similarly, some women’s rights advocates are concerned that the Dobbs decision could lend legal support to more restrictive abortion policies in other countries.

In fact, the Dobbs decision may serve to further isolate the U.S. and undermine its credibility as a global leader on women’s rights.

Abortion trends in other countries

During the same period, only one wealthy Western country, Poland, increased restrictions on abortion, joining authoritarian regimes like Nicaragua on the short roster of nations with near-complete abortion bans.

In each of these countries, this change came only after years of protests, court fights and people organizing for political change. These activists’ successes depended on building coalitions within their countries – not on U.S. influence.

Updated in 2018, Nepal’s law now permits abortion before 12 weeks of pregnancy, and, in the cases of rape, incest, fetal abnormality or risk to a woman’s life or health, any time before 28 weeks.

In Ireland, activists worked for decades to overcome opposition to abortion from powerful forces within the Catholic Church. Using strategic messaging to destigmatize abortion and draw attention to Ireland’s isolated status among other European countries, activists gradually influenced public opinion.

In 2018, a national referendum decisively repealed the long-standing constitutional abortion ban. The new law permits abortion up until 12 weeks of pregnancy. If there is a risk to the life or health of the pregnant woman, however, abortion is allowed up until when a fetus could survive outside the womb.

Argentina also changed its abortion policies in 2020, repealing a law that allowed abortion only in cases of rape or when there was a serious risk to the health of the pregnant woman.

Now, people can get abortions up until 14 weeks of pregnancy. In this predominantly Catholic country, people’s opposition to the law because of religious reasons has slowed implementation of this change in rural areas. Yet Argentina has also spurred a wave of expanded abortion rights in Latin America – called the “green wave” because of the green scarves worn by abortion activists in the region.

In May 2022, for example, Colombia’s top court upheld the right to get an abortion up until 24 weeks, adopting a standard like that in the Netherlands and Canada.

Some observers speculate that Roe’s reversal could give new energy to anti-abortion factions seeking to turn back the recent gains made through more liberal abortion laws in other countries.

Other countries aren’t likely to follow the US’ lead

But given the extensive coalition building by citizens groups that led to changes in places like Argentina, Nepal and Ireland, rescinding abortion rights will not be easy.

It would be misguided to attribute too much influence to U.S. developments and assume that countries would roll back abortion rights because of the Dobbs decision.

There was a time in the late 20th century when U.S. constitutional opinions were influential globally, but that is no longer the case. One reason is that other countries’ democracies matured and their courts built up their own legal record, giving them less impetus to look to U.S. decisions.

And any vestiges of outsize U.S. influence ended during the Donald Trump presidency, when the U.S. systematically dropped out of international groups such as the United Nations Human Rights Council.

The U.S. has also long stood as an outlier on women’s rights in the international context.

For example, more women die in the U.S. during or shortly after pregnancy than in any other rich country. The U.S. is also one of the few countries that does not have paid family and medical leave.

The overturning of Roe and federally protected abortion rights after nearly 50 years is certainly a cautionary sign for abortion rights supporters worldwide. But given the strength of the global women’s movement and the robust defense of abortion rights in most countries, Dobbs’ relevance may prove isolated to the U.S. It’s not likely a signal that the worldwide trend of expanding abortion rights is reversing.

Martha Davis does not work for, consult, own shares in or receive funding from any company or organization that would benefit from this article, and has disclosed no relevant affiliations beyond their academic appointment.