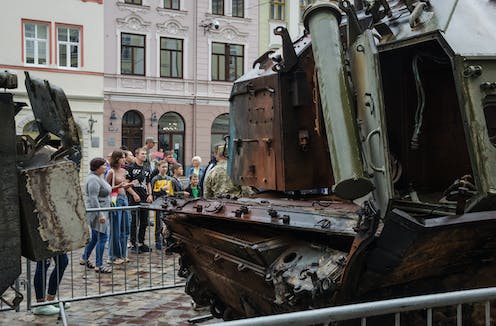 The war being waged by Russia in Ukraine has been described in many ways – an attempt to recreate the USSR, a militant attempt to create a new Eurasia civilization, or a proxy war between Russia and the West. But whatever Russian President Vladimir Putin’s ambitions and aspirations were in the past, they have become ever more blatantly imperial and colonial as the fighting continues.

A colonial war, like Russia’s in Ukraine, is one in which a self-styled superior people believes it has the right, even the duty, to do what it feels is good for its inferiors – which conveniently conforms to its own self-interest.

“Colonial” or “imperial” are not just epithets thrown around casually, as are the now-familiar accusations of fascism and genocide, most recently used against Russia.

As polemical as their usage can be, colonialism and imperialism have explanatory power.

Imperialism was an antiquated system of domination that attempted to include diverse peoples within a single state under the authority of a purportedly superior institution – emperors, nobles or Übermenschen – or in overseas empires under the control of a foreign master who promised to “civilize” – as they put it – the benighted natives.

Think of the British in India – white men lording it over millions of Indians in the name of a higher civilization. Or the Habsburg dynasty ruling peoples from Spain to the Netherlands to Austria and Hungary via strategic marriage and military conquest.

If empires were diverse and inegalitarian, modern nation-states were supposedly intended by their creators to be relatively homogeneous and egalitarian. Nation-makers recognized popular sovereignty rather than dynastic rule. They operated democratically. The right to rule rose up from the people.

Consider the earliest capitalist states of the 17th and 18th centuries – England, the Netherlands and France – that practiced nation-making at home in Europe. By the time of the French Revolution of 1789, their people were dealt with as equal citizens under the law, not as a monarch’s subjects.

But in their colonies – like the Dutch East Indies or French Indochina – the locals were subjects of imperial authorities from afar, bereft of rights and sovereignty.

In the historical stories told by nationalists, nation-states were supposed to be the legitimate successors of empires. Relatively homogeneous culturally, with rulers chosen by the people, they were products of the modern world, while empires were seen as archaic and doomed to collapse.

But it has not quite worked out that way in the past century. And Russia’s war on Ukraine is a reflection of that.

Over the past century, those who believed egalitarian and democratic nation-states would logically and naturally succeed empires have gotten a reeducation in political theory.

Nation-states can be imperialist and seek to envelop other nationalities within their territory or dominate their neighbors militarily or economically. Recep Tayyip Erdoğan’s Turkey treats its tens of millions of Kurds like a colonized people. A nation-state privileging one ethno-religious people, like Israel, subjects millions of Palestinians to inequitable domination.

Large diverse states, like the United States and India, swing between multicultural egalitarianism, recognizing the rights of minorities, and bouts of xenophobic hostility to those differing from the majority, white or Hindu.

Within such states some people are treated more favorably than others. Minorities often experience not only discrimination, but violence. Other large, diverse states, like Putin’s Russia, also vacillate between a multinational nation-state – about 80% are ethnic Russians – and imperial treatment of various subordinate peoples.

The Kremlin elite has promoted a virulent nationalism to rally the population in its war against Ukraine, which represents a turn toward neocolonialism.

Take Putin’s opportunistic and disingenuous use of the language of liberation, of preventing genocide and removal of Nazis as justification for his invasion of Ukraine. He uses that language in the way 19th-century imperialists did when they invaded, dominated and exploited other countries, claiming they were reluctantly undertaking the burden that white men had to bear to defend against barbarians and savages.

Having failed to decapitate the Ukrainian government, the Kremlin retreated to taking territory savagely in the east and south of the country. The mythology of the Russkiy Mir – the supposed unity of the Ukrainian, Belarusian and Russian peoples – has been instrumentally deployed by Russia to justify the brutal attack on the very people who were supposed to be the brothers and sisters of the Russians.

Contrary to Russia’s plans, Kyiv did not surrender. Ukrainians instead flocked to the struggle against alien rule. The result of the invasion has been the strengthened resolve of Ukrainians to resist a new colonialism, which they remember having experienced for hundreds of years under the czars and the Soviets.

As a historian who has studied empires and nations, I believe that once a government like Putin’s has concluded that its existence is threatened by dangerous inferiors, it is motivated to use its greater power and its own righteous sense of historical superiority to bring its enemies under control.

If indirect rule by pliant native rulers or satraps are not sufficient to remove the perceived danger, territorial acquisition is likely to follow. The option left to Moscow as the war grinds into stalemate is direct rule over Ukrainian territory.

Lands under the fragile and contested control of the Russians are already being consolidated into a newly named territory. A governor has been appointed, passports issued; the ruble imposed as the official currency. Russia’s maximal goals appear to be to take possession of the whole crescent in eastern Ukraine, from Kharkiv to Kherson/Nikolaev as well as Crimea, annexed already by Russia in 2014.

As a nation-state engaged in consolidating its identity as democratic and Western, Ukraine faces an implacable foe whose current sense of self is embedded in its imperial past and its distinction from the West.

Torn for 30 years of independence between East and West, thanks to Russia’s aggression Ukraine has decisively chosen the West. The imperialist war has given rise to an effective, if desperate, anti-colonial resistance. Ukrainians are more united than ever before.

For Ukrainians, compromise between independence and sovereignty on one hand and subjugation to imperialism on the other appears impossible. Surrendering land to the aggressor, it is widely believed, will only feed his appetite.

Almost six months into the war, the Russians have their own cruel calculus. Sergei Lavrov, Russia’s foreign minister, has issued a dire warning: The longer the war goes on, the more territory will be seized by Russia and brought into the expanding Russian state. The West’s continued arming of Ukraine, he claims, only prolongs the war.

There is, at the moment, little appetite on either side for a negotiated settlement.

But in this war of attrition, time and the weight of geography and population are on the side of the aggressor. Russia can outlast its opponents and the West. Overshadowing everything is the nuclear threat.

War is a failure of reason, diplomacy and compromise. The negotiations that allowed Ukrainian grain exports to resume demonstrate that some compromise, however fragile, might be reached.

As difficult and unsavory as it is to negotiate with Putin, some end must ultimately be discussed. This is a tragic choice. Yet even empires have their limits, and when faced with determined opposition, they learn the harsh lesson of imperial overreach.

Ronald Suny does not work for, consult, own shares in or receive funding from any company or organization that would benefit from this article, and has disclosed no relevant affiliations beyond their academic appointment.