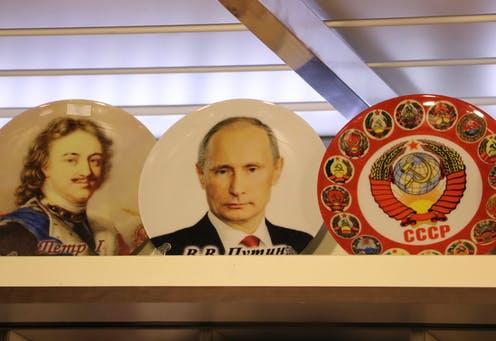 Vladimir Putin’s recent evocation of the military successes of 18th-century tsar Peter the Great against Sweden is just the latest example of his distinctive cherry-picking of imperial predecessors, Soviet rulers and religious icons to justify his invasion of Ukraine. It’s all part of the imperial nostalgia that the Russian president has enthusiastically embraced since the mid-2000s.

In a meeting with young entrepreneurs, engineers and scientists in St Petersburg in early June, Putin recalled Peter the Great waging the Great Northern War for 21 years. “On the face of it, he was at war with Sweden taking something away from it,” he said. “He was not taking away anything – he was returning. Clearly, it fell to our lot to return and reinforce as well.”

This imperial nationalism stems from a nationalist rhetoric that emerged after the breakup of the USSR in 1991, focusing on land losses and lamenting the separation of communities by new political borders. Increasingly, the tsarist past has provided a readily available reference framework to praise absolutist rule and defend aggressive foreign policy.

Peter the Great (1682-1725) transformed the tsardom of Russia into the Russian empire following his 1721 victory against Sweden, founding a modern Eurasian empire. He became “Great” through warmongering – and Putin has clearly embraced this approach as a path to success.

One of Peter’s most notable victories was the 1709 Battle of Poltava on the Vorskla River in Ukraine. The geography is important here: the Great Northern War unfolded not just in the Baltic but also in today’s eastern Ukraine. This war is, therefore, an important event in Ukrainian history as well. While Putin’s recent statement can be read as a direct provocation to the Baltic states, whose lands were gained from Sweden after 1721, it also situated the rise to prominence of the Russian empire on Ukrainian lands.

Peter sought to extend Russia’s borders in the Baltic. While the conflict was partly motivated by the loss of lands to Sweden a century earlier, his empire-building ambitions were paramount. Putin likes to cast himself as a tough leader like Peter – a man of action, who does not shy away from direct conflict.

But there are some key differences between Peter and Putin, and chief among them is that Peter defined himself – and remains defined – as a westernising ruler. The building of St Petersburg (Putin’s hometown) was a despotic exercise that mobilised the bound labour of tens of thousands of serfs, but one of its primary goals was to provide Russia with a window to Europe on the shores of the Baltic. Since June 9, Russian social media have circulated memes about Putin’s closing off this “window on the west” through his degradation of international relations.

Peter the Great also prided himself for his exchanges with foreign scientists and especially western European institutions of knowledge, travelling to England to learn shipbuilding and bringing experts back with him. By contrast, Putin’s rule has limited international exchanges between academic institutions, further isolating Russia’s academic community and curtailing independent research.
Finally, the map of the Russian empire at the time of Peter does not really coincide with Putin’s much greater territorial ambitions, though the tsar might have approved of its dimensions. Peter did found a southern colony on the Azov Sea, but it was one of his greatest failures.

In Peter’s era, most of the northern Black Sea Steppe was still controlled by the Ottoman empire and the Crimean Khanate, while the Polish-Lithuanian Commonwealth held lands all the way to Kyiv. Peter the Great’s reign therefore provides an unreliable blueprint for Putin’s autocratic ambitions.

Putin surely has many more appropriately jingoistic heroes to emulate than Peter the Great. Ivan IV “Grozny” the Terrible expanded the borders of Muscovy to the east. He is a favourite of Putin, who sees him and his father Ivan III as the “great gatherers of the [lost] lands of Rus” and who erected a statue to Ivan in Oryol in southwest Russia.

Catherine the Great is also one of his favourites: she conquered large parts of Ukraine – including the annexation of Crimea. On March 8 2022, for International Women’s Day, Putin made an address in front of a statue of Catherine, quoting her words in reference to his own invasion of Ukraine: “I will defend my homeland with my tongue, and with a pen, and with a sword, as long as I have enough life.”

But Putin’s values seem to align most with one of the Romanovs’ most autocratic leaders, Nicholas I (1825-1855). His military sin was losing the Crimean War (1853-56), but the tsar was also a Slavophile who defined Russia as an Orthodox nation fundamentally distinct from the growing liberalism and secularism that stirred 19th-century Europe. Nicholas I’s reign resisted foreign influence, and his imperial chauvinism was crystallised in the motto “autocracy, orthodoxy, nationality”.

Parallels abound between the brutal suppression of independence movements in the Russian empire and Russia’s contemporary reaction to the pro-democracy revolutions, especially in Georgia and Ukraine since 2008. Nicholas I used religion and nationalism to restrict civil liberties and stifle calls for democracy. Putin’s Russia seems just as conservative, with its incessant promotion of patriarchal family values, ever stricter homophobic laws, and a censorship regime that makes artistic expression and dissent almost impossible.

Ukraine’s position in this web of neo-imperial references is and has for a long time been problematic. Centuries of resistance have defined Ukrainian identity while Russian tsars have continuously opposed the possibility of a Ukrainian nation through military conquest and legal repression – including in 1876, banning the use of the Ukrainian language in print.

Ukrainian resistance and nationalism were essential to the fall of the Russian empire and to the collapse of the Soviet regime – an event that Putin views as the breakup of “historical Russia”. His calls to Peter the Great and other monarchs of the past illustrate how Russia’s war on Ukraine requires using history as a tool for policy. Having failed to offer his countrymen an appealing vision for Russia’s future, Putin has instead turned, disastrously, to an imperialist fantasy.

Olivia Durand receives funding from Freie Universität Berlin where she is a fellow.