Ukraine: how the UK press reported the Nazi invasion 1941-45 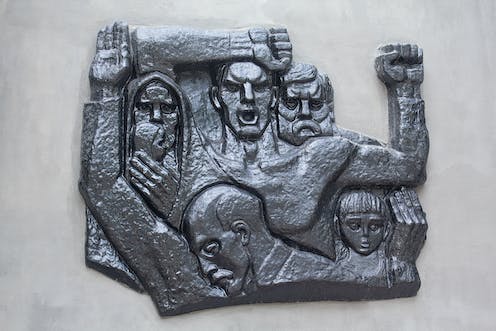 During the second world war there were notable exceptions to the at times slavish patriotic devotion the press showed to the government line. Weekly political titles such as New Statesman and Nation, the Spectator and the Economist challenged government policy more consistently than daily newspapers.

These titles were read by intellectuals and ministers tolerated the circulation of critical ideas amongst such people. The political weeklies served as safety valves. Ministers who worked to exclude unpalatable news from mass circulation newspapers treated their publication of intelligent dissent as a way to burnish Britain’s democratic credentials.

This reassured Britain’s most important ally, the USA. The Economist’s depiction of Ukrainian nationalism between 1941 and 1945 exemplifies such journalism.

Today, Vladimir Putin deploys a false account of Ukraine’s role during the second world war to justify his invasion, insisting that Russian forces invaded to cleanse Ukraine of Nazis. Taking a similar line to that pronounced by Adolf Hitler when Germany seized Czechoslovakia, he claims his army is protecting minorities from persecution.

Read more:
Putin's claim to rid Ukraine of Nazis is especially absurd given its history

But Putin’s claim is false, and it contrasts starkly with the one offered by his Soviet predecessor, Josef Stalin, 80 years ago. Stalin promoted evidence of Ukrainian heroism in resisting the Nazi invaders. British newspapers followed his line, reporting the courage of Ukrainians who fought Germans as partisans as well as Red Army troops.

When German forces entered Ukraine in 1941, the Soviet Union appealed to Ukrainians “to join up with the partisan bands or form new ones”. It urged them to wreak havoc and “kill the fascists like mad dogs”.

In ferocious fighting for a town identified only as “N”, partisans fought with “singular gallantry” alongside the Red Army. Volunteers recruited from factories “defended every street” and destroyed German tanks with hand grenades and petrol bombs.

The Economist, meanwhile, was more sophisticated, recognising that the picture wasn’t quite as simple as plucky Ukrainians rising to a man or woman to fight the invading hordes. Planning to use Ukrainian nationalism against Russia, Germany had trained right-wing Ukrainian nationalist fighters.

Hitler’s hope was that his armies would be backed by a mass rising of Ukrainians against the USSR. Instead, in its story of September 6, headlined “The Ukrainian Trump Card”, the Economist acknowledged that there were no “peasants greeting their German liberators with flowers” and that Ukrainians were meeting the Wehrmacht with “harassing fire” and “scorched villages”.

The article charted how Hitler betrayed the minority of Ukrainians who supported nationalist plans to create a fascist state, suggesting he had miscalculated the situation. By abandoning the “obscure circles of zealous Ukrainian nationalist conspirators” who had been Nazi Germany’s “prospective quislings” Hitler had “achieved a negative result”.

His was a strategic error, because there was “no lack of resentment” of the USSR in Ukraine. It was “beyond doubt” that scope existed to exploit Ukrainian nationalist sentiment in the German interest. But, Hitler had squandered this potential “trump card”.

The impression that Ukraine had turned emphatically against Germany was widely promoted in the mainstream British press. Moscow and London portrayed Ukrainians as dogged in defence of their territory.

Thus, as the Red Army fought to liberate Leningrad in February 1942, The Times reported, in a February 13 1942 article headlined: “Grapple for Leningrad” that Ukrainian partisans were harrying German forces “in conjunction with large raiding parties” of regular Red Army cavalry. Crucially, such depictions portrayed Ukrainian fighters as citizens of the USSR. Ukrainian nationalism was treated as a corrupt ideal sponsored and promoted by Germany.

A Reuters report of the liberation of Kharkov, carried in the Guardian on March 1 1943 under the headline: “How the Nazis Ruled Kharkov” reported that young Ukrainian men in Kharkov had been offered a choice between “being shot or fighting in German uniforms”.

German officers told them: “We have freed the Ukraine; now you must defend it”. The report concludes, “The Germans issued a lot of Ukrainian nationalist propaganda … but it is obvious that they have killed any vestige of Ukrainian separatism there may have been.”

Newspapers acknowledged the existence of the fascist Organisation of Ukrainian Nationalists. But they made it plain that most Ukrainians fought alongside the Red Army.

Thus Lieutenant Colonel Vysokostrosky, special correspondent of Red Star, the journal of the Red Army, told the Guardian on November 30 how Ukrainian partisans joined Soviet paratroops to “paralyse the German rear” as Russian forces fought to cross the Dnipro river.

Until Hitler invaded Russia, the British press had depicted Stalin as a bullying ogre, guilty of oppression and massacre. His Soviet Union was a vile aggressor, its army cruel and incompetent.

The turnaround described by the Times on June 23 1941 under the headline “How Russia was Told” when it told its readers that “one touch of Hitler makes the whole world kin” was embraced by the Ministry of Information and the newspapers it briefed. Once Britain and the USSR were allies, coverage of Russia and its leader became uncritical to the point of sycophancy.

Newspapers were reluctant to question the Russian depiction of Ukraine as a contented republic of the Soviet Union. British cinemas showed Russian films such as Battle of the Ukraine, and Partisans, which depicted heroic resistance in Ukraine. Newspapers portrayed Ukrainian nationalism as an exclusively Nazi creation.

In fact, the Ukrainian nationalist card was less formidable than the Economist imagined. They included 8,000 Ukrainian members of the Waffen SS Galizien Division and were guilty of atrocious war crimes. Pro-German nationalist forces were numerically insignificant compared with the 4.5 million Ukrainians who fought with the Red Army against Hitler.

The military value of Ukrainian nationalist backing for the Nazi cause was negligible. Nazi Germany’s major allies in the invasion of the USSR were Romania and Hungary. Putin’s insistence that Ukrainians are Nazis goes against historical fact and is profoundly cynical.

Nevertheless, in setting itself apart from mainstream newspapers that parroted Stalinist propaganda passed on by the British government, the Economist offered valuable context to those who wanted a deeper understanding of the conflict.

Tim Luckhurst has received research funding from News UK and Ireland Ltd. He is a member of the Society of Editors and the Free Speech Union and a member of the Editorial Board of The Conversation UK. His book, Reporting the Second World War – The Press and the People 1939-1945 will be published by Bloomsbury Academic on 9th February 2023