Ukraine celebrates Independence Day, with a new level of meaning as it fights back against Russia 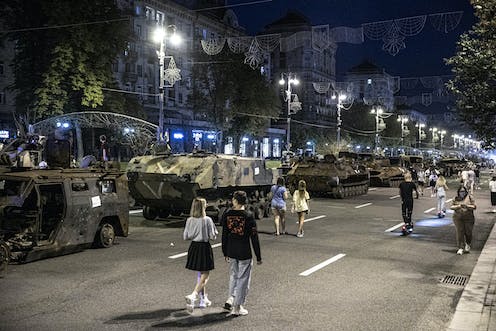 I stood on Kyiv’s main boulevard, Khreshchatyk, one year ago, on Aug. 24, 2021, celebrating along with thousands of Ukrainians who were watching the Independence Day parade.

The parade featured newly obtained weapons such as the lightweight missile systems known as Javelins. There were flyovers by Ukraine’s air forces, including the largest plane in the world at the time, known as the “Dream.”

At the time, Kyiv felt like a modern European city amid its thriving cafe culture and nightlife.

Many Ukrainians have long participated in building democracy in Ukraine. Most never anticipated that the greatest threat to their country would come in the form of a full-scale invasion by Russia, which came on Feb. 24, 2022. The fight to ensure Ukraine’s independence now looks quite different than it did just one year ago.

As a scholar of protest movements and democratic development in Ukraine, I think it is useful to understand Ukraine’s long history of seeking and preserving independence.

Ukrainians have never treated their country’s independence as a given.

The dissolution of the Soviet Union in 1991 led to the creation of the modern-day state of Ukraine. It has transformed dramatically in 30 years, but that fight for sovereignty has been waged for decades, if not centuries.

While Russia’s invasion is the gravest threat to modern Ukraine’s existence, Ukrainians over the years have demonstrated that they will resist and fight – no matter the odds.

In 2004, for example, Viktor Yanukovych claimed he had won presidential elections that international organizations and observers considered fraudulent. This prompted thousands of Ukrainians to protest Yanukovych’s claim to victory, until new elections were held and the rightful winner, Viktor Yushchenko, declared victory.

In late 2013 and early 2014, after Yanukovych had gained the presidency in a 2010 election, pro-democracy protesters fought his push toward much closer ties with Russia, in a movement known as Euromaidan. Demonstrators marched in the streets, at first to support formally cementing ties with the European Union – and then ultimately to remove Yanukovych from power. Yanukovych fled Ukraine and went to Russia in February 2014.

Ukrainians also took to the streets to fight for a better future two other times in the past three decades. From 2000 to 2001, protesters fought against corruption in then-President Leonid Kuchma’s administration. In 1990, students also organized pro-independence protests known as the Revolution on Granite.

Not just a recent trend

Independence has not just been a 21st-century phenomenon for Ukraine.

What is now Ukraine was part of the Russian Empire from the 1790s until the Russian Revolution began in 1917. In 1918, in the chaos of the Revolution, pro-Ukraine activists declared the political independence of the Ukrainian People’s Republic.

The language of Ukraine’s independence declaration of 1918 echoes statements made by Ukraine’s leaders today: “We want to live in peace and friendship with all neighboring states … but none of them has the right to interfere in the life of the independent Ukrainian republic.”

This republic continued to exist until 1921, when the Bolsheviks, the political group that established the Soviet Union, forcibly took over the territories of what is now eastern Ukraine. Soviet forces progressively took over the western half of the country following World War II, and by 1945, all of Ukraine was part of the Soviet Union.

Russia first interfered militarily in post-Soviet Ukraine in March 2014, when, following the Euromaidan protests, Russian soldiers invaded the Crimean Peninsula. Russia has long considered Crimea part of its own territory, since Catherine the Great annexed the peninsula in 1783. However, Crimea had been part of Ukraine since 1954 and an autonomous republic within Ukraine since 1991.

After Russia declared that Crimea was part of its country in 2014, Russian soldiers invaded Ukraine’s eastern Donetsk and Luhansk regions in support of Russian-backed separatist groups, which controlled the areas until February 2022. The war in this part of the country continued over the next eight years, killing 14,000 people through 2021.

This conflict in Ukraine’s eastern regions also prevented Ukraine from joining NATO and hindered its progress toward European Union membership, as those organizations would not accept Ukraine with an active conflict within its borders.

Thanks to extensive support from its Western allies, Ukraine’s military was drastically more prepared to meet Russia’s full-scale invasion in 2022 than most analysts had anticipated. The Javelins I saw at the 2021 Independence Day parade have been essential to Ukraine’s protection of its airspace.

But the “Dream,” an Antonov AN-225 Mriya airplane, was destroyed at the Hostomel airfield near Kyiv, just four days after Russia invaded Ukraine in February 2022.

This symbol of Ukraine’s advancement in recent years is now part of the record of Russia’s destruction of Ukraine, which includes entire cities such as Mariupol and Rubizhne, as well as the peaceful livelihoods of hundreds of thousands of people.

A different sort of Independence Day

Ukraine marks its 31st Independence Day on Aug. 24, 2022. This year, the holiday will not be a celebration of Ukraine’s victory – at least, not yet.

The war is in a stalemate, with Russia having taken over the vast majority of the far eastern regions and Ukrainian forces slowly trying to retake the southern territories. President Volodymyr Zelenskyy has banned all celebrations for Independence Day in 2022, cautioning Ukrainians that Russian forces may launch major attacks to mark the day.

Khreshchatyk, the main street of Kyiv that hosted a festive parade in 2021 and before, is now home to a graveyard of rusted, captured Russian military equipment.

Ukrainians are triumphantly posting videos and images of their strolls down the boulevard, past these hulking and disfigured signs of Russia’s failed attempt to snuff out Ukrainian independence.

Russia has finally gotten its military parade in Kyiv – just, perhaps, not in the form Russian President Vladimir Putin thought it would take.

Emily Channell-Justice does not work for, consult, own shares in or receive funding from any company or organization that would benefit from this article, and has disclosed no relevant affiliations beyond their academic appointment.