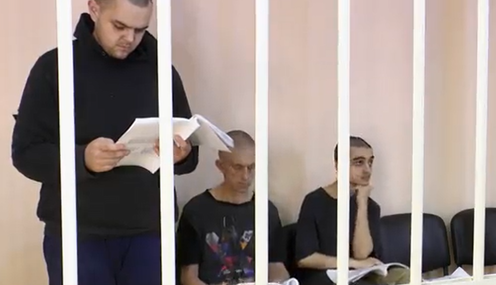 Two Britons captured while fighting in Ukraine’s armed forces have been sentenced to death after what has been condemned as a “show trial”. Aiden Aslin and Shaun Pinner, who surrendered to Russian forces during the siege of the Azovstal steelworks in Mariupol, were convicted on the charge of “being a mercenary”. They have a month to appeal and, if successful, they could receive a life or 25-year prison sentence instead of the death penalty.

Pro-Russian officials in the breakaway republic of Donetsk, where the trial was conducted, claimed the men’s actions had “led to the deaths and injury of civilians, as well as damage to civilian and social infrastructure”.

But what observers have called a “show trial” on “trumped-up charges” raises important questions both about their status under international law (specifically, whether they are entitled to prisoner of war status) and the compatibility of these trials with the rights that come with such status.

Are Aslin and Pinner prisoners of war?

The status of “prisoner of war” (POW) is legally protected, with a specific definition and rights that attach to it under international law. The Third Geneva Convention of 1949 and the First Additional Protocol of 1977 set out who is entitled to POW status, and how they must be treated by the state that detains them during an armed conflict.

Based on media reports, Aslin and Pinner appear to have been integrated into the Ukrainian armed forces, serving in the Marines (as opposed to merely fighting alongside them), having apparently been in Ukraine for several years.

This would suggest they fall squarely within the definition of persons entitled to POW status. It also means they are lawful “combatants” – a related status that entitles them to take part in hostilities against the enemy.

Russian officials have referred to all foreign fighters who fight alongside Ukraine as “mercenaries”. This is a legal term that denotes a foreign fighter who is not a member of a state’s armed forces but who fights alongside them in return for substantial monetary compensation.

While mercenaries are not entitled to POW status, the fact that Aslin and Pinner are officially members of the Ukrainian armed forces means that they are not mercenaries. Indeed, Aslin reportedly holds Ukrainian nationality.

In fact, those also travelling to Ukraine following the February invasion and joining its International Legion would not count as mercenaries and should be entitled to POW status, given they too are incorporated into the armed forces of Ukraine.

There appears little doubt, therefore, that Aslin and Pinner are entitled to combatant and POW status. The next question is whether this trial violated their rights that come with that status.

What are their rights?

Once you qualify for combatant and POW status, international law grants a long list of rights to which you are entitled when detained by the enemy state. One of these rights, which flows from the status of lawful combatant and the right to participate in hostilities, is the right not to be prosecuted for that participation, as long as no war crimes have been committed.

Combatants are protected from prosecution for what would otherwise be a domestic crime, such as homicide or destruction of property. The idea behind this rule is that individual enemy soldiers should not be punished for doing what the other side’s soldiers are also doing (fighting in a war on behalf of their country).

The charges against Aslin and Pinner are reported as follows: “committing a crime as part of a criminal group”, “forcible seizure of power or retention of power”, “being a mercenary” and “the promotion of training in terrorist activities”. The charges all appear to concern the mere fact of their joining the armed forces of Ukraine and fighting with them. To this extent, the prosecution of the two does violate their rights under international law that come from their status as combatants.

The right of combatants not to be prosecuted for participating in the war does not extend to war crimes, which states are obligated to prosecute. It has been reported that the two also stood accused of causing civilian deaths. But even if the charges against Aslin and Pinner had gone beyond the fact of their joining the Ukrainian forces, and alleged specific acts – such as war crimes – international law grants them very detailed fair trial rights as POWs. This includes a right to be tried by an independent and impartial court (a standard which the courts established in pro-Russian Donetsk have been shown not to meet).

Importantly, they can also only be prosecuted by the same courts and procedures applicable to Russia’s own armed forces. Given that Russia appears to have handed the two over to prosecuting authorities in the self-proclaimed separatist republic of Donetsk, the trial clearly violates this rule.

Based on what has been reported, the trial of Aslin and Pinner seems clearly to have violated their rights as combatants and POWs.

What are the consequences?

Enforcing these obligations against Russia is where the key difficulty lies. Various mechanisms have already been initiated to try to bring Russia and its agents before different courts, but they all face their own limitations. Wilfully depriving a POW of fair trial rights, or unlawfully transferring them, constitute war crimes, and the International Criminal Court is already investigating alleged war crimes in Ukraine (but this requires the perpetrators to be brought into ICC custody).

Individual POWs might also bring claims against the Russian government before the European Court of Human Rights (as many individuals have already done since February). But Russia’s compliance with any eventual judgments would be difficult to ensure.

Lawrence Hill-Cawthorne does not work for, consult, own shares in or receive funding from any company or organisation that would benefit from this article, and has disclosed no relevant affiliations beyond their academic appointment.