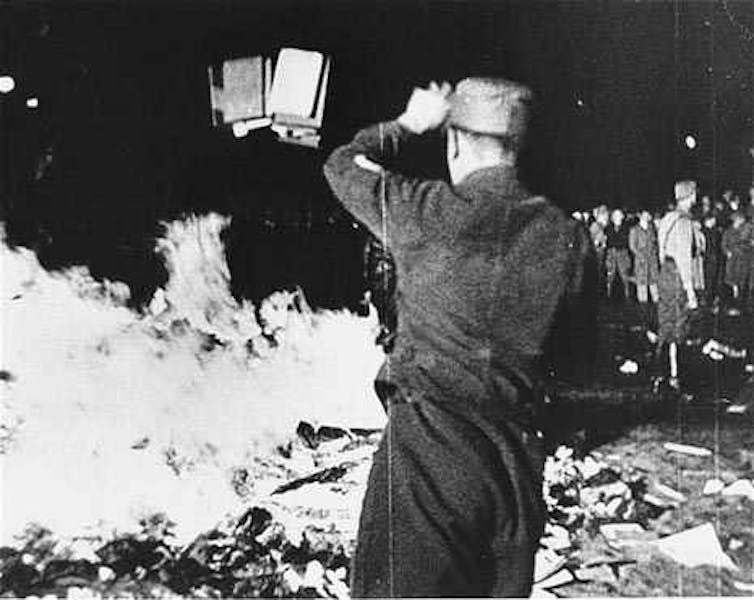 In recent decades, trans people have achieved limited rights. At the same time, anti-trans views and political backlashes have become more visible and effective in contesting those rights. For example, since 2009, according to the Independent Press Standards Organisation, there has been a 400% increase in reporting in trans issues accompanied by “increased hostility” in the media towards transgender people.

Meanwhile, politicians in the UK and US are campaigning on opposition to trans rights. A growing number of policies are preventing trans athletes’ participation in sports. And trans issues are at the heart of a divide within feminism itself.

Just as trans people are not a new population, backlashes against trans rights have a long history.

1. Nazi destruction of work on transsexuality

In 1923, German sexologist Magnus Hirschfeld, a gay man sympathetic to sexual and gender diversity, first named transsexuality, applying the term “psychic transsexualism” to one of his patients. Although now considered outdated in popular usage, this term was key to the understanding of trans identity. Hirschfeld pioneered the first transsexual surgical techniques at the Institute for Sexual Science in Berlin.

In 1933, the Nazis ransacked the institute, labelling Hirschfeld’s support for sexual and gender minorities an example of “degenerate Jewish sexuality”. The destruction of Hirschfield’s work, as trans musician and activist C.N. Lester writes, “set the emerging LGBT rights movement back by decades”.

From the 1940s, the term “transsexual” was popularised by Hirschfeld’s student Harry Benjamin. In his 1966 book, The Transsexual Phenomenon, Benjamin described transsexuality as an innate condition treatable by physical transition. Benjamin’s work established the first sex change programmes, providing the cross-sex hormones and surgery that enabled many people to transition.

However, to access this treatment, a diagnosis was required. Trans identity was pathologised (considered an illness) and in 1980 transsexualism was entered into the Diagnostic Statistic Manual of Mental Disorders (DSM) – the American Psychiatry Association’s “bible”.

Following activist campaigns, “gender dysphoria” replaced transsexualism and other renditions in the DSM in 2013. The new definition made clear that being trans is not in itself a mental health issue, unless accompanied by “clinically significant distress”. But the belief that being trans is a mental illness persists.

In the UK, the law didn’t explicitly prevent trans people from changing our legal sex until after a 1970 court case involving dancer and model April Ashley established a legal precedent.

Ashley married a British aristocrat, the Honourable Arthur Corbett, in 1963. When the marriage failed, Corbett sought an annulment to avoid having to pay Ashley maintenance following a divorce. After subjecting Ashley to traumatic medical examinations and questioning, Judge Roger Ormrod ruled that Ashley was male because it was impossible to change sex.

Christine Burns writes in her history of trans Britain that this led to all kinds of discrimination. Barred from trying to change our birth certificates, trans people were restricted in who they could marry and faced potential job dismissal and public shaming. Prison sentences would be served based on sex assigned at birth, not on gender.

In 2014, Time magazine proclaimed trans rights as “America’s next civil rights frontier”. This progress was due to decades of activism dating back at least to the Stonewall riots in New York City in 1969. The central trans contribution to Stonewall has only recently been publicly recognised.

This growing visibility has been met with moral panic, most notably in the form of legislation. In 2022, US states proposed dozens of bills limiting the rights of LGBTQ+ Americans, with about half specifically targeting trans people. These include restrictions on gender-affirming healthcare and “bathroom bills” refusing trans people the right to use bathrooms based on their gender.

Gender theorist Judith Butler, a longtime advocate for minority rights, suggests there is a link between the wave of anti-trans legislation and the overturning of the right to abortion in Roe v Wade. Butler sees both reversals as part of a conservative political reaction to progress in minority equality and education:

[This is] more serious and dangerous than a backlash. This is a “restoration project” … [of] patriarchy, white supremacy and exclusively heterosexual marriage.

Following a number of cases brought by trans rights organisations, the European Court of Human Rights ruled that the UK government’s refusal to allow trans people to change our birth certificate or marry was in breach of the right to respect for a private and family life, and to live free from discrimination.

This ruling led directly to the Gender Recognition Act (2004), which overturned the outcome of April Ashley’s case and allowed people with gender dysphoria to change their legal gender. However, it still required a medical diagnosis.

In 2016, the women’s and equalities parliamentary committee recommended that the government update the Gender Recognition Act to allow “gender self-declaration” – legally identifying one’s own gender without medical requirements – and to create a legal category for nonbinary/nongendered people. The government has not implemented the recommendations. Indeed, the recommendations themselves have been the focus of backlash from opponents, leading to the increased media attention and use of trans issues as a political tool.

Echoes of the past

These reactions are, in many ways, an old story. Some feminist opposition to gender-inclusive bathrooms and changing rooms repeats exclusion of trans women from women-only spaces in the 1970s. The call to control how sex and gender is taught in schools by contemporary Conservative politicians in the UK echoes their predecessors’ attempts to control the “promotion” of homosexuality through Section 28 in the 1980s.

As a recent landmark study found, there is strong support among the general population for progress in trans equality. Yet the backlash is stuck in the same old groove.

Jay Prosser does not work for, consult, own shares in or receive funding from any company or organisation that would benefit from this article, and has disclosed no relevant affiliations beyond their academic appointment.