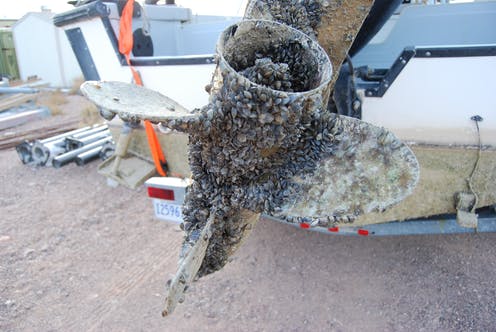 The zebra mussel has been a poster child for invasive species ever since it unleashed economic and ecological havoc on the Great Lakes in the late 1980s. Yet despite intensive efforts to control it and its relative, the quagga mussel, these fingernail-sized mollusks are spreading through U.S. rivers, lakes and bays, clogging water supply pipes and altering food webs.

Now, the mussels threaten to reach the country’s last major uninfested freshwater zones to the west and north: the Columbia River Basin in Washington and Oregon, and the waterways of Alaska.

As an environmental historian, I study how people’s attitudes toward nonindigenous species have changed over time. Like many other aquatic aliens, zebra and quagga mussels spread to new bodies of water when people move them, either accidentally or deliberately. Human-built structures, such as canals, and debris can also help invaders bypass natural barriers.

In my view, reducing the damage from these outbreaks – and preventing them if possible – requires understanding that human activities are the root cause of costly biological invasions.

European exploration of the Americas between the late 1400s and 1700s led to massive transfers of organisms, a process known as the Columbian exchange, named for Christopher Columbus. Many investors grew rich through shipping livestock and plantation crops across the oceans. Transatlantic travel also introduced microbes that caused infectious diseases, such as smallpox and measles, that killed millions of Native Americans who lacked immunity.

During the 19th century, European and North American colonizers established acclimatization societies to import desired species of foreign animals and plants to use for food, sport hunting or beautifying their environments. Many such efforts failed when the introduced species could not adapt to their new conditions and died off.

Others triggered legendary ecological disasters. For example, after the Victorian Acclimatisation Society released European rabbits in Australia in 1859, they multiplied rapidly. Feral rabbits and other introduced species like cats have destroyed millions of Australia’s native plants and animals.

During the late 19th and early 20th centuries, for example, Canada expanded the Welland Canal between Lake Ontario and Lake Erie to allow large ships to bypass Niagara Falls. By 1921, these technological improvements enabled the sea lamprey, a parasitic fish, to move from Lake Ontario into the upper Great Lakes, where it is still a serious threat to commercial fisheries.

In 1959, the U.S. and Canada opened the St. Lawrence Seaway, a maritime network that connects the Atlantic with the Great Lakes. Ocean-going ships using the seaway brought along stowaway species in ballast water – tanks full of water, used to keep the ships stable at sea.

When ships reached their destinations and flushed out their ballast tanks, they released alien plants, crustaceans, worms, bacteria and other organisms into local waters. In a milestone 1985 study, Williams College biologist Jim Carlton described how ballast water discharges provided a powerful vehicle for biological invasions.

Zebra mussels are native to the Black and Caspian Seas. They are thought to have entered North America in the early 1980s and were formally identified in the Great Lakes in 1988, followed by quagga mussels in 1989.

Mollusks are filter feeders that typically make water clearer. But zebra and quagga mussels filtered so much plankton from the water that they starved native mussels and fostered harmful algal blooms. The invaders also passed deadly type E botulism to fish-eating birds.

By the early 1990s, 139 alien species had become established in the Great Lakes, with almost one-third arriving after the St. Lawrence Seaway opened. Ship-related introductions, along with other pathways, such as aquaculture and aquarium and bait fish releases, transformed the Great Lakes into one of the world’s most invaded freshwater ecosystems.

The U.S. began regulating ballast water management in 1990 but had trouble closing loopholes. For instance, vessels declaring that they had no pumpable ballast water on board did not have to empty and refill their ballast tanks in the middle of a voyage with clean ocean water. As a result, live freshwater organisms lurking in tank sediments could still be released in vulnerable ports.

Finally, after comprehensive studies, the U.S. and Canada in 2006 required ships to flush tanks containing residual sediment with seawater. A 2019 assessment found that only three new species became established in the Great Lakes from 2006-2018, none of them via ship ballast.

Now, however, other human activities are increasingly contributing to harmful freshwater introductions – and with shipping regulated, the main culprits are thousands of private boaters and anglers.

Zebra and quagga mussels are moving west and south from the Great Lakes, attached to private boats or carried in bilge water and bait buckets. They have been found in Nevada, Arizona, California, Utah, Colorado and Montana.

If the mussels reach the Columbia River ecosystem, they will threaten native wildlife and irrigation pipelines and dams that are vital for agriculture and hydropower. Government officials, wildlife managers and scientists are working hard to prevent that from happening.

Public outreach is critical. Travelers who transport their boats without decontaminating them can transfer zebra and quagga mussels to inland rivers and lakes. The mussels can survive out of water in hot places for weeks, so it’s important for boaters and anglers to clean, drain and dry boating equipment and fishing gear.

Aquarium keepers can help stem the tide by disinfecting tanks and accessories in order to prevent accidental releases of live organisms into public waterways, and by being vigilant about their purchases. In 2021, zebra mussels were detected in imported moss balls sold as aquarium plants across the U.S. and Canada.

The U.S. Geological Survey maintains a website where people can report sightings of nonindigenous aquatic species, potentially spotting new infestations during the critical early phase before they become established.

Some of these efforts have shown encouraging results. Since 2008, Colorado has operated a rigorous boat inspection program that has kept zebra and quagga mussels out of state waters.

But prevention isn’t always popular. Officials closed the San Justo Reservoir in central California to the public in 2008 after zebra mussels were found there; residents argue that the closure has harmed the community and are lobbying the federal government to eradicate the mussels in order to reopen it for fishing.

Mitigating the destructive effects of invasive species is a complex mission that may not have an obvious endpoint. It requires scientific, technological and historical knowledge, political will and skill to persuade the public that everyone is part of the solution.

Christine Keiner does not work for, consult, own shares in or receive funding from any company or organization that would benefit from this article, and has disclosed no relevant affiliations beyond their academic appointment. 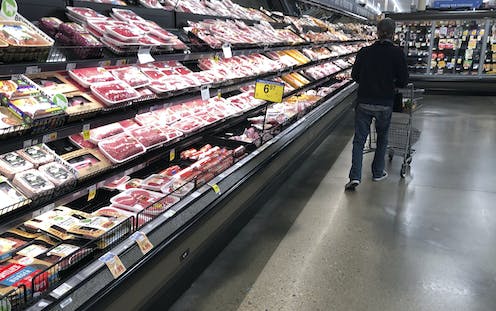