Sri Lanka’s crisis: Can the South Asian economy break from the past and find a route to stability? 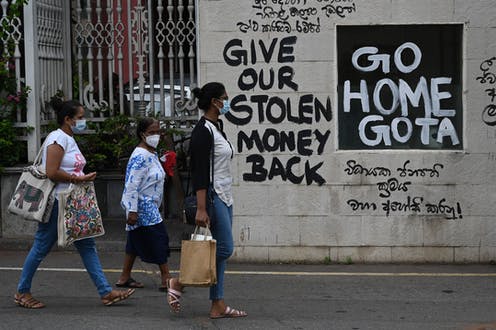 Sri Lanka has a new president and prime minister – but a change in who leads the crisis-hit South Asian nation alone will not solve the country’s severe economic problems.

Ranil Wickremesinghe – who on July 20, 2022, was voted in by lawmakers to replace fleeing former president Gotabaya Rajapaksa – and his appointed premier Dinesh Gunawardena inherit an economy grappling with record inflation as high as 59%, a currency that has lost almost half its value since March 2022 and severe shortages of daily necessities such as food and fuel. Nearly all economic activity in the country has ground to a halt.

The government’s deficit is so large it can’t afford to pay public workers, and the central bank has almost no foreign currency – needed to finance imports and pay back foreign debt.

In short, Sri Lanka is facing an unprecedented economic crisis, placing tremendous pressure on the new leaders to act fast to fix things.

As an economist and former official at the Central Bank of Sri Lanka, I believe the path forward will be difficult. The country will need to break with past policies and practices that put it in a financial hole while putting in place reforms to get the economy back on track. In particular, there are four key economic challenges the new government will have to address, though they’re all interconnected.

To avoid the fate of his now exiled predecessor Gotabaya Rajapaksa, President Wickremesinghe will have to address the immediate needs of his people.

After being sworn in, Wickremesinghe said his priority was to ensure that people are able to eat three meals a day.

While food inflation has reached 76%, prices of many basic food items have increased by a higher margin – rice by 160%, wheat flour by 200% and sugar by 164%. To put that in context, a preschool teacher earning minimum wage would need more than a day’s wages to purchase a kilogram (2.2 pounds) of sugar and a kilogram of wheat flour or rice. A cylinder of cooking gas, if they were lucky to find one, would cost more than a half-month’s salary.

Cost of living ranks alongside other pressing issues. Reopening the shuttered schools and universities is another priority. The other urgent need is restoring transportation services. With no fuel to purchase, private bus services are in limbo and public transportation has become an adventure ride, with passengers dangling from the door and windows and even sitting inside the luggage box.

Restoring transportation and electricity services requires foreign currency to import fuel, but support from the International Monetary Fund, which provides financial help to struggling economies through loan packages, is months away. Unless the new president can persuade its regional powerhouses – India and China – to provide more help, economic hardships will continue and life in Sri Lanka will not be normal.

In the past, Sri Lanka has been able to rely on tourism to help bring revenue to the island nation. But this will be impossible while social unrest continues and shortages of essentials limit the country’s ability to serve visitors. Meanwhile, remittances from overseas Sri Lankans have also suffered because of a lack of confidence in the national currency, known as the rupee.

As Wickremesinghe has noted, things will get worse before they get better.

The next item on the president’s to-do list will likely be finding a way to bring the budget deficit down. Last year, expenses were 240% of revenue, and 91% more was needed to repay debt. Money printing covered a large portion of this gap but only exacerbated inflation.

The primary reason for Sri Lanka’s current crisis is decades of fiscal mismanagement, with too much spending and too little revenue.

Fixing this problem will require a combination of higher taxes and significant budget cuts. But the budget gap is too wide to eliminate completely the need for money printing. The best that can be hoped for is an aggressive reduction.

Such budgetary reforms will likely be necessary to solve another challenge Sri Lanka faces: overseas debt.

Sri Lanka has amassed about US$51 billion in foreign debt over the past decades but has virtually no foreign currency with which to pay it back. The government suspended payments on foreign debt in April, sending it into default.

At the end of 2021, about 45% of the debt was owed to private investors, while the rest belonged to countries and multinational institutions. The Asian Development Bank owned the biggest share, at 16%, while Japan, China and the World Bank held 10% apiece.

For Sri Lanka to emerge from its crisis, it will need significant help from the IMF. But the IMF requires assurances that Sri Lanka’s debt sustainability be restored before lending it money.

And other international organizations, such as the World Bank, will not be willing to lend Sri Lanka more until the country signs an agreement with the IMF. And U.S. lawmakers have recently suggested IMF support will be contingent on Sri Lanka’s increasing the independence of its central bank, fighting corruption and doing more to promote the rule of law.

While G-7 countries, the group of leading economies, including Japan, appear willing to help Sri Lanka in its effort to restructure its debt, some bondholders – such as Caribbean-based Hamilton Reserve Bank, which holds just $250 million worth – have already taken legal action to claim their dues.

In May, Sri Lanka took a first step toward restructuring its debt, but it may take several months before the country is able to successfully negotiate with its creditors to ensure debt sustainability.

Wickremesinghe’s biggest and most unenviable challenge, however, is less about the economy and more about the politics of fixing it.

He won’t be able to do much about Sri Lanka’s economy until he’s able to bring about political stability. And right now, Sri Lanka remains in turmoil.

Wickremesinghe, who previously served as prime minister appointed by his toppled predecessor, will need a wide mandate and support from opposition politicians if he is to drastically change Sri Lanka’s policies. Upon election, he immediately urged his rivals to join him and “work together to bring the country out of the crisis,” adding, “Our divisions are now over.”

He will also need to address protesters’ demands over reducing executive powers while bringing in strong anti-corruption measures and strengthening democratic institutions.

Yet many doubt Wickremesinghe’s ability to unite Sri Lanka and question his mandate to serve out the remaining term of the presidency. He has been a target of protesters since being appointed president. And a confrontation between armed forces and protesters soon after Wickremesinghe took power doesn’t bode well.

Turning around an economy so deep in crisis will take time. Inflation in Sri Lanka is not believed to have peaked yet, and people will continue to face economic hardships for some time.

But political stability will be needed before Sri Lanka can get out of its economic mess. The fiscal reforms expected by the IMF will be painful and will be viable only with public support, and that of all major political parties in Sri Lanka’s Parliament.

Vidhura S Tennekoon was a former employee of the Central Bank of Sri Lanka.