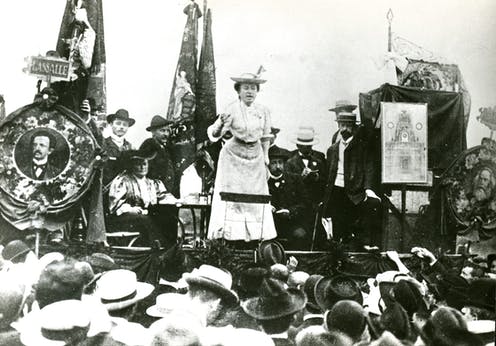 Russian President Vladimir Putin’s foreign minister, Sergei Lavrov, was asked in May 2022 how Russia could claim that Ukraine was run by Nazis, since Ukraine’s president, Volodymyr Zelenskyy, is Jewish.

Lavrov’s response: “So what if Zelenskyy is Jewish? The fact does not negate the Nazi elements in Ukraine.” In fact, he claimed, Hitler himself had “Jewish blood,” and “the most ardent antisemites are usually Jews.”

Lavrov deliberately used offensive language aimed at a Ukrainian president who happens to be Jewish; his comments sparked an international uproar. Israel’s Foreign Minister, Yair Lapid, said in a statement, “The lowest level of racism against Jews is to accuse Jews themselves of antisemitism.”

Antisemitism has been used as a weapon against leading Jewish politicians in Europe for over a century, no matter how assimilated they were into their respective societies. As I wrote in my book, “In Hitler’s Munich: Jews, the Revolution, and the Rise of Nazism,” verbal attacks were often followed by physical assaults, and Jews served as scapegoats for all kinds of societal ills.

In Germany, the three most prominent Jewish leaders after World War I – the communist revolutionary Rosa Luxemburg; the moderate socialist founder of the Free State of Bavaria, Kurt Eisner; and the moderately conservative German foreign minister, Walther Rathenau – were all assassinated only a few months after they reached the heights of their political careers.

Polish-born Luxemburg was assassinated in January 1919, together with her non-Jewish comrade-in-arms, Karl Liebknecht. Her body was found in Berlin’s Landwehr Canal. Both were leaders of the newly established Communist Party in Germany and hoped for a socialist uprising in the early days of the Weimar Republic.

Even though Luxemburg distanced herself from her Jewish heritage and refused to recognize any “special suffering of the Jews,” anti-Jewish tropes were often part of the fierce attacks against her.

“Knock down Walther Rathenau – the God-damned Jewish sow!” was one of the most vitriolic anti-Jewish slogans of hate in the early years of the Weimar Republic. In fear for Rathenau’s life, Albert Einstein and the president of Germany’s Zionist organization, Kurt Blumenfeld, spent a long night at Rathenau’s house, trying to convince him that Germany was not ready for a Jewish foreign minister and that he should resign.

Rathenau did not heed their advice. Two months later he was shot dead.

‘King of the Jews’

The case of Kurt Eisner, the founder of the Free State of Bavaria, deserves special attention for its connection to the rise of Adolf Hitler.

Eisner took office as prime minister of Bavaria – equivalent to a state governor in the U.S. – in November 1919 as the result of a peaceful revolution that ended the 700-year rule of the Wittelsbach dynasty. The last Bavarian king fled the country. With the help of newly established councils of workers, farmers and soldiers, the socialist Eisner proclaimed the Free State of Bavaria, a semi-autonomous part of Germany.

Eisner was the first Jew ever to be head of a German state. He had to deal with a campaign of defamation that came from well beyond the narrow circles of dedicated right-wing extremists.

The Berlin-born Eisner was widely described by his detractors as an East European Jew whose real name was sometimes given allegedly as Salomon Kosmanowsky, Koschinsky or another supposedly Jewish-sounding name. Among those who denounced him were respected conservative politicians and the papal nuncio in Munich, Eugenio Pacelli, who would later become Pope Pius XII.

In Eisner’s papers in a Berlin archive is a bundle of two thick files with hundreds of mostly anonymous antisemitic hate letters against Eisner, which contain frequent incitements to violence. They include a postcard addressed to the “Hebrew Residence” and a letter to the “King of the Jews” which says: “Control yourself, or disappear to the country where you belong, to Palestine! The broad masses of the German people will eradicate you, something one person can accomplish!”

The tenor of all the letters was that Eisner is, as one letter said, “after all, a Jew, not a German.”

It was by no means only radical antisemites who participated in this campaign. The writer and later Nobel Prize winner Thomas Mann was the son-in-law of the mathematician Alfred Pringsheim, one of the few Jewish professors at the University of Munich. Despite Mann’s Jewish-born wife, Katia, and his connection to the Pringsheims, Mann expressed his disgust about the prominent role of Jews and the “big-city piss elegance of the Jew-boy” leading to a “Jew regiment.”

And as early as Nov. 8, 1918, Mann asked in his diary: “Both Munich and Bavaria governed by Jewish scribblers. How long will the city put up with that?”

Three months after he became prime minister during the revolution, Eisner was assassinated while on the way to the Bavarian parliament with a letter of resignation in his pocket, after his party had lost the subsequent elections.

The Bavarian revolution was followed by two short-lived Soviet-style republics with a few additional prominent Jewish leaders, and a brutal conservative reaction. These developments might have remained nothing more than a footnote in history were it not for the fact that all of this was witnessed by a young Adolf Hitler, who had just returned to Munich from fighting in World War I.

Hitler would later claim in “Mein Kampf” that it was the “Jewish rule” he had witnessed during this time that inspired his early political activities including his leadership role of the Nazi party, founded in Munich shortly after the Bavarian revolution.

From Munich to Kyiv

After the Holocaust, European Jewry was reduced to a mere shadow of its prewar size. There were only a handful of Jewish political leaders, among them a couple of short-term prime ministers of France, and most prominently Bruno Kreisky, chancellor of Austria from 1970 to 1983. In contrast to Rathenau, who was shot after three months in office, Kreisky was reelected several times.

Official antisemitism was taboo in post-Holocaust Europe, and the voices who criticized Kreisky for his Jewish background did so indirectly. Kreisky had a difficult relationship with his own Jewish heritage. He invited former Nazis to his government and distanced himself from Austria’s Jewish community. He called Israeli Prime Minister Menachem Begin “a little lawyer from Warsaw with a soul of a small-minded shopkeeper” while at the same time becoming the first West European politician to embrace PLO leader Yasser Arafat. The most famous Jew in postwar Vienna, Nazi hunter Simon Wiesenthal, and Kreisky shared a well-known aversion for each other.

The first Jewish leader of a European state who speaks openly about his own Jewishness is Ukraine’s Volodymyr Zelenskyy. Zelenskyy is president of a country that is certainly not free of its own antisemitic tradition.

The antisemitic attacks on Zelenskyy, who might one day be remembered as the most popular Jewish hero of this era, now come from outside the country. As a historian of European Jewish history and antisemitism, I believe they are designed to foment hate and undermine his extraordinary leadership in the face of an unsolicited attack on a free nation.

The fate of today’s Jewish politicians in Europe will most likely not be as tragic as Eisner’s, Rathenau’s and Luxemburg’s. But as the Russian attacks on Zelenskyy demonstrate, in times of conflict, the Jewish background of a leader can be used as part of a broader political and wartime strategy of defamation.

This latest version, originating in the Kremlin, is just a new, perfidious variant of the old virus called antisemitism.

Michael Brenner does not work for, consult, own shares in or receive funding from any company or organization that would benefit from this article, and has disclosed no relevant affiliations beyond their academic appointment.