Pope Francis: perhaps it is time for him to retire – here’s what it could mean for the future of the papacy 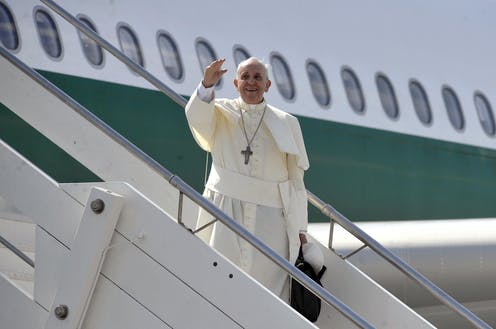 Pope Francis was recently forced to deny rumours that he was about to retire, instead making clear that he has no plans to step down just yet.

But the 85-year-old Catholic leader, currently in Canada, has again been filmed using a wheelchair. Indeed, in an interview before his trip, the pope left open the possibility of retirement if his health fails him.

Francis would be only the third pope in history to retire, but the second in a row. The resignation of Pope Benedict in 2013 caught the assembled cardinals off guard.

Whether or not Francis resigns, it raises important questions about the future of the papacy in the face of medical advances and the changing realities of ageing.

Given the spiritual significance of a “good” death, it is not unusual for religious leaders to die in office. Many will remember the huge crowds that gathered on St Peter’s Square and around the world during Pope John Paul II’s final illness.

For Catholics, there are compelling theological reasons why a pope should remain in office until his death. As universal shepherd, successor to St Peter and vicar of Christ, the pope both embodies the Church as a whole and provides a visible, seemingly uninterrupted link to origins that are said to go back, via Peter, to Jesus Christ. Multiple (current and retired) living popes can pose a challenge to this traditional view of the Catholic Church with a single, indivisible head.

More easily overlooked, but just as important for this papal tradition of dying in office, is the pope’s position as the temporal ruler of Vatican City – and with it, the method of papal elections. Although Pope Francis governs a minuscule territory, he is nevertheless Europe’s last absolute monarch.

For centuries, Rome’s aristocratic families competed for St Peter’s throne and control over papal states that once occupied much of central Italy. Some papal reigns – Paul III and Urban VIII, for instance – were notorious for their corruption and nepotism. Inevitably, the family’s power and influence ended with a pope’s death and therefore discouraged their resignation regardless of their health.

While modern popes have clearly not enriched their families in the same way, the method of election has not meaningfully changed. Neither have the motives of the electors, the college of cardinals. A pope’s death still provides them with a rare opportunity to wield influence – and, for the papabile (“pope-able”) among them, the ultimate career progression.

The cardinals, therefore, have long had an incentive to choose an older pope. Old age may also make a candidate a suitable compromise between deadlocked factions, keen to revisit their options sooner than later. The same strategy of electing hopefully short-lived men could be effective during times of crisis too.

Human mortality and elective monarchy, therefore, explain why popes have usually been old men, especially by the standards of their own day. Francis and Benedict were 76 and 78, respectively, when they were elected (John Paul II, aged 58, was an outlier in this respect).

Air travel and the rise of mass media have also reshaped the modern papacy. Paul VI (who reigned from 1963 to 1979) became the first pope to leave Italy since Napoleon’s conquest of Rome, and the first to visit the US, Australia and Israel. The media-savvy and still more well-travelled John Paul II quickly became known as the “superstar” pope. And these days, every papal move, comment and announcement can be followed by the faithful on Twitter and YouTube.

Modernity may still prove to be the papacy’s poisoned chalice, however. Technological advances have transformed the papacy, increasing its visibility and creating expectations among the faithful that popes may struggle to meet. The demands of social media coverage and communication are constant, and a less familiar part of life for ageing popes who may struggle to deliver them.

As the role has become more dynamic and burdensome, advances in human medicine pose an ever greater challenge when people are living longer, but good health in old age is not keeping pace.

In 2013, Benedict XVI, then the same age as Pope Francis is now, no longer felt able to carry the burden of his office. His resignation demonstrates the church’s predicament.

Now, Benedict’s occasional pronouncements, such as his views on clerical celibacy, have made him into a thorn in Francis’s side. His retirement home has even been presented as the unofficial headquarters of the opposition. To stem the proliferation of rival power centres, Pope Francis may well wish to stay in the post, if only to keep the number of popes emeritus to a minimum.

Yet, currently aged 95 and extremely frail, Benedict’s poor health also illustrates the difficult situation the Church would have faced had he not retired. The Catholic Church is in retreat even in Latin America, Pope Francis’s home region, challenged by secularisation and burgeoning evangelical churches. The need for an active and energetic – and therefore probably younger – papacy has never been clearer.

With human lifespans set to increase still further – possibly to as much as 150 years – Pope Francis and the cardinals who elect his successor have difficult decisions to make.

Two papal retirements in succession would set something of a precedent. The Catholic Church values tradition, but if younger popes and papal retirements become the norm, then the church of the future could look very different.

There are no easy solutions. A more dynamic, younger papacy may well be an urgent necessity. For cardinals, entrusting the papacy to a younger man is a risky proposition – they may have to sacrifice their authority for a long time to come. But if a younger papacy results in a coterie of retired popes, this may paradoxically also undermine the very traditions that have legitimised papal authority for so long.

Jan Machielsen does not work for, consult, own shares in or receive funding from any company or organization that would benefit from this article, and has disclosed no relevant affiliations beyond their academic appointment.