Poland’s warm welcome to about 2 million Ukrainian refugees draws global praise, but it might not be sustainable 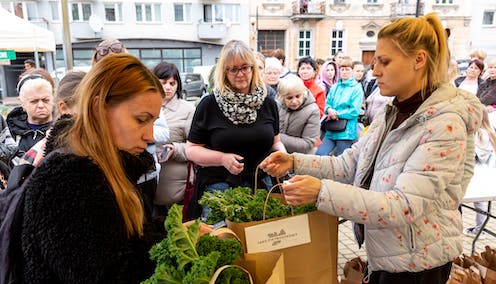 As Russia’s attack on Ukraine neared its six-month mark on Aug. 24, 2022, The Conversation asked Patrice McMahon to share her observations about how Poland is responding to the arrival of around 2 million Ukrainian refugees. McMahon, a political scientist at the University of Nebraska-Lincoln who studies humanitarianism and nongovernmental organizations, spent five weeks in Poland in the summer of 2022 conducting on-the-ground research.

Where did you go and what did you see?

I went to Poznań, Lublin, Warsaw, Krakow and several smaller cities along the Poland-Ukraine border to see the places where the largest numbers of
refugees had arrived. It’s a very well-managed humanitarian response across the board. I saw no chaos. There were no obviously homeless people on the streets, and no Ukrainians asked me for money.

Instead, I encountered many ordinary Polish citizens who are hosting Ukrainian refugees in their homes, giving them money from their own pockets and volunteering their time to ensure that those people integrate into Polish society.

In Poznań, I met one Polish family that was taking care of three Ukrainian women and their children – a total of 10 people. The families are safely in Poland, with a place to stay, but they still need help finding child care, furnishing their apartments, getting jobs and everything else. Like many Polish families, the family I met wants to help Ukrainians make a life in Poland.

What I didn’t see were any refugee camps.

In some places, friends or neighbors have converted empty houses or public buildings into a shelter for large numbers of Ukrainian refugees. As a social worker in Warsaw explained to me, “Civilized countries do not let women and children sleep on the streets.”

Felipe González Morales, the United Nations Special Rapporteur on the human rights of migrants, acknowledged in July 2022 the generosity of Polish citizens. He observed that most of these refugees are being housed by Polish citizens, and while most have applied for financial assistance, some Poles are covering the expenses themselves.

What roles are Poland’s federal and local governments playing?

I was stunned, in a good way, by the Polish government’s generosity. Ukrainians are able to live in Poland legally for 18 months, and the government is giving them access to the country’s social welfare system.

The Polish government responded quickly when the refugees began to arrive, and developed a plan for action.

On March 12, 2022, just over two weeks after the Russian invasion began on Feb. 24, the Polish parliament adopted a comprehensive law that provided Ukrainians fleeing the war with protection and the right to work in Poland. Ukrainian refugees also have full access to free health care and public education, which spans not just K-12 instruction but also access to university enrollment. The Polish government is also giving Ukrainian families one-time payments of 63 euros to help cover expenses like food and school supplies.

I found that in many ways they have been more central to the relief effort. In the city of Lublin, for example, the Social Committee to Aid Ukrainians was established within hours of the war starting.

This coalition of organizations and citizens continues to provide 24-hour assistance, meals, legal assistance, child care and translation assistance, among other services. Other cities provide different levels of support, but this is separate from and unsupported by the national government.

Every city is organizing relief and integration differently, but all are actively working with local civil society organizations, health care professionals and citizens groups.

There is a rub, though. Many cities are led by mayors from opposition parties, and they complain that the national government is getting all the credit for this well-managed crisis while they are the ones paying for and doing the work.

According to Krzysztof Kosiński, the mayor of Ciechanów, a small town in central Poland, his city has not received any money from the national government to spend on aid for refugees. Local officials want more international support and recognition to go to the people who are doing the work – local governments and private citizens.

How long do you think this situation can continue?

Several Poles told me that they and others who are supporting Ukrainian refugees are at a breaking point.

According to one estimate, private Polish citizens spent more than US$2 billion to help during the first three months of the war. I heard from many people that they were no longer receiving any compensation from the government.

Poland is not a rich country. Like elsewhere, its economy is being rocked by price increases. Polish inflation is the highest it has been since 1997, at 16%, and energy prices in particular are soaring.

Many of the Poles who stepped up to help Ukrainian refugees no longer have the money or energy to continue. The time of no refugee camps may be coming to an end.

Is Poland getting funds from abroad to support these efforts?

Poland has received significant funds from abroad. The United States alone has provided almost $50 million to Poland for the relief effort.

The United Nations has created an elaborate guide to help countries and organizations identify the many needs of refugees and which agencies and organizations will help meet them. But the guide was launched three months after the war began, when local efforts were already underway. The guide, more importantly, did not come with money for these organizations to meet these identified needs.

Throughout the region, there has been a problem getting money to local groups from donor countries like the United States and international organizations like the United Nations, CARE, Oxfam and Plan International. After a donor conference in May 2022, the country director of the Norwegian Refugee Council reminded conference participants that they needed to deliver on their promises by ensuring that money gets to front-line volunteers and local groups.

There are not many evaluations of the humanitarian response to Ukraine, but one report by the U.K. Humanitarian Innovation Hub, which is funded by the British government, specifically noted that after three months, most of the international donor money was sitting unused due to “compliance requirements” that are too onerous for small groups of volunteers to meet.

Many of the Poles I interviewed, including some outspoken mayors, noted these same problems and the mismatch between those who have the money and those work are doing the work.

I will soon return to Poland as a Fulbright scholar to better understand why so many Poles stepped up to help Ukrainian refugees and how governments are partnering with community organizations and private citizens in those efforts to support people fleeing from a neighboring war zone.

Patrice McMahon does not work for, consult, own shares in or receive funding from any company or organization that would benefit from this article, and has disclosed no relevant affiliations beyond their academic appointment.