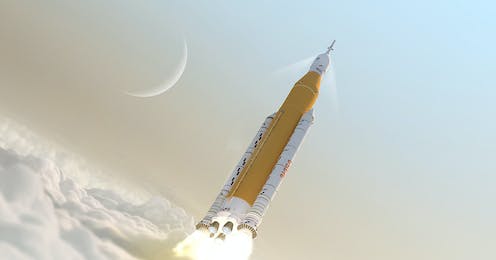 NASA’s Artemis 1 mission is poised to take a key step toward returning humans to the Moon after a half-century hiatus. The launch was scheduled for the morning of Aug. 29, 2022 but was postponed due to an issue with one of the rocket’s engines. The next opportunity to launch the rocket is Sept. 2, 2022. The mission is a shakedown cruise – sans crew – for NASA’s Space Launch System and Orion Crew Capsule.

The spacecraft is scheduled to travel to the Moon, deploy some small satellites and then settle into orbit. NASA aims to practice operating the spacecraft, test the conditions crews will experience on and around the Moon, and assure everyone that the spacecraft and any occupants can safely return to Earth.

The Conversation asked Jack Burns, a professor and space scientist at the University of Colorado Boulder and former member of the Presidential Transition Team for NASA, to describe the mission, explain what the Artemis program promises to do for space exploration, and reflect on how the space program has changed in the half-century since humans last set foot on the lunar surface.

How does Artemis 1 differ from the other rockets being launched routinely?

Artemis 1 is going to be the first flight of the new Space Launch System. This is a “heavy lift” vehicle, as NASA refers to it. It will be the most powerful rocket engine ever flown to space, even more powerful than Apollo’s Saturn V system that took astronauts to the Moon in the 1960s and ‘70s.

It’s a new type of rocket system, because it has both a combination of liquid oxygen and hydrogen main engines and two strap-on solid rocket boosters derived from the space shuttle. It’s really a hybrid between the space shuttle and Apollo’s Saturn V rocket.

Testing is very important, because the Orion Crew Capsule is going to be getting a real workout. It will be in the space environment of the Moon, a high-radiation environment, for a month. And, very importantly, it will be testing the heat shield, which protects the capsule and its occupants, when it comes back to the Earth at 25,000 miles per hour. This will be the fastest capsule reentry since Apollo, so it’s very important that the heat shield function well.

This mission is also going to carry a series of small satellites that will be placed in orbit of the Moon. Those will do some useful precursor science, everything from looking further into the permanently shadowed craters where scientists think there is water to just doing more measurements of the radiation environment, seeing what the effects will be on humans for long-term exposure.

What’s the goal of the Artemis project? What’s coming up in the series of launches?

The mission is a first step toward Artemis 3, which is going to result in the first human missions to the Moon in the 21st century and the first since 1972. Artemis 1 is an uncrewed test flight.

Artemis 2, which is scheduled to launch a few years after that, will have astronauts on board. It, too, will be an orbital mission, very much like Apollo 8, which circled the Moon and came back home. The astronauts will spend a longer time orbiting the Moon and will test everything with a human crew.

And, finally, that will lead to a journey to the surface of the Moon in which Artemis 3 – sometime mid-decade – will rendezvous with the SpaceX Starship and transfer crew. Orion will remain in orbit, and the lunar Starship will take the astronauts to the surface. They will go to the south pole of the Moon to look at an area scientists haven’t explored before to investigate the water ice there.

Artemis is reminiscent of Apollo. What has changed in the past half-century?

The reason for Apollo that Kennedy envisioned initially was to beat the Soviet Union to the Moon. The administration didn’t particularly care about space travel, or about the Moon itself, but it represented an audacious goal that would clearly put America first in terms of space and technology.

The downside of doing that is the old saying “You live by the sword, you die by the sword.” When the U.S. got to the Moon, it was basically game over. We beat the Russians. So we put some flags down and did some science experiments. But pretty quickly after Apollo 11, within a few more missions, Richard Nixon canceled the program because the political objectives had been met.

So fast-forward 50 years. This is a very different environment. We are not doing this to beat the Russians or the Chinese or anybody else, but to begin a sustainable exploration beyond Earth’s orbit.

The Artemis program is driven by a number of different goals. It includes in situ resource utilization, which means using resources at hand like water ice and lunar soil to produce food, fuel and building materials.

The program is also helping to establish a lunar and space economy, starting with entrepreneurs, because SpaceX is very much part of this first mission to the surface of the Moon. NASA doesn’t own the Starship but is buying seats to allow astronauts to go to the surface. SpaceX will then use the Starship for other purposes – to transport other payloads, private astronauts and astronauts from other countries.

Fifty years of technology development means that going to the Moon now is much less expensive and more technologically feasible, and much more sophisticated experiments are possible when you just figure the computer technology. Those 50 years of technological advancement have been a complete game-changer. Almost anybody with the financial resources can send spacecraft to the Moon now, though not necessarily with humans.

NASA’s Commercial Lunar Payload Services contracts private companies to build uncrewed landers to go to the Moon. My colleagues and I have a radio telescope that’s going to the Moon on one of the landers in January. That just wouldn’t have been possible even 10 years ago.

What other changes does Artemis have in store?

The administration has said that in that first crewed flight, on Artemis 3, there will be at least one woman and very likely a person of color. They may be one and the same. There may be several.

I’m looking forward to seeing more of that diversity, because young kids today who are looking up at NASA can say, “Hey, there’s an astronaut who looks like me. I can do this. I can be part of the space program.”

This article was updated on Aug. 29, 2022 to indicate that the launch was postponed.