Monkeypox vaccines: A virologist answers 6 questions about how they work, who can get them and how well they prevent infection 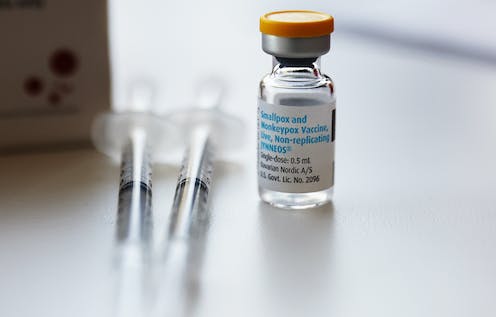 Monkeypox isn’t going to be the next COVID-19. But with the outbreak having bloomed to thousands of infections, with cases in nearly every state, on Aug. 4, 2022, the U.S. declared monkeypox a national public health emergency. One reason health experts did not expect monkeypox to become so widespread is that the U.S. had previously approved two vaccines for the virus. Maureen Ferran, a virologist at Rochester Institute of Technology, has been keeping tabs on the two vaccines that can protect against monkeypox.

1. What are the available monkeypox vaccines?

Two vaccines are currently approved in the U.S. that can provide protection against monkeypox, the Jynneos vaccine – known as Imvamune/Imvanex in Europe – and ACAM2000, an older smallpox vaccine.

The Jynneos vaccine is produced by Bavarian Nordic, a small company in Denmark. The vaccine is for the prevention of smallpox and monkeypox disease in adults ages 18 and older who are at high risk for infection with either virus. It was approved in Europe in 2013 and by the U.S. Food and Drug Administration in 2019.

The Jynneos vaccine is given in two doses four weeks apart and contains a live vaccinia virus. Vaccinia normally infects cattle and is a type of poxvirus, a family of viruses that includes smallpox and monkeypox. The virus in this vaccine has been crippled – or attenuated – so that it is no longer able to replicate in cells.

This vaccine is good at protecting those who are at high risk for monkeypox from getting infected before exposure and can also lessen the severity of disease post-infection. It is effective against smallpox as well as monkeypox. Until the recent monkeypox outbreak, this vaccine was primarily given to health care workers or people who have had confirmed or suspected monkeypox exposure.

The U.S. government has over 200 million doses of ACAM2000 stockpiled in case of a biological weapon attack of smallpox. But despite the adequate supply of the vaccine, ACAM2000 is not being used to vaccinate against monkeypox because of the risk of serious adverse side effects. For now, only designated U.S. military personnel and laboratory researchers who work with certain poxviruses may receive this vaccine.

2. How effective are these vaccines?

According to the U.S. Centers for Disease Control, there is not yet any data available on the effectiveness of either vaccine in the current outbreak of monkeypox. But there is older data available from animal studies, clinical trials and studies in Africa.

A number of clinical trials done during the approval process for the Jynneos vaccine show that when given to a person, it triggers a strong antibody response on par with the ACAM2000 vaccine. An additional study done in nonhuman primates showed that vaccinated animals that were infected with monkeypox survived 80% to 100% of the time, compared with zero to 40% survival in unvaccinated animals.

Another use of the Jynneos vaccine is as a post-exposure prophylaxis, or PEP, meaning the vaccine can be effective even when given after exposure to the virus. Because the monkeypox virus incubates in a person’s body for six to 14 days, the body of someone who gets the Jynneos vaccine shortly after being exposed will produce antibodies that can help fight off infection and protect against a serious monkeypox case.

The ACAM2000 data is older and less precise but shows strong protection. Researchers tested the vaccine during an outbreak of monkeypox in central Africa in the 1980s. Although the study was small and didn’t directly test vaccine efficacy, the authors concluded that unvaccinated people faced an 85% higher risk of being infected than vaccinated people.

3. Does a smallpox vaccine protect against monkeypox?

According to the CDC, a previous smallpox vaccination does provide some protection against monkeypox, though that protection wanes over time. Experts advise that anyone who had the smallpox vaccine more than three years ago and is at increased risk for monkeypox get the monkeypox vaccine.

4. Who should get vaccinated?

At the national level, anyone who has had close contact with an infected person, who has a weakened immune system or who had dermatitis or eczema is eligible for a Jynneos vaccine.

Some state and local governments are also making vaccines available to people in communities at higher risk for monkeypox. For example, New York City is allowing men who have sex with men and who have had multiple sexual partners in the past 14 days to get vaccinated.

5. What is the supply like for the Jynneos vaccine?

As of July 29, 2022, a little over 300,000 doses have been shipped to points of care or administered, with another 700,000 already allocated to states across the U.S. However, demand is far outpacing supply. Public health officials acknowledge that vaccine supply shortages have resulted in long lines and clinics having to close when they run out of vaccines. The issues have been magnified by technical problems with online booking systems, particularly in New York City.

To help boost supply, the U.S. has ordered nearly 7 million doses of the Jynneos vaccine, which are expected to arrive over the coming months.

6. What about just using one dose of Jynneos?

A previous study reported that a single shot of the Jynneos vaccine protected monkeys infected with monkeypox and that this protection lasted for at least two years. If this holds up in the real world, it would support withholding second doses in favor of immunizing more Americans. This would be key as many health experts expect the virus to continue spreading, furthering increasing demand of the vaccine.

Maureen Ferran receives funding from the National Institutes of Health.