Monkeypox is now a national public health emergency in the U.S. – an epidemiologist explains what this means 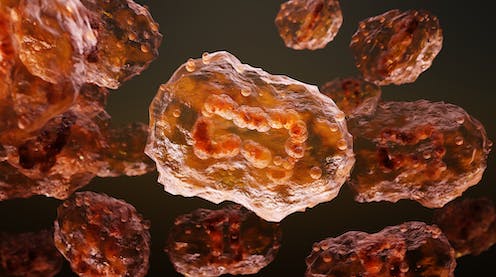 There have not yet been any monkeypox deaths in the U.S., but more than 7,000 cases have been diagnosed thus far, and the spread of the virus to nearly every state is concerning. While most cases are still occurring among men who have sex with men, the virus is also transmitted through nonsexual skin-to-skin contact, so there is a risk of people in other population groups contracting the infection. The federal declaration is intended to help slow the spread of the virus among men who have sex with men and stop it from spreading to new communities.

What is a public health emergency?

Presidents and state governors have the authority to declare states of emergency when there is a potentially life-threatening situation and the resources routinely allocated to the responding agencies are insufficient for dealing with the situation.

In late July, 2022, for example, the governor of Kentucky declared a state of emergency following devastating flooding in the eastern part of the state. The governor requested and received federal assistance to help respond to the floods. The declaration didn’t mean that more flooding was expected. It just made extra resources available for rescuing stranded individuals and providing essential services, like shelter and drinking water, to displaced people.

Similarly, the monkeypox emergency declaration doesn’t mean that the government expects millions more cases in the next month. It is about helping health agencies get the vaccines and other tools they need to slow the spread of the virus.

Does the public health emergency call for public action?

No. The main thing the emergency declaration does is enable the U.S. Department of Health and Human Services to get more of the funding and other resources that it needs to protect the public from a more widespread monkeypox outbreak. At this point, monkeypox is an emergency for the U.S. government’s public health agencies to deal with. It is not an emergency for the public right now. The goal of the emergency declaration is to prevent monkeypox from becoming a more widespread threat to public health.

What will the US government do now?

According to the Department of Health and Human Services, there are two key actions that will be taken at this stage of the outbreak.

First, the government will intensify its efforts to protect at-risk communities by trying to get new vaccine doses faster and increasing access to testing and treatment. Officials are also working with LGBTQI+ communities to educate men who have sex with men about reducing their risk of contracting the monkeypox virus.

Second, the emergency declaration calls for all states and other jurisdictions to share data with the Centers for Disease Control and Prevention. It also authorizes the Centers for Medicare and Medicaid Services to collect data about monkeypox testing and hospitalizations. These actions will give the Department of Health and Human Services better data about where monkeypox is occurring so the agency can distribute vaccines and the antiviral medication tecovirimat (Tpoxx) to the states and cities that have the greatest need for them.

Will the declaration boost the supply of vaccines?

The Jynneos vaccine is the only monkeypox-specific vaccine currently approved by the U.S. Food and Drug Administration. Increased demand for monkeypox vaccines has used up most of the world’s existing supply of Jynneos. It will take several months for additional doses to be manufactured. These new doses are expected to be delivered between the end of 2022 and the middle of 2023.

However, the emergency declaration explains that the government may use a “new dose-sparing approach that could increase the number of doses available, up to five-fold” – an approach called fractional dosing – to make the vaccine available to more people.

The package insert for the Jynneos vaccine specifies that it should be given in two 0.5-milliliter doses four weeks apart. The emergency declaration outlines a strategy in which people are instead given two 0.1-milliliter doses. If the lower dose is as effective as the full dose, up to five times more people could be vaccinated with the same amount of vaccine.

Fractional dosing is not a new strategy. During a 2016 yellow fever epidemic in sub-Saharan Africa, clinical trials showed that a small portion of the approved vaccine dose was just as effective as a full dose at conferring immunity.

For the current monkeypox outbreak in the U.S., the National Institutes of Health will evaluate whether a smaller dose of monkeypox vaccine might be effective, as well as whether one shot provides about as much protection as two doses.

The emergency declaration does not call for schools, businesses, nursing homes or individuals to change their behaviors in any way or to prepare for any sorts of future restrictions. Declaring monkeypox a public health emergency just makes more resources available to help the government protect the public from this infectious disease.

Kathryn H. Jacobsen does not work for, consult, own shares in or receive funding from any company or organization that would benefit from this article, and has disclosed no relevant affiliations beyond their academic appointment.