Midterm election results reflect the hodgepodge of US voters, not the endorsement or repudiation of a candidate’s or party’s agenda 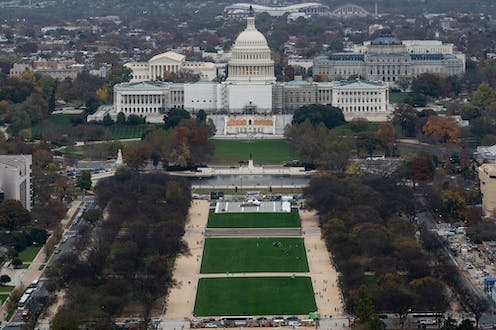 The results from the U.S. midterm elections came as a shock to many. The sitting president’s party typically suffers significant losses in House, Senate and gubernatorial races in the first midterm election of a president’s term. Several projections leading up to Election Day speculated that a “red wave” – at one point upgraded to a “red tsunami” – of massive Republican gains across the electoral board would swamp Democrats.

Yet it was clear by the end of Election Day that Democrats had performed far better than expected. The “red wave” never materialized. Republican gains in the House were meager. The Democrats maintained control of the Senate by flipping Pennsylvania and winning tight races elsewhere.

The Democrats’ success bucks a long-standing trend in U.S. politics. The president’s popularity is often taken by pollsters and analysts as a key indicator of his party’s midterm prospects. Biden’s approval rating has been low throughout his presidency. Going into Election Day, his unpopularity was comparable to that of preceding presidents who endured substantial midterm losses. Current polling shows that 57% of Americans disapprove of Biden and 70% say the country is on the wrong track. Moreover, Americans trust the GOP more than the Democrats to handle important issues such as inflation, crime and unemployment. Yet the Democrats pulled off a surprise victory – by not losing as much as expected.

As a political philosopher who researches democracy and partisanship, I can say that there’s no simple explanation of the midterms, despite the many that have already been declared, published or broadcast.

Elections are complex, and citizens are complicated. Voters embrace a range of priorities, they have different levels of information about their options and they’re motivated by different concerns.

Some data suggests that citizens have vastly different ideas about what it means to vote. Some see voting as a display of support for one’s party, others view it as the registering of one’s desires and some see their vote as expressing a judgment about the common good. It’s plausible that many citizens took themselves mainly to be voting against disliked candidates rather than for favored candidates.

So while politicians and pundits are fond of saying that elections express the “will of the people,” in reality they don’t. Taken as a collective, the electorate is too much of a hodgepodge to have a will of its own.

It goes without saying that Democrats will interpret the results as proof that their political platform is widely embraced by the American people. Meanwhile, Republicans will seek an explanation for how their message failed to reach voters.

Digging deeper, political commentators have offered several interpretations, claiming that the midterms came down to some core factor, such as abortion, immigration, the affirmation of democracy itself, the repudiation of MAGA Republicanism and elevated turnout among Gen Z voters.

These explanations have their merits. But the diversity of ideas, impulses and dispositions that voters bring to elections makes big-picture election analysis problematic.

Even when a majority claims in a poll that some specific issue is “very important,” it isn’t clear that people agree about anything beyond that description. People have different views about what makes an issue important. Similarly, two citizens who vote for the same candidate might not have much else in common. Consider that it’s likely that voters who “somewhat disapprove” of Biden may have tipped many races in the Democrats’ favor.

It’s not that democracy falls short of discerning the people’s will, but rather that there is no collective will to express. There’s only a mess of inputs, a counting procedure and a result. Consequently, the idea that the result of a large-scale election could amount to an “endorsement” or “repudiation” of a candidate’s or party’s agenda is largely a myth.

This does not mean that midterm results are meaningless. Democracy remains government of, by and for the people. Elections are instruments by which citizens have an equal say in political decision-making.

Although electoral victories cannot plausibly be regarded as an endorsement of the victor’s ideas, elections still play a crucial role in constraining and directing officeholders. In other words, elections serve simply as a popular check on government.

That still leaves the question of the meaning of the midterms. Here’s my single takeaway: As I’ve argued previously, U.S. democracy today is driven by partisan identity rather than policy. Elections thus are won not by changing the minds of undecided voters, but by mobilizing the party’s base.

Read more:
Political polarization is about feelings, not facts

Robust data shows that negative emotions like anger and resentment are reliably potent motivators of political behavior. Candidates who can stoke the anxieties of the party’s base are favored, while bridge-builders and cooperators are edged out.

These dynamics partly explain the success of MAGA candidates, aligned with former President Donald Trump, in GOP primaries.
However, the strategy of playing to the base comes with a cost in a general election, especially when voters see the party’s core as a significant threat to democracy.

In addition, hoping to placate their MAGA contingent, the mainstream GOP has declined to voice strong opposition to Trump’s election lies and appears dismissive of the House Jan. 6 committee’s work. The Republican Party itself hence is associated with MAGA extremism, and this association is a focus of non-Republican voters’ anger and indignation.

The Democrats’ midterm success likely has less to do with President Biden’s agenda and more to do with their willingness to stand up for familiar democratic values.

Robert B. Talisse does not work for, consult, own shares in or receive funding from any company or organization that would benefit from this article, and has disclosed no relevant affiliations beyond their academic appointment.