Meet _Qikiqtania_, a fossil fish with the good sense to stay in the water while others ventured onto land 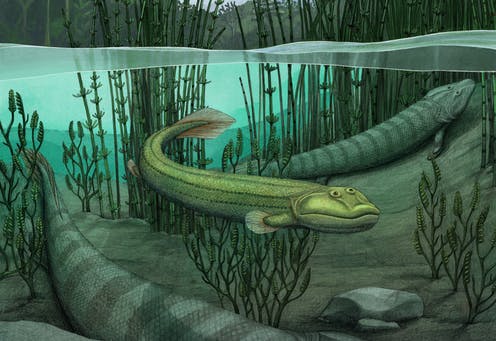 Approximately 365 million years ago, one group of fishes left the water to live on land. These animals were early tetrapods, a lineage that would radiate to include many thousands of species including amphibians, birds, lizards and mammals. Human beings are descendants of those early tetrapods, and we share the legacy of their water-to-land transition.

But what if, instead of venturing onto the shores, they had turned back? What if these animals, just at the cusp of leaving the water, had receded to live again in more open waters?

A new fossil suggests that one fish, in fact, did just that. In contrast to other closely related animals, which were using their fins to prop their bodies up on the bottom of the water and perhaps occasionally venturing out onto land, this newly discovered creature had fins that were built for swimming.

In March 2020, I was at The University of Chicago and a member of biologist Neil Shubin’s lab. I was working with Justin Lemberg, another researcher in our group, to process a fossil that was collected back in 2004 during an expedition to the Canadian Arctic.

From the surface of the rock it was embedded in, we could see fragments of the jaws, about 2 inches long (5 cm) and with pointed teeth. There were also patches of white scales with bumpy texture. The anatomy gave us subtle hints that the fossil was an early tetrapod. But we wanted to see inside the rock.

So we used a technology called CT scanning, which shoots X-rays through the specimen, to look for anything that might be hidden within, out of view. On March 13, we scanned an unassuming piece of rock that had a few scales on top and discovered it contained a complete fin buried inside. Our jaws dropped. A few days later, the lab and campus shut down, and COVID-19 sent us into lockdown.

A fin like this is extremely precious. It can give scientists clues into how early tetrapods were evolving and how they were living hundreds of millions of years ago. For example, based on the shape of certain bones in the skeleton, we can make predictions about whether an animal was swimming or walking.

Although that first scan of the fin was promising, we needed to see the skeleton in high resolution. As soon as we were allowed back on campus, a professor in the university’s department of the geophysical sciences helped us to trim down the block using a rock saw. This made the block more fin, less rock, allowing for a better scan and a closer view of the fin.

When the dust had cleared and we’d finished analyzing data on the jaws, scales and fin, we realized that this animal was a new species. Not only that, it turns out that this is one of the closest known relatives to limbed vertebrates – those creatures with fingers and toes.

We named it Qikiqtania wakei. Its genus name, pronounced “kick-kiq-tani-ahh,” refers to the Inuktitut words Qikiqtaaluk or Qikiqtani, the traditional name for the region where the fossil was found. When this fish was alive, many hundreds of millions of years ago, this was a warm environment with rivers and streams. Its species name honors the late David Wake, a scientist and mentor who inspired so many of us in the field of evolutionary and developmental biology.

Skeletons tell how an animal lived

Qikiqtania reveals a lot about a critical period in our lineage’s history. Its scales tell researchers unambiguously that it was living underwater. They show sensory canals that would have allowed the animal to detect the flow of water around its body. Its jaws tell us that it was foraging as a predator, biting and holding onto prey with a series of fangs and drawing food into its mouth by suction.

But it is Qikiqtania’s pectoral fin that is most surprising. It has a humerus bone, just as our upper arm does. But Qikiqtania’s has a very peculiar shape.

Early tetrapods, like Tiktaalik, have humeri that possess a prominent ridge on the underside and a characteristic set of bumps, where muscles attach. These bony bumps tell us that early tetrapods were living on the bottom of lakes and streams, using their fins or arms to prop themselves up, first on the ground underwater and later on land.

Qikiqtania’s humerus is different. It lacks those trademark ridges and processes. Instead, its humerus is thin and boomerang-shaped, and the rest of the fin is large and paddle-like. This fin was built for swimming.

Whereas other early tetrapods were playing at the water’s edge, learning what land had to offer, Qikiqtania was doing something different. Its humerus is truly unlike any others known. My colleagues and I think it shows that Qikiqtania had turned back from the water’s edge and evolved to live, once again, off the ground and in open water.

Evolution isn’t a march in one direction

Evolution isn’t a simple, linear process. Although it might seem like early tetrapods were trending inevitably toward life on land, Qikiqtania shows exactly the limitations of such a directional perspective. Evolution didn’t build a ladder towards humans. It’s a complex set of processes that together grow the tangled tree of life. New species form and they diversify. Branches can head off in any number of directions.

This fossil is special for so many reasons. It’s not just miraculous that this fish was preserved in rock for hundreds of millions of years before being discovered by scientists in the Arctic, on Ellesmere Island. It’s not just that it’s remarkably complete, with its full anatomy revealed by serendipity at the cusp of a global pandemic. It also provides, for the first time, a glimpse of the broader diversity and range of lifestyles of fishes at the water-to-land transition. It helps researchers see more than a ladder and understand that fascinating, tangled tree.

Discoveries depend on community

Qikiqtania was found on Inuit land, and it belongs to that community. My colleagues and I were only able to conduct this research because of the generosity and support of individuals in the hamlets of Resolute Bay and Grise Fiord, the Iviq Hunters and Trappers of Grise Fiord, and the Department of Heritage and Culture, Nunavut. To them, on behalf of our entire research team, “nakurmiik.” Thank you. Paleontological expeditions onto their land have truly changed how we understand the history of life on Earth.

COVID-19 kept many paleontologists from traveling and visiting field sites across the world these last few years. We’re eager to return, to visit with old friends and to search again. Who knows what other animals lie hidden, waiting to be discovered inside blocks of unassuming stone.

Thomas Stewart does not work for, consult, own shares in or receive funding from any company or organization that would benefit from this article, and has disclosed no relevant affiliations beyond their academic appointment.