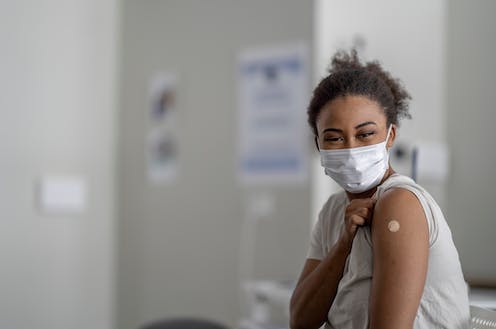 The efforts worked. As of August 2022, vaccination rates for the primary series – or required initial doses of COVID-19 vaccines – for Black and Hispanic people exceeded those of white Americans.

But boosters are a different story. Comparable booster vaccine promotion efforts have been lacking. Confusion in the public health messaging surrounding boosters and limited federal funding for rolling out vaccination campaigns have resulted in slow booster uptake across the country.

As a result, divides have once again emerged. A recent study of COVID-19 booster rates found that 45% of white adults and 52% of Asian American adults had received boosters by January 2022. But only 29% of Black adults and 31% of adults who reported another racial or ethnic identity, such as American Indian, Alaska Native, Native Hawaiian, Pacific Islander or multiracial, were boosted.

As of late August 2022, the U.S. Centers for Disease Control and Prevention reported that 36.3% of white adults in the U.S. 50 years or older and eligible for a second booster shot had received one. This is compared to only 28.4% for the Black population, 31.3% for American Indian or Alaska Native populations, and 25.1% for the Hispanic population.

New boosters aimed at the currently dominant omicron subvariant are expected to become available in early September 2022. But the benefits of this new booster will be limited if it is not widely used.

We are a team of population health researchers at Boston University and the University of Minnesota. We have been tracking COVID-19 mortality rates since the beginning of the pandemic. Our team uses demographic methods to identify social and structural factors that influence health and contribute to evidence-based reforms of public health and health care systems.

Vaccine studies suggest that adults age 50 and older who receive a booster shot have 90% lower death rates from COVID-19 than those who receive only the initial vaccine regimen. But the extent to which boosters have translated into health gains at the population level remains unclear.

Preliminary analyses by our team indicate that people in the U.S. living in counties with low booster uptake are dying from COVID-19 at higher rates than people living in counties with high booster uptake. In particular, in comparing the counties in the bottom 10% of booster rates with those in the top 10%, the COVID-19 death rates for residents of the bottom 10% of counties were 64% higher. Our analysis applies to the period from January to June 2022. It also adjusts for residents’ ages.

This difference in death rates may in part reflect the fact that counties with greater booster protection also tend to have higher rates of primary-series vaccination. Nonetheless, these findings suggest that at the population level, booster rates are now a key factor behind COVID-19 deaths.

Learning from the community

An effective booster campaign could build on lessons learned from prior vaccination campaigns. Specifically, this involves bringing vaccines directly to people. From the earliest days of vaccine distribution during the pandemic, partnerships with faith-based organizations, housing communities and trusted community organizations have been successful in reaching populations with low vaccination rates.

Other strategies to make boosters more accessible include increasing access to vaccine centers via public transit and outside of typical working hours. In rural areas, evidence-based strategies to promote vaccination include education of community ambassadors, use of social media and operation of mobile vaccination sites.

In the absence of federal funding, community efforts have aimed to make boosters more accessible. A New Yorker documentary filmed in 2021 explored the challenges that one rural community in Alabama – Panola – has faced with vaccination. It highlights community leader Dorothy Oliver as she promotes vaccination with little to no support from the government. Her efforts included door-to-door campaigns, discussions with residents about their fears and concerns and coordination of vaccination logistics, including scheduling and transport.

In a similar way, Minneapolis’ Seward Vaccine Equity Project increased booster shots among East African immigrant families by having volunteers call members of their own communities and offer them a booster appointment and a ride. The volunteers were also available to answer residents’ questions and address any concerns. Successful efforts like those could be carried out by health departments on a much wider scale.

Andrew Stokes receives funding from the Robert Wood Johnson Foundation, the W.K. Kellogg Foundation, and the National Institute on Aging.

Elizabeth Wrigley-Field is a member of the Seward Vaccine Equity Project, discussed in the article. She receives funding from the Eunice Kennedy Shriver National Institute on Child Health and Human Development via the Minnesota Population Center and from the National Institute on Aging via the Life Course Center, both at the University of Minnesota.

Dielle Lundberg and Rafeya Raquib do not work for, consult, own shares in or receive funding from any company or organisation that would benefit from this article, and have disclosed no relevant affiliations beyond their academic appointment.