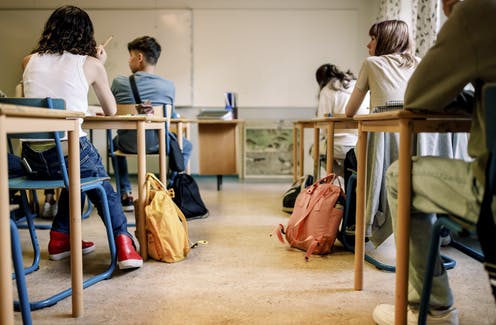 In Tennessee, a proposed law would let public school teachers refuse to call transgender students by the pronouns they use for themselves.

At Shawnee State University – a public university in Ohio – a professor got paid US$400,000 to settle a lawsuit that he filed against the school after being disciplined for refusing to refer to a trans woman student as “she” or “her.”

In Loudoun County, Virginia, a public school teacher was suspended for objecting to the use of trans students’ pronouns, but the state’s Supreme Court ordered his reinstatement while the case was pending. As in the Shawnee State professor case, the school district chose to settle. It also agreed to remove the disciplinary action from the teacher’s file.

As a researcher who focuses on the experiences of trans college students, I see all three cases as part of a disquieting trend: The right of trans students to be free from discrimination is tenuous at best and under constant legal attack.

In many ways, the legal attacks are coordinated. The Alliance Defending Freedom, a conservative Christian legal group, is behind much of the anti-trans legislation in the U.S. The organization represented the Shawnee State professor and the Virginia schoolteacher in their lawsuits. It is also backing other teachers in similar lawsuits.

For people on the sidelines, legal fights over the rights of trans students may seem like just one of several contemporary cultural battles or polarizing political debates. But for trans students, the right to be respected and recognized the way they see themselves is a matter of quality of life and – in some cases – a matter of life and death.

Research has consistently shown that trans youths have higher rates of mental health challenges – including depression, anxiety and risk of suicide – than their nontrans peers. This is because of the stress they experience as a result of prejudice and discrimination.

A 2021 survey by the Trevor Project – a nonprofit organization that conducts suicide prevention and crisis intervention for LGBTQ young people – provides additional insight. It found that if trans and nonbinary youths had been discriminated against in the past year because of their gender identity, they were twice as likely to attempt suicide as those who did not report discrimination.

The survey also indicated that the more a young person’s pronouns were not respected, the greater the suicide risk.

Thus, regardless of what state or federal law or the courts may say about whether educators must refer to students by the pronouns they use for themselves, there is strong evidence that doing so – or not – can drastically affect students’ mental health.

At the same time, many K-12 school districts, colleges and universities, states and the federal government do enable trans students to be recognized the way they see themselves.

For example, at the college level, I have found that more than 200 colleges and universities enable students to indicate their pronouns in the schools’ student information systems. This includes the state university systems in Minnesota, New York and Wisconsin. Students’ pronouns then appear on course rosters and sometimes on other administrative records. At the University of Minnesota, the policy states that university members are “expected to use the names, gender identities, and pronouns specified to them by other University members, except as legally required.”

At the state level, 19 states have guidelines for trans inclusion in K-12 public schools. These policies call for trans students to be referred to by the pronouns they use for themselves. For example, the Massachusetts policy states that “school personnel should use the student’s chosen name and pronouns appropriate to a student’s gender identity, regardless of the student’s assigned birth sex.” However, none of the policies I have seen actually spells out what will happen if a teacher or professor refuses to respect a trans person’s pronouns.

The status of trans student rights is subject to change based on which party is in the White House, controls state legislatures and appoints judges to state and federal courts.

The Alliance Defending Freedom, for instance, is seeking to challenge a Virginia law – passed after Democrats gained control of the Virginia General Assembly in 2020 – that requires state school boards to protect the rights of trans students, including allowing students to “assert a name and gender pronouns that reflect their gender identity.”

The legal status of rights for trans students is constantly changing at the federal level, as shown by how the current and previous two administrations have interpreted Title IX of the Education Amendments of 1972. This is the federal law that prohibits sex discrimination in any education program or activity that receives federal funding.

The Obama administration considered anti-trans discrimination to fall under the definition of “sex” in Title IX. For that reason, the Obama administration issued guidance in 2016 for schools to protect the rights of trans students. A central provision of this guidance was that “a school must treat students consistent with their gender identity.” This included using the pronouns that students indicate for their identity.

Then, at the start of his administration in 2021, President Joe Biden restored the previous understanding of Title IX through an executive order. It stated that trans people were covered under the prohibition of sex discrimination in Title IX and other federal laws.

A matter of equal protection

The Biden administration rooted its argument on the equal protection clause of the Constitution. It also based its position on a 2020 Supreme Court decision that involved anti-LGBT job discrimination.

That Supreme Court ruling is Bostock v. Clayton County. It held that the ban on “sex discrimination” in federal employment law – known as Title VII of the Civil Rights Act of 1964 – applied to discrimination on the basis of gender identity and sexual orientation.

The Biden administration contends that if “sex discrimination” in one federal law includes anti-LGBT discrimination, then all federal laws with similar language must be interpreted the same way. From this standpoint, discrimination against trans students, which includes not respecting how they identify their gender, is a violation of Title IX. Violations of Title IX could lead to a loss of federal funding.

Based on all the political shifts, proposed laws and lawsuits about whether educators must refer to trans students by the pronouns of their choice, it is clear the issue will be a matter of legal controversy for the foreseeable future. A key question is how much harm trans students must endure while society debates whether they have the legal right to be recognized by the pronouns they use for themselves.

Genny Beemyn does not work for, consult, own shares in or receive funding from any company or organization that would benefit from this article, and has disclosed no relevant affiliations beyond their academic appointment.