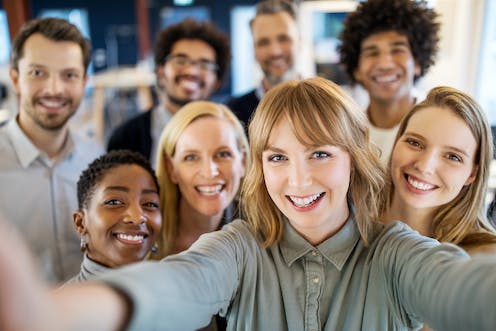 Simple computer exercises using positive words and images designed to boost self-worth can prolong the antidepressant effects of ketamine in people with depression. That’s what my research team and I found in our new study.

Over two decades ago, researchers serendipitously discovered that intravenous ketamine, a widely used anesthetic medication that has been shown to be safe when administered under medical supervision, had rapid-acting antidepressant effects when given at lower doses than is used for anesthesia.

Our study included 154 adult patients with depression. One-third received a single infusion of ketamine and returned a day later to begin four consecutive days – about 30 to 40 minutes total each day – of our novel digital exercises. That is, we showed them repeated pairings of self-related words and images – such as the letter “I” and photos of the patient – paired up repeatedly with positive cues. These include positive words like “good,” “sweet” and “lovable” as well as photos of strangers smiling.

We targeted this period of time within five days of ketamine because we expected ketamine would quickly help restore the brain’s healthy capacity to adjust and learn in response to the environment. The specific exercises we used were designed based on our prior work showing that, shortly after a ketamine infusion, thought patterns related to oneself may become less “stuck” and be more malleable, creating a window of opportunity to improve a person’s sense of self-worth.

We found that after just a single intravenous infusion of ketamine, patients experienced relief from depression symptoms for at least one month as long as they were assigned to the group that completed the digital exercises within the first five days. Compared with those in the control saline group, both of the groups that received a ketamine infusion experienced substantial relief from depression on the first day, prior to any computer training.

However, whereas the control group who went on to receive the “sham” computer training began to experience the return of depression symptoms in the subsequent 1.5 weeks or so, the group that received ketamine followed by exposure to positive conditioning continued to report decreased depression severity all the way out to the last follow-up interview, one month after ketamine.

The people who got digital training in the absence of ketamine had very little relief from their depression.

Depression is a highly prevalent and disabling condition that exacts a staggering burden on patients, families and communities.

Globally, an estimated 280 million people experience depression. There are numerous effective treatments for depression, including antidepressant medications and psychotherapy.

However, unfortunately, not all patients are helped by such treatments. And accessing them initially, as well as maintaining them over the long haul can be challenging for many patients.

The discovery of ketamine’s rapid-acting antidepressant effects opened up a brand new possibility within psychiatry to begin relieving symptoms within a day. Conventional treatments typically take six to eight weeks to reach a therapeutic effect.

However, a key question is how to keep that relief going without relying solely on repeated ketamine infusions. These can be burdensome and costly for patients and health care systems, and it is important to consider possible risks, such as the potential for drug misuse.

Our study is the first to demonstrate that the rapid effects of ketamine can be made more enduring with simple, portable and automated techniques that would be relatively easy to provide to patients in a wide range of settings.

Our initial findings suggest the positive conditioning exercises tripled – at a minimum – the duration of ketamine’s effects. But we don’t yet know how much longer the relief from depressive symptoms may have continued.

Patients in our trial will continue to complete questionnaires about their depression symptoms for an entire year following the infusion, enabling us to gain an initial understanding of just how long this benefit may endure.

Ongoing research is exploring whether similar techniques might help ease suicidality, in the hopes of providing relief in the midst of a suicidal crisis that is both immediate and enduring. Other future research may expand these techniques to additional common forms of psychological suffering, such as anxiety, disordered eating and more.

Dr. Price is the named inventor on a University of Pittsburgh–owned provisional patent filing related to the combination intervention described in this report.