Jan. 6 hearing gives primetime exposure to violent footage and dramatic evidence – the question is, to what end? 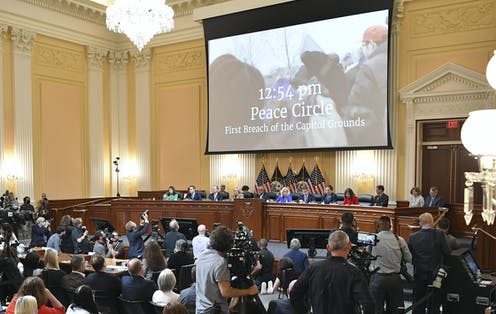 A violent mob of Trump supporters attacked the U.S. Capitol building on Jan. 6, 2021, intent on disrupting a joint session of Congress that was meeting to count electoral votes and declare Democrat Joe Biden the winner of the 2020 presidential election.

They did not succeed in preventing Biden’s certification as president, but seven people died in the attack and its immediate aftermath and around 150 police were attacked and injured.

That event did not take place in a vacuum. For months, President Donald Trump had maintained that if he lost his bid for re-election, it would be the result of fraud. His fictional claims of victory were repeatedly disproven throughout the post-election period.

The first public hearing of the House Select Committee to Investigate the January 6 Attack on the United States Capitol took place on June 9, 2022. It began the process of revealing what the committee has learned so far about the planning and carrying out of the attack on American democracy, and the role Trump played in it.

“Our work must do much more than look backwards,” said committee chairman, U.S. Rep. Bennie Thompson of Mississippi. “Because our democracy remains in danger.” We asked three scholars to watch the hearing and respond.

First, let’s be realistic about the scope of the committee’s investigation. Expert observers have said it is unlikely that it will result in criminal charges against Trump or increase Democrats’ prospects in the November midterms.

But what viewers saw is perhaps even more significant – it was history being written in real time. These hearings will inform future history textbooks, movies and novels that depict the first non-peaceful transfer of power in American history.

The first of several hearings planned in the coming weeks was theatrical and slickly produced. Former ABC News President James Goldston is advising the committee and helping to maximize viewership, producing the hearings like a mini-drama.

Speakers of the evening session, including committee vice-chair U.S. Rep. Liz Cheney, spliced their comments with violent, new footage from the Capitol attacks.

But we should not mistake theatrics for lack of substance.

Both Cheney and committee chair Bennie Thompson peppered their statements with extensive primary evidence, including video testimony from top Trump administration figures, including Ivanka Trump. This, it would appear, was to strengthen the case that the evidence being presented was nonpartisan.

“I repeatedly told the president in no uncertain terms that I did not see evidence of fraud,” Trump’s former Attorney General William Barr said in one interview.

In another exchange presented during the hearing, Greg Jacob, former counsel to Vice President Mike Pence, wrote in an email to Trump’s lawyer John Eastman: “Thanks to your bullshit, we are under siege.”

Edwards detailed how she suffered a concussion after rioters pushed a bike rack against her and she fell on a stairway. She regained consciousness, and then continued to push people back, as they “started overpowering us,” she recalled.

Edwards and another witness, documentary filmmaker Nick Quested, may not be the big names slated to testify at future hearings.

But neither appeared to have political axes to grind, and both exuded a highly valuable political commodity: likability.

The House committee faces the challenge of trying to provide the American public with truthful information about the Jan. 6 attack at a time of deep partisan division and historically low levels of public trust in government.

Confronted with that reality, the committee seems to have decided upon a smart response: Show, don’t tell.

Rather than simply telling the American public the facts, the panel’s first public hearing focused on showing what former president Donald Trump’s allies and supporters themselves have said and done. They paired that with the testimony of seemingly nonpartisan figures like Capitol police officer Caroline Edwards and documentary filmmaker Nick Quested.

It’s not clear whether these hearings will make a demonstrable difference in the public’s perception of the Jan. 6 attack. Maybe they won’t. Maybe America’s partisan divisions are too deep.

But the committee’s choice to showcase the words and deeds of others is in line with philosopher C. Thi Nguyen’s 2019 observation that “the crucial issue right now isn’t what people hear, but whom people believe.”

The committee chose to emphasize the words and actions of figures who Trump supporters and other Republicans would appear inclined to believe, such as Trump’s daughter Ivanka and his former attorney general, William Barr. Importantly, the committee chose to do so not only by reading statements into the record but by showing videos, tweets and text exchanges. The facts were purveyed directly, not interpreted by committee members.

The committee could have told the American public that the mob that stormed the capitol was violent. But they could not have conveyed the gravity of the situation the same way that Edwards did when she testified about her experience on the Jan. 6 attack.

“I was slipping in people’s blood,” she said. “I was catching people as they fell. It was carnage. It was chaos … Never in my wildest dreams did I think as a police officer, I would find myself in the middle of a battle.”

Much like the televised Watergate hearings half a century ago, the Jan. 6 committee hearings are essential.

But an avalanche of evidence against a president wasn’t enough to secure the republic then, and it isn’t now.

During the Watergate era, congressional Republicans didn’t hold the president accountable until they feared that a majority of American voters would hold them accountable for failing to do so.

None of it was enough, as long as Republicans were afraid that their primary voters would punish them if they didn’t support the president.

Once their primaries were behind them, these same politicians grew afraid that general election voters, the American majority, would punish them for continuing to give the president their support, even when his high crimes were evident.

The revelation of the “smoking gun” tape in August of 1974 was the occasion for Nixon’s resignation, not the cause.

Republicans abandoned the president then because they realized that the majority of voters were abandoning them.

What’s different in this era is that Republican political elites calculate that they don’t have to serve the majority.

Constitutional provisions designed to protect minority rights – the courts, the Senate and the Electoral College – have become the instruments of minority rule.

Even when the majority votes against them, they can control the White House, the Supreme Court, the Senate and, thanks to gerrymandering at the state level, the House of Represenatives.

That’s why the struggle to preserve the republic is a multi-front battle, being fought out not only at the federal level, but in state races and in polling places where votes are counted and certified.

Claire Leavitt has received funding from the Project on Government Oversight (POGO) and the Levin Center for Oversight and Democracy.

Ken Hughes and Mark Satta do not work for, consult, own shares in or receive funding from any company or organization that would benefit from this article, and have disclosed no relevant affiliations beyond their academic appointment.