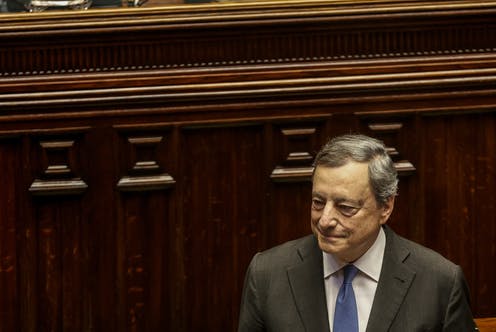 Italian Prime Minister Mario Draghi resigned for a second time in a week on July 21, 2022, after his earlier attempt to step down was rejected by the country’s president.

_This time, President Sergio Mattarella responded by dissolving parliament. A new election is set for late September. In the meantime, Mattarella asked Draghi to carry on as caretaker leader. His resignation comes a day after Draghi won a vote of confidence in parliament, but in a way that signaled that the broad ruling coalition was fractured beyond repair.

It’s a lot to unpack. So The Conversation called on Carol Mershon, an expert on Italian politics at University of Virginia, to explain the situation and what may come next.

What is going on in Italian politics?

It’s been an interesting few days. Mario Draghi, who was not elected to Parliament but was invited to form a government in February 2021 by the president, resigned twice. Draghi has been serving as a nonpartisan prime minister leading a broad coalition of parties that made up a unity government. But that coalition has crumbled. First, members of the populist 5-Star Movement refused to vote on a government bill over concerns that cost of living relief measures were insufficient, prompting Draghi’s first resignation.

That led to a vote of confidence on July 20. Draghi won the ballot in the Senate with 95 votes in favor and 38 against. But it was by no means a ringing endorsement. The Senate has 315 seats – which means that many lawmakers opted to vote “present not voting, “abstain,” or were just absent for the vote. Thus, Draghi resigned again.

Why did Draghi step down if he won the confidence vote?

Although Draghi technically survived the confidence vote, it was not the sort of result he needed to stay on as prime minister. In addition to 5-Star, other members of the ruling coalition, including the rightist parties Forza Italia and League, were in dissent.

Draghi has long emphasized that as a nonparty leader, he needs the support of a broad coalition, especially at a time when the country is facing serious economic and social challenges. He leads a unity government – and without unity among the parties, it would be hard for him to govern.

Both the withdrawal of backing by parties and the fracturing of the parties themselves, with some members of parliament leaving coalition partners, suggest that the coalition is now past the point of being able to operate in unity.

How many parties are in the coalition? Do they broadly share the same politics?

As with much in Italian politics, that isn’t a straightforward question to answer. When the Draghi government was launched in February 2021, it had cabinet ministers from six parties – the populist 5-Star Movement, the right-wing League and Forza Italia, Democrats and its splinter party, Italy Alive, and finally the progressive Article One. But six became seven when former 5-Star members created another party, Together for the Future. Then, if you count junior ministers in the coalition, three more parties were included.

Now you have more splintering of parties and departures of members as politicians maneuver for advantage with an election on the horizon, making it even more difficult to say just how many parties are in the coalition.

Coalition governments are not uncommon in Italy; in fact, they are the norm. But the one under Draghi was particularly broad, going from progressive parties to far right groups.

Why so many parties? And why coalitions?

Italy has a fragmented party system. I have done research that shows the average number of parties represented in Italy’s parliament between 1946 and 1992 was 12 – more than most democracies. Since then, the country has gone through a series of electoral reforms, but the multiparty system has stayed in place.

There are three factors behind Italy’s fragmented parliament. First, Italian post-World War II elections have always had a strong component of proportional representation – that is to say, the number of seats each party has is proportional to the number of votes it receives. So in Italy, a party that gets 5% of the national vote can reasonably expect to get 5% of the seats. Compare that to the U.K. system, in which a party that gets 5% of the national votes would likely get zero seats.

Under Italy’s proportional representation laws, a party cannot manufacture a majority of parliamentary seats out of a plurality of votes. And with so many parties, it is very unlikely that any one party can muster up a majority outright. So instead, the largest non-majority party must find alliances to form a coalition government.

Second, electoral law reforms of 1993 created an incentive for Italian politicians to form or found new parties. After those reforms and the disintegration of the once-dominant Christian Democratic Party – which until that point had been the largest party in every post-war Italian government – political entrepreneurs found they could get noticed more by forming new parties, or splintering off from existing parties. We are seeing some of this now with high-profile departures from 5-Star. It tends to happen when politicians are looking to position themselves for the next election.

Third, the creation of new parties was also encouraged by the breakdown of traditional politics in Italy. It used to be the case that what voters cared about was where a party stood on two areas: left-right politics, and whether they were secular or religious.

That has changed. Now, voters are motivated by not only left-right politics but also a range of factors, such as whether a party is pro- or anti-European Union, or whether it is tolerant of immigration or is anti-immigration. So you get parties like 5-Star that are anti-immigrant and anti-EU, but don’t fit so neatly on the left-right political axis.

Are coalitions prone to failure?

Not necessarily. Italy has experienced a number of relatively stable coalitions. Romano Prodi’s coalition government lasted from 1996 to late 1998. It faced a lot of problems during that period, but Prodi managed to keep that coalition going. And back in the 1980s, the coalition put together by socialist Benedetto Craxi lasted four years. Craxi’s coalition faced a brief hiccup – it fell apart, then was quickly reconstructed – but was composed of the same parties.

And if you scan the European horizon, coalitions are a fairly common form of government. A coalition is the norm in Germany, and they are fairly common in Scandinavian countries as Norway. And they are often long-lived.

I don’t think coalitions are inherently unstable. Draghi is a relatively popular figure, but his coalition faced a host of challenges ranging from economic problems and Italy’s response to the pandemic, to an immigration crisis that will not go away. The tipping point was a fight over the government’s response to a cost of living crisis – 5-Star had been pushing Draghi to do more to support hard-pressed Italians. And Draghi has said he won’t govern without the support of 5-Star, the largest party in Italy’s parliament when parliamentary elections were last held in 2018.

So what happens next?

Elections are now expected in late September. Until then, it looks like Draghi will continue as prime minister in a caretaker capacity. In the meantime, it is likely that there will be some more splintering within the parties represented in parliament as politicians maneuver for electoral advantage. Yet politicians at this point also have to consider the risk of seeming irresponsible and fickle, with the parliamentary election sure to occur quite soon.

Carol Mershon does not work for, consult, own shares in or receive funding from any company or organization that would benefit from this article, and has disclosed no relevant affiliations beyond their academic appointment.