Is the COP27 ‘loss and damage’ fund for developing countries a breakthrough or an empty climate promise? 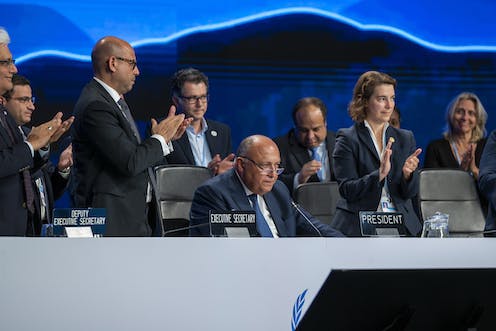 Developing nations were justifiably jubilant at the close of COP27 as negotiators from wealthy countries around the world agreed for the first time to establish a dedicated “loss and damage” fund for vulnerable countries harmed by climate change.

It was an important and hard fought acknowledgment of the damage – and of who bears at least some responsibility for the cost.

But the fund might not materialize in the way that developing countries hope.

I study global environmental policy and have been following climate negotiations from their inception at the 1992 Rio Earth Summit. Here’s what’s in the agreement reached at COP27, the United Nations climate talks in Egypt in November 2022, and why it holds much promise but very few commitments.

All decisions at these U.N. climate conferences – always – are promissory notes. And the legacy of climate negotiations is one of promises not kept.

This promise, welcome as it is, is particularly vague and unconvincing, even by U.N. standards.

Essentially, the agreement only begins the process of establishing a fund. The implementable decision is to set up a “transitional committee,” which is tasked with making recommendations for the world to consider at the 2023 climate conference, COP28, in Dubai.

Importantly for wealthy countries, the text avoids terms like “liability” and “compensation.” Those had been red lines for the United States. The most important operational questions were also left to 2023. Three, in particular, are likely to hound the next COP.

1) Who will pay into this new fund?

Developed countries have made it very clear that the fund will be voluntary and should not be restricted only to developed country contributions. Given that the much-trumpeted US$100 billion a year that wealthy nations promised in 2015 to provide for developing nations has not yet materialized, believing that rich countries will be pouring their heart into this new venture seems to be yet another triumph of hope over experience.

2) The fund will be new, but will it be additional?

It is not at all clear if money in the fund will be “new” money or simply aid already committed for other issues and shifted to the fund. In fact, the COP27 language could easily be read as favoring arrangements that “complement and include” existing sources rather than new and additional financing.

3) Who would receive support from the fund?

As climate disasters increase all over the world, we could tragically get into disasters competing with disasters – is my drought more urgent than your flood? – unless explicit principles of climate justice and the polluter pays principle are clearly established.

Acknowledgment that countries whose excessive emissions have been causing climate change have a responsibility to pay for damages imposed on poorer nations has been a perennial demand of developing countries in climate negotiations. In fact, a paragraph on “loss and damage” was also included in the 2015 Paris Agreement signed at COP21.

What COP27 at Sharm el-Sheikh, Egypt, has done is to ensure that the idea of loss and damage will be a central feature of all future climate negotiations. That is big.

Seasoned observers left Sharm el-Sheikh wondering how developing countries were able to push the loss and damage agenda so successfully at COP27 when it has been so firmly resisted by large emitter countries like the United States for so long.

The logic of climate justice has always been impeccable: The countries that have contributed most to creating the problem are a near mirror opposite of those who face the most imminent risk of climatic loss and damage. So, what changed?

At least three things made COP27 the perfect time for this issue to ripen.

First, an unrelenting series of climate disasters have erased all doubts that we are now firmly in what I have been calling the “age of adaptation.” Climate impacts are no longer just a threat for tomorrow; they are a reality to be dealt with today.

Second, the devastating floods this summer that inundated a third of my home country of Pakistan provided the world with an immediate and extremely visual sense of what climate impacts can look like, particularly for the most vulnerable people. They affected 33 million people are expected to cost over $16 billion.

The floods, in addition to a spate of other recent climate calamities, provided developing countries – which happened to be represented at COP27 by an energized Pakistan as the chair of the “G-77 plus China,” a coalition of more than 170 developing countries – with the motivation and the authority to push a loss and damage agenda more vigorously than ever before.

Finally, it is possible that COP-fatigue also played a role. Industrialized countries – particularly the U.S. and members of the European Union, which have traditionally blocked discussions of loss and damage – remain distracted by Russia’s war in Ukraine and the economic effects of the COVID-19 pandemic and seemed to show less immediate resistance than in the past.

Importantly, for now, developing countries got what they wanted: a fund for loss and damage. And developed countries were able to avoid what they have always been unwilling to give: any concrete funding commitments or any acknowledgment of responsibility for reparations.

Both can go home and declare victory. But not for long.

Is it just a ‘placebo fund’?

Real as the jubilation is for developing countries, it is also tempered. And rightly so.

For developing countries, there is a real danger that this turns out to be another “placebo fund,” to use Oxford University researcher Benito Müller’s term – an agreed-to funding arrangement without any agreed-to funding commitments.

In 2001, for example, developing countries had been delighted when three funds were established: a climate fund to support least developed countries, a Special Climate Change Fund, and an Adaptation Fund. None ever reached the promised scale.

Writing prior to COP15 in Copenhagen in 2009, Müller boldly declared that developing countries would never again “settle for more ‘placebo funds’.” I very much hopes he has not been proven wrong at Sharm el-Sheikh.

Adil Najam does not work for, consult, own shares in or receive funding from any company or organization that would benefit from this article, and has disclosed no relevant affiliations beyond their academic appointment.