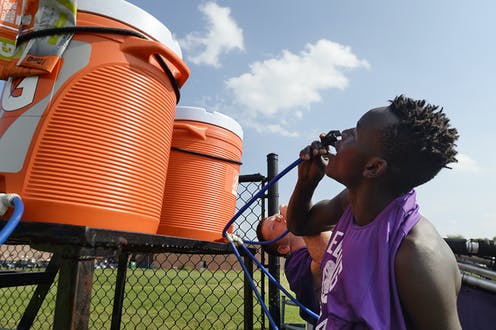 As temperatures rise, heat illnesses are becoming an increasing risk for athletes, particularly in the first few weeks of practice. We asked Susan Yeargin, a co-author of the National Athletic Trainers Association’s position statement on heat illness, to explain the risks and what coaches and players need to remember to keep kids safe.

Why are athletes particularly vulnerable to heat during the first few weeks of training?

When an athlete of any age begins to exercise or train for a sport in hot conditions, the body needs time to adapt. In a natural outdoor environment, this is called heat acclimatization.

In the first three days of heat exposure, the body hasn’t started to adapt, which is why those are the riskiest days for heat illness. Most acclimatization happens by the 10th day, but it takes about two weeks for the body to reach its peak heat acclimatization.

The most important change within the body is plasma volume expansion, giving the body more blood to help dissipate heat and supply exercising muscles. In short, it allows the cardiovascular system to work more efficiently.

The rate of sweating also increases, allowing more heat to dissipate from the body. The body increases its retention of salt, which is good because it allows for better electrolyte balance within the body to maintain hydration and keep muscles working optimally. The heart rate decreases, so there is less strain on the cardiovascular system. And the core body temperature decreases, representing a lower risk for exertional heat stroke.

But even with all of these adaptations, the body isn’t fully protected from heat illness, which is why other prevention strategies are needed.

Also, just because athletes have been training over the summer doesn’t mean they are fully adapted to heat under the conditions that a sport season imposes. The sports season brings new exercise intensity, often higher heat than earlier in the summer, and heavier equipment, like pads and helmets, and an increased pressure to perform.

At what point do temperatures start getting dangerous for young athletes?

That varies across the country. Athletes who live in milder climates should not be practicing in environmental conditions over 86.2 degrees Fahrenheit (30.1 degrees Celsius), based on wet bulb globe temperature. For those in traditionally hotter climates, like Texas, the recommended cutoff temperature for canceling practice is 92 F (32.2 C).

The risk is about more than the temperature – it’s also about humidity, sun and wind. Humidity hinders sweat evaporation, the body’s primary heat dissipation mechanism. So when humidity is high, no matter the air temperature, that creates a heat safety concern.

Athletic trainers often use wet bulb globe temperature – which takes all four of those variables into account – to determine when teams should shorten or cancel practice and how often rest and cooling breaks should be required. It’s a better gauge of risk than the heat index, which uses only air temperature and humidity.

How can you tell when someone is suffering from heat illness?

There are several conditions that fall within the realm of “heat illnesses,” but these are the primary ones:

What do athletic trainers recommend for keeping athletes safe in the heat, particularly in those first weeks?

Teams should follow heat acclimatization guidance to gradually increase the length of training sessions and the intensity of workouts. For example, an expert group that reviewed research on youth sports recommended always keeping training or practice sessions under two hours and only once a day in the first week. Conditioning, such as repetitive running and timed drills, should be held in an air-conditioned area or not integrated for the first two weeks.

In addition, teams should pay attention to wet bulb globe temperature tables for their part of the country and avoid exercising in the hottest part of the day, generally 10 a.m. to 6 p.m.

The National Athletic Trainers Association also recommends: using “weight charts” to help players understand how much they need to drink to stay hydrated; having on-site athletic trainers with treatment resources, such as cold-water tubs; encouraging good sleep and nutrition; and providing a safe work-to-rest ratio during conditioning and practice sessions. Breaks should be in the shade, ideally with cooling devices such as fans, misters and cold towels. If a hard or intense drill is completed, players should have an equally long break.

A buddy system is also beneficial. With a buddy, someone is more likely to notice when an athlete isn’t feeling well or is starting to act out of character and needs to be stopped for evaluation.

Susan Yeargin is affiliated with Korey Stringer Institute Medical and Science Advisory Board and the NATA Foundation Research and Pronouncements Committees.