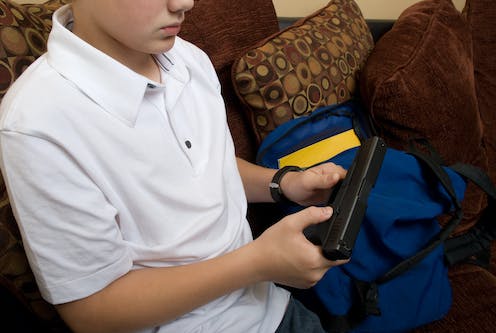 School shootings in the U.S. are national tragedies, and the toll they take in lives cut short and traumatized distinguishes the U.S. from other high-income countries. But there is another way that guns are killing American children, and in far greater numbers: suicide.

Between 2011 and 2020, the most recent decade for which data is available, 14,763 children ages 5-17 died by suicide in the U.S. – a rate of approximately four deaths every day. Over 40% of these suicides involved a firearm. The great majority of guns involved in youth suicides come from the victim’s home or the home of a relative.

As scholars who have studied firearm violence and suicide prevention, we know the exceptionally high rate of gun suicides by U.S. youths is directly linked to the easy access many young people have to guns in and around the home.

Although suicides affect all racial and ethnic groups in America, the suicide rate is highest among Native communities, while recent increases have disproportionately hit Asian/Pacific Islanders and Black communities.

Studies show that the risk of death by suicide is over four times higher in households with firearms. Consistent with this elevated risk in gun-owning households, studies that compare rates of suicide in different cities and across the 50 states show that in places where there are more guns there are more overall suicide deaths due to there being more firearm suicides.

The suicide risk associated with the presence of firearms in homes with children can be reduced, though not eliminated, by storing firearms locked, unloaded and separate from ammunition.

Today, approximately 40% of U.S. households with children contain firearms. This means that around 30 million children under the age of 18 currently live in a home with at least one firearm, of whom roughly 5 million live in homes where at least one firearm is both loaded and unlocked.

A recent simulation study estimated that approximately 100 suicides a year among youths ages 5 to 19 could be prevented if the proportion of unlocked firearms in households with children decreased from 50%, as is approximately the case today, to 40%.

Research also suggests that when clinicians provide counseling to parents that emphasizes the importance of making guns inaccessible to their children, a substantial minority of parents improve storage by locking previously unloaded guns, especially when the counseling is supplemented with free firearm storage devices.

For youths at particularly high risk of suicide who are seen in the emergency department for a mental or behavioral health crisis, training clinicians to counsel parents to reduce access to firearms – often referred to as “lethal means counseling” – can result in a substantial increase in the proportion of parents spoken to about firearm risk in the emergency department and, critically, in the proportion of parents who lock previously unloaded guns after returning home.

Storing guns unloaded and locked up does not necessarily, or in itself, prevent children’s access to firearms.

The evidence that a firearm in a child’s home substantially increases that child’s risk of death by suicide is overwhelming. Locking and unloading all household firearms and storing firearms separately from ammunition substantially mitigates, but does not eliminate, this risk.

In a recent nationally representative study of parents and their adolescent children, all of whom lived in a home with firearms, more than one-third of adolescents reported being able to independently access a loaded household firearm in less than 5 minutes – and 50% within an hour. Although this proportion was lower in homes where parents locked away all their guns, even here one-quarter of children said they were able to access and fire a loaded gun within 5 minutes.

Meanwhile, 3 in 10 parents acknowledged that their child could independently access a household firearm, suggesting that many either do not fully appreciate the risk access to firearms confers or do not believe that the risk pertains to their children. Moreover, nearly 1 in 4 children whose parents indicated that their child could not independently access a household gun reported being able to access and fire a gun in their home within 5 minutes.

We believe that rigorously evaluating how to effectively communicate the importance of making household firearms inaccessible to children is an urgently needed next step if we are to prevent the loss of so many young lives year after year to suicide.

Matthew Miller receives funding from the Joyce Foundation, the National Collaborative of Gun Violence Research, The National Institutes of Health, and the American Foundation for Suicide Prevention.

Deborah Azrael receives funding from the Joyce Foundation, the National Collaborative of Gun Violence Research, and the American Foundation for Suicide Prevention.