Helping Afghanistan after earthquake will be hard: 3 questions answered 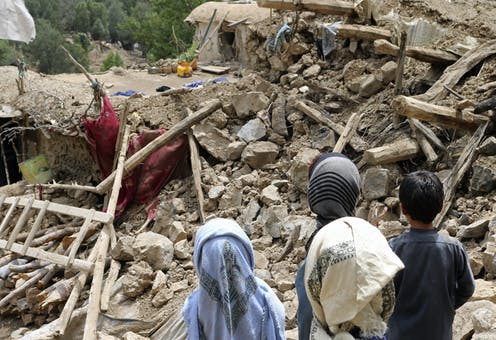 Afghanistan’s deadliest earthquake in more than two decades took place on June 22, 2022, killing more than 1,000 people and injuring at least 1,600. The disaster struck a remote mountainous region and came at a time when millions of Afghans are experiencing severe poverty and hunger. Since the Taliban, which enforces strict Islamic laws, took over the government in 2021, other countries, humanitarian organizations and independent aid agencies have been reluctant to provide any assistance to the government because no country has officially recognized it.

But the Taliban’s supreme leader, Haibatullah Akhundzadah, has called for “the international community and all humanitarian organizations to help the Afghan people affected by this great tragedy and to spare no effort to help the affected people.” Within hours of the earthquake, the United Nations Office for the Coordination of Humanitarian Affairs said that it was dispatching aid, including medical supplies, food and tents, in addition to teams of surgeons and other medical professionals. The World Food Program, which says it has provided aid to 18 million people in Afghanistan in the first half of 2022, was sending food as well.

We asked Mohammad Qadam Shah, an assistant professor of global development at Seattle Pacific University who has researched aid in Afghanistan, how he expects the world to respond.

1. Why is it hard to respond to disasters in Afghanistan?

As with the previous U.S.-backed government, Taliban leaders have a centralized, top-down aid management system. Under this system, they are the sole decision-makers who determine how aid is allocated.

It is also rife with corruption and lacks accountability. As a result, there’s no way to guarantee that any money given for a specific purpose goes where it’s supposed to.

That makes the earthquake a test of the Taliban’s capacity to govern, respond to Afghans’ immediate needs and effectively administer aid. From the international community’s perspective, the question is: Can the Taliban be trusted to distribute any money they provide fairly?

Many observers fear the answer is no.

But Afghanistan’s system of distributing aid wasn’t working before the Taliban took over in 2021. Given the lack of legitimacy, the previous Afghan government consistently used aid to purchase political capital. Instead of basing it on the needs and preferences of Afghans, the central government doled out political favors and focused on their connections and clout.

That is, even if aid is handled the way the previous government dealt with it during the previous two decades, the money would still be wasted.

What makes the Taliban’s ability to respond to disasters even worse is that most donors have cut off or scaled back aid to Afghanistan – partly because it is oppressing women, denying girls over 12 the right to an education and violating human rights.

And international support for economic development has stopped because the rest of the world does not trust the current government.

If money does arrive to assist with relief efforts tied to the earthquake, I believe there’s no guarantee it wouldn’t be used for terrorist activities.

2. What does Afghanistan need?

Even before the earthquake, Afghanistan was experiencing such widespread poverty and dire food insecurity that 70% of its households couldn’t afford to feed their families and pay for other basic needs, according to a World Bank survey. An estimated 1.1 million children are at risk of experiencing the most severe form of malnutrition, according to UNICEF, the U.N. children’s fund. The country is enduring massive political and economic instability, with inflation running at 12.7% and economic activity contracting by more than one-third.

Following the earthquake, the needs now include emergency medical care and shelter for the thousands of survivors whose villages in a remote and mountainous province were reduced to rubble. The U.N. and its World Food Program should deliver humanitarian aid to deal with the earthquake’s aftermath and widespread hunger directly, rather than providing the Taliban with money.

The small amount of aid that is still getting through – mostly food like rice, cooking oil, flour and beans – is meeting very basic needs to help people survive.

But in my view, what Afghanistan really needs to thrive in the long term is a path to becoming self-sufficient.

3. What other challenges could delay aid to Afghanistan?

The World Food Program and the handful of other aid agencies that either remained in Afghanistan or have returned face other challenges, especially staffing.

Most foreign aid workers have left by now. Many Afghan nationals previously employed by international organizations and agencies have departed too.

The U.N., however, reestablished a foothold in Afghanistan in 2022. It is appealing to donor nations to fund its multibillion-dollar operations there. And the World Bank announced on June 3, 2022, US$793 million in funding to increase access to food and medical care. They will “be implemented off-budget out of the interim Taliban administration’s control, through United Nations agencies and nongovernmental organizations,” the bank said.

Mohammad Qadam Shah does not work for, consult, own shares in or receive funding from any company or organization that would benefit from this article, and has disclosed no relevant affiliations beyond their academic appointment.