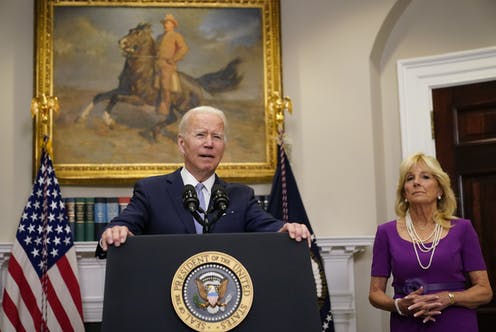 Gun control legislation almost never passes Congress, even when there is widespread public support for action in the wake of mass shootings such as those in Buffalo and Uvalde.

That’s why we did not expect that on June 25, 2022, President Joe Biden would sign into law a bill containing a set of gun reform provisions known as the “Bipartisan Safer Communities Act.”

Based on our expertise studying public opinion and the U.S. Congress, here are four reasons we believe some gun control measures got enacted this time around.

Public opinion is fickle. What concerns people on a given day may not concern them soon after, especially if the news cycle loses sight of it.

In this case, the issue of gun control did not fade from the public agenda after the Buffalo and Uvalde shootings in May. It rose in importance. While just after the shootings gun control was not at the top of the public’s congressional to-do list, by mid-June it was, rivaling the economy – 48% to 51%, respectively – as a top priority. In addition, public support for stricter gun control laws continued to climb in the intervening period.

What happened to increase the public’s support and demand for gun control? One of many factors is that Texas Sen. John Cornyn, a Republican and staunch Second Amendment supporter, came out publicly and declared, “I’m interested in what we can do to make the tragic events that occurred less likely in the future.” Within a week of the Uvalde shooting, he and Sen. Chris Murphy, a Connecticut Democrat, announced they would start meeting to discuss potential gun legislation. The actual possibility of reform kept the issue on the media’s, and thereby the public’s, agenda.

Media and public attention were also stoked by an impassioned public plea from Uvalde native and Hollywood star Matthew McConaughey at the White House, which went viral on social media. Additionally, emotional testimonies in a U.S. House committee hearing provided graphic details of the horrific experiences of students, teachers and parents.

The new law enhances background checks for gun buyers between ages 18 and 21, provides money for states that enact “red flag” laws that allow a judge to take away the someone’s gun if they’re deemed dangerous to themselves or others, provides funding for mental health and school safety, and closes the so-called “boyfriend loophole,” which allows abusive boyfriends and even stalkers to have access to guns. How did these provisions get past Republican filibusters, which have stymied other gun reform bills?

One key factor is that provisions like these receive widespread support from both Democrats and Republicans.

Reports indicate that Cornyn, the lead Republican negotiator in the Senate, presented internal poll numbers showing broad support for these specific provisions among gun owners to his fellow Senate Republicans during deliberations. This reassurance of support from their base likely helped sway the 15 Republican senators who ended up voting for the bill. In the end, these 15 Republican votes were crucial to creating a filibuster-proof majority – at least 60 senators – in support of the bill.

While the legislation certainly is an accomplishment, it is a far cry from what large majorities of the public actually want, including most Republican voters. In the most recent Morning Consult/Politico poll, the public expressed strong majority support for aspects of legislation that were rejected in these negotiations. The mid-June poll shows 89% support universal background checks; 81% support a mandatory three-day waiting period; 80% support selling assault weapons only to those age 21 or older and 79% support raising the minimum age for any gun purchase to 21.

Contrary to expectations, the Republican Senate minority leader, Mitch McConnell, gave a green light to the bipartisan efforts for gun control. This was evident when he appointed Cornyn to serve as the GOP’s lead negotiator.

McConnell’s support for passing a bill favored by Democrats represents an about-face. During Obama’s presidency, McConnell discouraged GOP senators from supporting Democratic proposals because it would make the ruling Democrats look reasonable and effective.

Why the flip? This time around McConnell seems to be betting that it is his party that needs to look reasonable heading into the 2022 midterm elections. Republicans only need to gain a total of one more seat to make McConnell the Senate majority leader once again. Close races are taking place in “purple” states such as Georgia, Arizona, Nevada and Pennsylvania. The path to victory in these states goes through moderate suburban voters, who are supporters of gun reform.

A bipartisan gun reform bill may help inoculate the Republican Party and its candidates from Democratic charges of extremism and lack of concern for the safety of American schoolchildren. This thought appeared to be on McConnell’s mind when he said shortly before the bill’s passage: “I hope it will be viewed favorably by voters in the suburbs we need to regain in order to hopefully be in the majority next year.”

Not only does the new law provide cover for prospective Republican candidates in purple states, but it also required few red state Republicans to cast a vote that would put them in electoral danger.

Of the 15 Republican senators who voted for the bill, only two are up for reelection this year: Lisa Murkowski from Alaska, who does not have to run in a closed Republican primary, and Tod Young of Indiana, who had already won his Republican primary by the time of the vote. Another four of the 15 GOP Senate supporters are retiring and won’t have to face voters: Roy Blunt, Richard Burr, Rob Portman and Pat Toomey.

Democrats, specifically Senate Majority Leader Charles Schumer, appear to have also been rethinking their electoral strategy when it comes to gun control.

In the past, Democrats have often reflexively rejected gun reform proposals put forward by Republicans as insufficient half-measures – even going so far as to vote against them. In turn, Democrats offer up gun control measures they know in advance have no chance of passing, because Republicans staunchly oppose them and will have to go on record as doing so.

Republicans charge that Democrats would prefer to have gun control remain as a political issue to embarrass them rather than to engage in sincere compromise to get something done.

After Buffalo and Uvalde, Schumer faced the familiar pressure from progressives not to settle for what they saw as watered-down solutions to gun violence. Schumer could have once again forced Republicans to vote against universal background checks or an assault weapons ban.

But the context was somewhat different than in 2016.

For over a year, Senate Democrats have been unable to pass any version of President Biden’s signature Build Back Better plan, or much of any notable legislation at all. The party’s need for some sort of policy win could well have weighed more than taking a principled stance and fighting for a more comprehensive, but legislatively doomed, bill.

Schumer’s decision to allow his lead negotiator, Sen. Chris Murphy, to abandon some long-held Democratic priorities in order to compromise with Republicans may have been crucial to the U.S. Congress finally getting a gun reform bill enacted after decades of frustration.