First bipartisan gun control bill in a generation signed into law: 3 essential reads on what it means 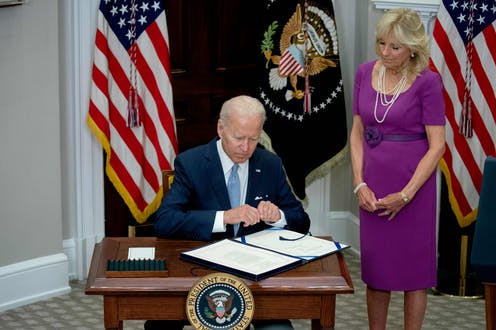 President Joe Biden signed into law on June 25, 2022, a bipartisan bill that is the first significant change in federal gun legislation in nearly three decades.

Known as the Bipartisan Safer Communities Act, the bill was written in response to the shootings in Buffalo, New York, and Uvalde, Texas, and sped through a usually slow-moving Congress.

Though the bill’s limited scope has left many disappointed, it does tighten up gun control in a number of key areas.

As the bill was making its way through Congress, The Conversation published a number of articles looking at its provisions and how effective they might be in addressing America’s gun violence crisis.

Among the elements of the new law is support for states to pass what are called “red flag laws.”

LaGrange College political science professor John A. Tures writes that these laws allow police to take guns from people deemed a threat to themselves or others and bar them buying firearms.

To determine if red flag laws reduce gun deaths overall, Tures examined states’ firearm death rates, in light of whether they had a red flag law or not, in each of three years – 2018, 2019 and 2020.

“In 2020, if there were no red flag laws, I estimate that 52,530 Americans would have died in gun deaths. The number actually recorded was 45,222, indicating red flag laws saved 7,308 American lives that year,” Tures writes.

2. What is the ‘boyfriend loophole’?

One of the sticking points in negotiations over the bill that was eventually resolved was the “boyfriend loophole.”

Under current federal legislation, Michigan State University criminal justice professor April M. Zeoli explains intimate partner relationships are defined only as those in which two people are or were married, live or lived together as a couple, or have a child together.

People who were in a dating relationship are largely excluded from this definition.

As a result, Zeoli writes, “dating partners are exempt from federal laws that prohibit those convicted of domestic violence misdemeanor crimes, or those who are under domestic violence restraining orders, from buying or possessing a firearm.”

This is what is referred to as the “boyfriend loophole.”

Research suggests that when a violent male partner has access to a gun, the risk of murder to the female partner increases fivefold.

With Biden signing the bill into law, the wording extends the ban to “those who have or have had a continuing relationship of a romantic or intimate nature.”

Though the bill will close the loophole for those convicted of domestic violence misdemeanor crimes, it does not cover restraining order laws.

Read more:
Will closing the ‘boyfriend loophole' in gun legislation save lives? Here's what the research says

3. Does the law protect schools?

The new law would provide US$1 billion to help schools put in place comprehensive strategies to create safe and healthy learning environments, including $300 million to increase access to mental health services.

In the years since the Columbine shooting in 1999, researchers and federal law enforcement agencies have studied school shootings and developed risk assessments to gauge the likelihood of actual violence by a young person identified as a possible risk.

As Paul Boxer, a Rutgers University – Newark psychology professor, explains, the assessments are conducted by professionals that include police officers, teachers and mental health counselors.

Together, they determine a young person’s risk for violence.

“These teams may not be able to prevent every possible incident,” Boxer cautions. “Still, this sort of approach is critical to improving the process of identifying and stopping potential shooters overall.”