Fierce heat wave is building in the US West: Extreme heat + air pollution can be deadly, with the health risk together worse than either alone 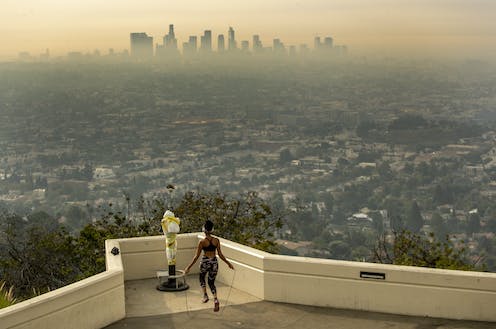 On the morning news, you see the weather forecast is for high heat, and there is an “excessive heat watch” for later in the week. You were hoping the weather would cool down, but yet another heat wave is threatening human health and increasing the chance of wildfires. On top of these warm days and nights, air quality data has been showing unhealthy levels of pollution.

Sound familiar? This scenario is increasingly the new normal in many parts of the world.

In the U.S. West, several states were under heat advisories going into September, facing what the National Weather Service described as a “prolonged and possibly record heat wave” – including in areas contending with wildfire smoke.

High heat and air pollution are each problematic for human health, particularly for vulnerable populations such as older adults. But what happens when they hit at the same time?

We examined over 1.5 million deaths from 2014 to 2020 registered in California – a state prone to summer heat waves and air pollution from wildfires – to find out.

Deaths spike when both risks are high

The number of deaths rose both on hot days and on days with high levels of fine particulate air pollution, known as PM2.5. But on days when an area was hit with a double whammy of both high heat and high air pollution, the effects were much higher than for each condition alone.

The risk of death on those extra-hot and polluted days was about three times greater than the effect of either high heat or high air pollution alone.

Why risks are higher when both hit at once

There are several ways the combined exposure to extreme heat and particulate air pollution can harm human health.

Oxidative stress is the most common biological pathway linked with particulate air pollution and heat exposure. Oxidative stress is an imbalance between production of highly reactive molecules known as reactive oxygen species, or ROS, and the body’s ability to remove them. It’s been linked with lung diseases, among other illnesses.

Older adults may be more susceptible to effects of extreme heat and air pollution exposure, in part because this stress comes on top of age-related chronic health conditions like heart disease, high blood pressure, diabetes or chronic lung disease. Impaired body temperature regulation in response to heat can also occur with aging. And older adults may be less mobile and therefore less able to get to cooling centers or to medical care and be less able to afford air conditioning.

A future of high temperatures and air pollution

This isn’t just a California problem. Climate change will increase exposure to high heat and air pollution in many parts of the country.

Yearly average temperatures in the U.S. are already more than 1.8 degrees Fahrenheit (1 degree Celsius) warmer than at the beginning of the 1900s. By the end of this century, global temperatures are on pace to be nearly 5 F (2.7 C) warmer. Dangerous extreme heat waves, currently rare, will become more common.

Changing climate is also affecting levels of outdoor fine particulate pollution – for example, through weather changes such as air stagnation events, wind and dust storms, and drier and warmer conditions that contribute to increasingly frequent and intense wildfires.

What to do to stay safe

Further research is needed to better understand these effects, such as the full impact of wildfire smoke exposure. However, enough is known that people should take measures to reduce their risk of harm during periods of extreme heat or air pollution.

That means staying well hydrated and keeping cool. Shopping malls and other air-conditioned public spaces can provide a refuge from heat. Home air conditioning, especially during nighttime, can reduce mortality. A portable air filter in the bedroom can markedly reduce particle pollution levels.

People with symptoms of heat stress, such as headache, nausea, dizziness or confusion, especially the elderly, should seek medical care.

Many county and state health departments already provide alerts about extreme heat and extreme air pollution. Developing a special category of alert during co-occurring extremes may be beneficial to public health.

Md Mostafijur Rahman does not work for, consult, own shares in or receive funding from any company or organization that would benefit from this article, and has disclosed no relevant affiliations beyond their academic appointment.