Farmers can save water with wireless technologies, but there are challenges – like transmitting data through mud 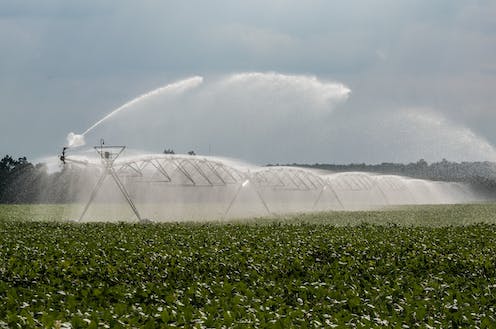 Water is the most essential resource for life, for both humans and the crops we consume. Around the world, agriculture accounts for 70% of all freshwater use.

I study computers and information technology in the Purdue Polytechnic Institute and direct Purdue’s Environmental Networking Technology (ENT) Laboratory, where we tackle sustainability and environmental challenges with interdisciplinary research into the Agricultural Internet of Things, or Ag-IoT.

The Internet of Things is a network of objects equipped with sensors so they can receive and transmit data via the internet. Examples include wearable fitness devices, smart home thermostats and self-driving cars.

In agriculture, it involves technologies such as wireless underground communications, subsurface sensing and antennas in soil. These systems help farmers track conditions on their land in real time, and apply water and other inputs such as fertilizer exactly when and where they are needed.

In particular, monitoring conditions in the soil has great promise for helping farmers use water more efficiently. Sensors can now be wirelessly integrated into irrigation systems to provide real-time awareness of soil moisture levels. Studies suggest that this strategy can reduce water demand for irrigation by anywhere from 20% to 72% without hampering daily operations on crop fields.

What is the Agricultural Internet of Things?

Even in dry places such as the Middle East and North Africa, farming is possible with efficient water management. But extreme weather events driven by climate change are making that harder. Recurrent droughts in the western U.S. over the past 20 years, along with other disasters like wildfires, have caused billions of dollars in crop losses.

In the past decade, wireless data harvesting technologies have begun to provide real-time access to soil moisture data, which makes for better water management decisions. These technologies could also have many advanced IoT applications in public safety, urban infrastructure monitoring and food safety.

The Agricultural Internet of Things is a network of radios, antennas and sensors that gather real-time crop and soil information in the field. To facilitate data collection, these sensors and antennas are interconnected wirelessly with farm equipment. The Ag-IoT is a complete framework that can detect conditions on farmland, suggest actions in response and send commands to farm machinery.

Interconnecting devices such as soil moisture and temperature sensors in the field makes it possible to control irrigation systems and conserve water autonomously. The system can schedule irrigation, monitor environmental conditions and control farm machines, such as seed planters and fertilizer applicators. Other applications include estimating soil nutrient levels and identifying pests.

The challenges of putting networks underground

Wireless data collection has the potential to help farmers use water much more efficiently, but putting these components in the ground creates challenges. For example, at the Purdue ENT Lab, we have found that when the antennas that transmit sensor data are buried in soil, their operating characteristics change drastically depending on how moist the soil is. My new book, “Signals in the Soil,” explains how this happens.

Farmers use heavy equipment in fields, so antennas must be buried deep enough to avoid damage. As soil becomes wet, the moisture affects communication between the sensor network and the control system. Water in the soil absorbs signal energy, which weakens the signals that the system sends. Denser soil also blocks signal transmission.

We have developed a theoretical model and an antenna that reduces the soil’s impact on underground communications by changing the operation frequency and system bandwidth. With this antenna, sensors placed in top layers of soil can provide real-time soil condition information to irrigation systems at distances up to 650 feet (200 meters) – longer than two football fields.

Another solution I have developed for improving wireless communication in soil is to use directional antennas to focus signal energy in a desired direction. Antennas that direct energy toward air can also be used for long-range wireless underground communications.

What’s next for the Ag-IoT

Cybersecurity is becoming increasingly important for the Ag-IoT as it matures. Networks on farms need advanced security systems to protect the information that they transfer. There’s also a need for solutions that enable researchers and agricultural extension agents to merge information from multiple farms. Aggregating data this way will produce more accurate decisions about issues like water use, while preserving growers’ privacy.

These networks also need to adapt to changing local conditions, such as temperature, rainfall and wind. Seasonal changes and crop growth cycles can temporarily alter operating conditions for Ag-IoT equipment. By using cloud computing and machine learning, scientists can help the Ag-IoT respond to shifts in the environment around it.

Integrating satellite-based network connectivity with the Ag-IoT can assist nonconnected farms where broadband connectivity is still unavailable. Researchers are also developing vehicle-mounted and mobile Ag-IoT platforms that use drones. Systems like these can provide continuous connectivity in the field, making digital technologies accessible for more farmers in more places.

Abdul Salam does not work for, consult, own shares in or receive funding from any company or organization that would benefit from this article, and has disclosed no relevant affiliations beyond their academic appointment.