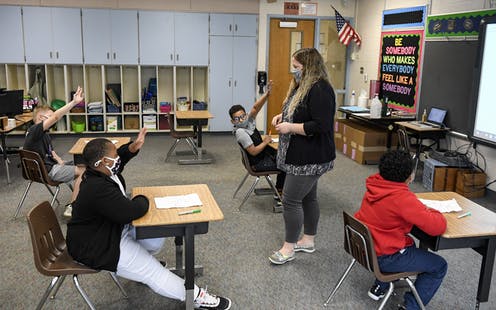 It has been 40 years since the U.S. Supreme Court first took up a case about special education in public schools, Board of Education of the Hendrick Hudson Central School District v. Rowley. In that case, the court ruled that a deaf student didn’t qualify for a sign-language interpreter because the student was doing well enough, even though an interpreter could have helped the student learn more and do better.

In the decades since Rowley, court orders and a few adjustments to federal laws have clarified the rights of students to get accommodations for various conditions and disabilities affecting their education. But the law governing these rights, now known as the Individuals with Disabilities Education Act, has not been updated significantly since its original passage in 1975, and has never gone so long without a full congressional review.

A move toward equality

In many ways, Rowley owes its existence to America’s first landmark ruling about equal educational opportunity: Brown v. Board of Education in 1954, which banned racial segregation in public K-12 schools. Efforts at desegregation continue, with the Civil Rights Division of the Department of Justice reporting it is handling “approximately 150 desegregation cases.”

During the initial push toward racial integration in the nation’s public schools, there was also a movement to integrate other disadvantaged students into public school classrooms: those with disabilities. The first major federal effort came in 1975 with the enactment of the Education for All Handicapped Children Act, renamed the Individuals with Disabilities Education Act in 1990.

The IDEA law has always applied to children between the ages of 3 and 21 who have intellectual disabilities, hearing impairments, speech or language impairments, or other specifically identifiable disabilities listed in the law. This is about 15% of the nation’s school-age population.

These children have the right to a “free appropriate public education” in the “least restrictive environment” possible in which their needs can be met. This means that unless their conditions dictate otherwise, they must be placed in classrooms with peers of the same age who are not disabled.

Students must also receive, at no cost to their parents, specially designed instruction with programming detailed in their Individualized Education Programs and related support services. This might include transportation services and even sign-language interpreters, which were at issue in the Rowley case.

Controversy over the meaning of the law began in earnest in 1982 with the first Supreme Court case interpreting it.

Based on that law, and the overall principle of equal educational opportunity, in 1979 the parents of 8-year-old Amy Rowley, who was born deaf, filed suit in a federal court against school officials in the Hendrick Hudson Central School District, just north of New York City, who had denied their request for a sign language interpreter to accompany Amy during classes.

A hearing officer and lower courts agreed that Amy was entitled to an interpreter. But the school district appealed to the Supreme Court. In their ruling, the justices noted that Amy did well in school and could read her teachers’ lips. They declared that an “appropriate” education – which was required by law – only needed to be “sufficient to confer some educational benefit.” The school only needed to provide “a basic floor of opportunity” instead of all the help she needed to reach to her full potential.

The court concluded that because she earned passing grades, Amy was not entitled to an interpreter – even though she might have achieved at a higher level with the additional assistance. Not long after the ruling, Amy’s family moved to another school district, where she had the assistance of interpreters – and Amy went on to earn a Ph.D. and become a university professor.

Over the years following its ruling on the Rowley case, the Supreme Court also took up other cases about the rights of students with disabilities. In Honig v. Doe in 1988, the court declared that officials must involve parents in decisions about how to discipline students whose misbehaviors are manifestations of their disabilities.

In 1984, the court ruled that students who needed it were entitled to services they needed, such as catheterization while in school, and even, after a 1999 ruling, the personal attendance of a nurse during the school day.

In addition, the court addressed the rights of parents of children with special needs. Over the course of various rulings from 1986 to 2012, for instance, the court ruled that parents could file suit in their own right – not just on behalf of their children – if they disagreed with how public schools were assisting their children.

The court has repeatedly ruled that there are some limits on parental rights. The court has regularly held that parents can challenge Individualized Education Programs, the legal and clinical documents that spell out a student’s needs and the services promised to meet those needs.

But in 2006, the court ruled that parents could not recoup the costs for expert witnesses if they prevailed in court against school boards. Despite three attempts to include that requirement in updates to the law, parents remain on the hook for expert witness fees, which can cost hundreds of dollars per hour.

And in 2007, the justices ruled that the parties challenging students’ Individualized Education Programs, typically parents, must prove that the plans do not meet children’s needs.

A shift for the future

In 2017, 35 years after its decision in Rowley, the Supreme Court revisited its initial low standard requiring just a bare minimum of support for students with disabilities.

In the case of Endrew F. v. Douglas County School District, the justices considered an IEP assigned to a student with autism by a school board in Colorado. They determined that “[t]o meet its substantive obligation under the IDEA, a school must offer an IEP reasonably calculated to enable a child to make progress appropriate in light of the child’s circumstances.” Progress – and potential – were the new standards, not merely getting by.

Now, 40 years after Rowley, Congress has not fully revisited the IDEA since 2004. And it is unclear whether or how Congress might amend the IDEA to ensure that students with disabilities continue to receive the educational programming this vulnerable population of children needs to thrive in school and beyond.

Charles J. Russo does not work for, consult, own shares in or receive funding from any company or organization that would benefit from this article, and has disclosed no relevant affiliations beyond their academic appointment.