Decades after Brown v. Board, US schools still struggle with segregation – 4 essential reads 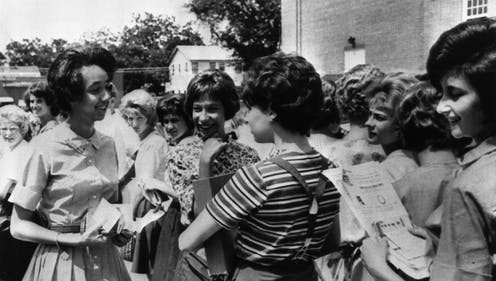 The Supreme Court’s Brown v. Board of Education decision, handed down in 1954, was supposed to end racial segregation in the nation’s public schools. But that work remains undone, as evidenced by a U.S. Department of Justice collection showing dozens of active school-desegregation cases even in 2022.

To take a more in-depth look at the prevalence and nature of contemporary school segregation in the U.S., The Conversation sought scholars who could discuss the topic from various standpoints – from its legal history to its current status and modern-day efforts to make schools inclusive beyond racial identity. Here are four selections from our past coverage.

1. The Brown case wasn’t the beginning

The fight for full equity in schools first went to the courts in 1947, when a group of Black parents in South Carolina wanted their kids to be allowed to ride the bus to school, as the white students could. When the case finally went to federal court in 1951, writes equity scholar Roy Jones at Clemson University, a federal judge suggested more – a suit against school segregation itself.

“A month later, [civil rights lawyer Thurgood] Marshall brought a new case, Briggs v. Elliott, … arguing that school segregation in South Carolina was unconstitutional. This was the first lawsuit in the country to challenge school segregation as a violation of the U.S. Constitution,” Jones writes. “The Brown v. Board case eventually grew out of that South Carolina case.”

Read more:
The fight against school segregation began in South Carolina, long before it ended with Brown v. Board

The Brown decision declared that public schools could not be segregated by race anymore, but the process took years and is still incomplete, writes Pedro Noguera, an educational sociologist at the University of Southern California.

“American society continues to grow more racially and ethnically diverse. But many of the nation’s public K-12 schools are not well integrated and are instead predominantly attended by students of one race or another,” he writes.

Read more:
US schools are not racially integrated, despite decades of effort

Racial differences aren’t the only way U.S. schools are segregated. Education policy scholar Kari Dalane at the American University School of Public Affairs and a collaborator looked at how students are split up into classrooms within schools.

“We found that … economically disadvantaged students were increasingly likely to be concentrated in a subset of classrooms rather than spread out relatively evenly throughout the school,” Dalane writes.

That’s a problem because, as she explains, “more experienced teachers raise student test scores more than novice teachers, on average. However, novice teachers are frequently assigned to classrooms with more low-income students. Therefore, the more students are separated along lines of household income, the more likely poorer students are to fall behind academically.”

Read more:
Students are often segregated within the same schools, not just by being sent to different ones

In the wake of the Brown decision came another effort – to include children with disabilities in the nation’s classrooms, rather than sending them to specialized schools focused on addressing their weaknesses.

A 1979 lawsuit ultimately asked the Supreme Court to interpret a 1975 law that said “children have the right to a ‘free appropriate public education’ in the ‘least restrictive environment’ possible in which their needs can be met,” explains education law scholar Charles Russo at the University of Dayton.

The lawsuit didn’t go well. In 1982, the Supreme Court ruled that a deaf student didn’t qualify for a sign-language interpreter because the student was doing well enough, even though an interpreter could have helped the student learn more and do better.

It took 35 years – until 2017 – for the Supreme Court to rule that schools owed students with disabilities an actually equal chance to make the most of their talents and promise. “Progress – and potential – were the new standards, not merely getting by,” Russo writes.

But it’s not clear how long it will take before every child has those opportunities.