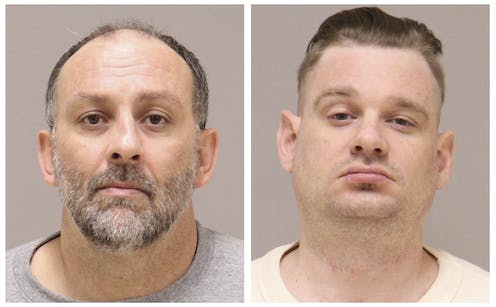 Two of the six men facing federal charges in a plot to kidnap Michigan Gov. Gretchen Whitmer in 2020 were found guilty by a federal jury on Aug. 23, 2022.

The verdict in the trial of co-defendants Adam Fox and Barry Croft Jr. comes after a previous trial ended in acquittals for two other co-defendants, Daniel Harris and Brandon Caserta, and mistrials for Fox and Croft. Their two other alleged accomplices, Ty Garbin and Kaleb Franks, pleaded guilty and agreed to cooperate with the prosecutions against the others.

All six were members of the Wolverine Watchmen, a militia group in Michigan who felt compelled to act against Whitmer’s COVID-19 restrictions. Several other members of the Watchmen still face state charges for their alleged roles in the kidnapping plot.

Observers like me knew relatively little about the Wolverine Watchmen when the men were first arrested in October 2020. I have studied the U.S. domestic militia movement for 12 years. I have learned about general militia structures, and I have conducted in-depth interviews and done extensive fieldwork with militia groups. I have long-standing contacts who have informed my understanding of groups. And still, I do not believe it’s possible to know the full extent of the defendants’ intentions or abilities.

But I do know that violent threats and plots need to be treated seriously – especially those that focus on specific people and their supposed tyranny.

It will also be important to observe how militias and related groups respond to these convictions: Claims that the judicial process was corrupt have already surfaced, which could fuel additional mistrust in American political systems as the nation heads into midterm congressional elections.

What is this group, and where did it come from?

In 2020, reports from my militia contacts and other sources indicated the Wolverine Watchmen had split off from the larger Michigan Liberty Militia, which had featured prominently in an April 2020 Michigan state lockdown protest that garnered national attention.

The Wolverine Watchmen appear to be a type of militia called “millenarian,” which tends to be dangerous, secretive, conspiracy-oriented and anti-government. This is in contrast with the other type of militia unit – “constitutionalist” – whose members still train with firearms but take a much more defensive, rather than offensive, stance toward the government.

The exact cause of the split is not clear, but I have witnessed in my work that fractures are exceedingly common in militia groups because of personality conflicts or disputes over a group’s goals and plans, as well as whether their actions are private or in public.

In a similar vein, it also appears that Adam Fox, the plot’s alleged mastermind, had been kicked out of yet another militia group called the Michigan Home Guard before joining the Watchmen. Public reports of this incident match what militia informants have reported to me about Fox’s volatility both in person and on social media.

Other members may have been recruited to the Watchmen at multimilitia events the unit was known to attend or even host. Insiders tell me that some members may have followed Fox when the Home Guard largely dissolved following one leader’s participation in a “60 Minutes” interview that was perceived as harmful to the militia movement.

What are their aims or goals?

Several of those initially charged are affiliated with the Boogaloo movement, a loose ideology whose adherents seek to foster varying degrees of social upheaval, often through attacks on law enforcement or other government representatives.

Watchmen commander and co-founder Joseph Morrison, for example, included “Boogaloo” as part of his online handle.

Boogaloo ideology is not synonymous with millenarianism but is much more similar than it is to the more reserved constitutionalist outlook. Boogaloo shares with millenarianism a desire for violence and disruption, and both perspectives can be further incited by a variety of conspiracy fantasies, such as those that enhance believers’ perceptions of political opponents as not just wrong-thinking, but evil.

Co-conspirator Ty Garbin testified that the ultimate goal of the kidnapping plot was “to cause as much disruption as possible to prevent Joe Biden from getting into office.”

Garbin’s stated focus specifically on Biden – and, by default, ensuring a continued Trump presidency – would imply that the Watchmen did not want to completely overthrow the government but instead retain a leader who met their approval.

Prosecutors, however, used even stronger language than Garbin in the second federal trial, asserting that Croft and Fox wanted to start a “second American Revolution.” This is a variation of a goal at the extreme end of the Boogaloo spectrum: to initiate a second civil war.

Despite the common disdain for Whitmer and government COVID-19 policies that brought these men together, they had ideological differences, too.

Brandon Caserta, for example, posted an anti-Trump video, while Daniel Harris had previously protested against police brutality and in support of Black Lives Matter.

I have observed some online commentators dismiss those actions as tactical maneuvers to make militias seem less exclusionary than they really are. However, in my experience, militia members hold a complex array of personal beliefs, including support for racial equality that is sincere even if not entirely informed about the full scope of modern racism.

Were they a serious threat?

Questions remain among some militia members and their supporters about the seriousness of the Watchmen’s plot. At the time of their arrests, militia members who knew some of the defendants told me they doubted their ability to actually execute the complicated plan.

While I continue to hear disparaging remarks about Croft and Fox in particular, most of the skeptical focus has since shifted to the integrity of the investigation.

The defense team in the original trial argued the plot was actually the creation of undercover agents or informants involved in the investigation. The first jury may have found this argument persuasive for Harris’ and Caserta’s acquittals, but it seems to have fallen short as an explanation for Fox and Croft in both trials.

Militia supporters have nonetheless noted that some texts and other communications from informants were not shared with jurors in either federal case, a fact they believe supports defense attorneys’ arguments that FBI agents engaged in entrapment.

And some supporters of the defendants have raised concerns about the background and behavior of FBI agents who were involved in the case, apparently seeking to impeach their credibility. One agent was arrested for violently assaulting his wife, while yet another was removed from the list of witnesses after facing allegations of perjury in a different case.

Jurors in the ongoing state trial of the eight other members of the Watchmen will be barred from hearing this information about the FBI agents’ actions, which further contributes to the perceptions some militia-world actors have about the unfairness of the process.

This article is based on a previous article published Oct. 9, 2020.

Amy Cooter is a Senior Research Fellow at Middlebury College's Center for Terrorism, Extremism, and Counterterrorism. After the previous The Conversation article, defense attorneys for Adam Fox asked for her expert insights on the usual structures and activities of militia groups, but she received no detailed information about the case or any defendants beyond what was presented at trial. Dr. Cooter is a prior recipient of the National Science Foundation Graduate Research Fellowship.