Conservative leadership election: why a run-off between Penny Mordaunt and Rishi Sunak is unlikely 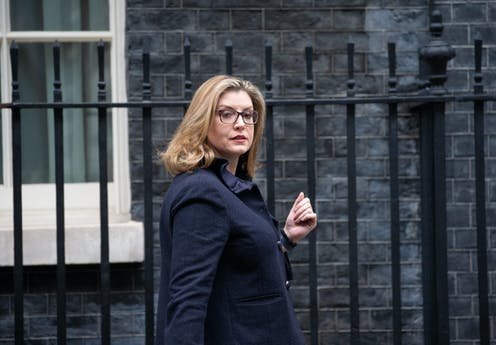 A second round of voting among Conservative MPs has whittled the candidates in the running to replace Boris Johnson as leader down to five. Rishi Sunak, the former chancellor, finished top with the votes of 101 Tory MPs, Penny Mordaunt, the international trade secretary, was second with 81, and the foreign secretary, Liz Truss, was third on 64. Among the other candidates, Kemi Badenoch won 49 votes, Tom Tugendhat 32, and Suella Braverman 27.

As the bottom-ranked candidate, Braverman was eliminated while the others went through to the next round on Monday July 18. MPs will continue voting in further ballots until only two candidates remain. Then members of the Conservative party will choose between those two.

On the face of it, Sunak and Mordaunt look well placed to make the membership ballot. However, the selection system tends to operate as dual “primaries” of the centrist and right-wing candidates. Votes generally transfer within ideological blocs when candidates are eliminated, although there is also some cross-bloc switching.

In general terms, Mordaunt and Sunak, along with Tugendhat are the centrist candidates on economic and cultural policy, which includes debates over transgender issues, free speech and the like. Truss and Badenoch (and Braverman), meanwhile, take more right-wing positions.

Given that the final parliamentary ballot will consist of three candidates fighting for two places among an electorate of 358 Tory MPs, 120 votes will guarantee a candidate a top-two finish and a place in the membership ballot. Adding up the votes of Truss, Badenoch and Braverman shows that a combined 140 votes were cast for candidates of the right in the second ballot (up from 122 in the first ballot). If the supporters of eliminated right-wing candidates keep switching to other right-wing candidates, the right has enough votes to put one of its candidates to the membership (with the caveat that some may possibly have been tactical votes).

Hoping to become that right-wing candidate, Truss and Badenoch will spend the weekend trying to persuade Braverman’s supporters to switch to one of them. As one of the favourites for the contest, Truss underwhelmed in the first ballot with 50 votes, while newcomer Badenoch’s 40 votes exceeded expectations. But Truss has stabilised her position as the front-runner of the right. Her task is to perform creditably in the two televised debates this weekend – not her forte – to hold off the charismatic Badenoch’s charge.

Truss will probably emphasise her experience as a cabinet minister, especially her record of delivery as the international trade secretary in signing post-Brexit deals. She will hope to eliminate Badenoch in the fourth round of voting on Tuesday and unite the right-wing bloc. She will also seek to appeal to some centrist MPs by stressing that she is the more “moderate” of the right’s candidates.

The main danger for Truss would be if Badenoch took the debates by storm. But Badenoch’s lack of any cabinet experience makes her a risky choice for MPs. A new prime minister must hit the ground running, and top-level governmental experience is usually considered vital. Truss has served eight years in the cabinet – more than any other candidate.

A major fight is underway between Sunak and Mordaunt to be the leading centrist candidate. Sunak has topped the first two ballots, but his ascendancy is far from secure. He has failed to win 30% of the votes so far, which does not suggest a candidate with runaway popularity and whose victory looks inevitable. By contrast, Johnson won 40% of MPs in the second ballot in the 2019 contest.

Other candidates have attacked Sunak over his tax rises as chancellor. He was damaged by a poll that showed him losing to every other major candidate in head-to-head contests in the member ballot. Questions were also raised about his loyalty when it emerged that he had registered a leadership campaign website in December 2021 while serving as chancellor in Johnson’s cabinet.

Mordaunt has been the surprise candidate so far. The same poll saw her beating every other candidate in head-to-heads. She unexpectedly surged to second place in the first ballot and closed the gap on Sunak in the second. She will be hoping to win the bulk of Tugendhat’s supporters if he is eliminated next.

But Mordaunt’s campaign is suffering turbulence. Keen to undermine her surge, rivals drew attention to her previous statements on transgender issues, of which many party members might not previously have been aware. When she was a minister in Theresa May’s government, Mordaunt told MPs that “trans-men are men, trans-women are women”. Critics allege that she resisted using the words “woman” and “mother” in a bill she introduced to parliament, preferring “pregnant person” before being forced to back down. Mordaunt herself has clearly understood that her past comments could damage her chances and has begun making statements about gender that seek to shift her position closer to the Tory mainstream.

Whether or not they are convinced by this shift, members will be aware that Mordaunt has also been accused of lying about her position on transgender issues. This is a serious charge in a party whose leader has just had to resign in large part because of questions over his honesty and integrity.

Things became worse when David Frost, the former Brexit negotiator, accused Mordaunt of performing incompetently as his deputy to the point where he asked the prime minister to shift her to another role.

The main candidates for the leadership all face difficulties heading into the third ballot. Sunak is battling the perception that he is responsible for unpopular policies. Mordaunt faces increasing scrutiny of her beliefs, competence and honesty. Truss is trying to head off an insurgent Badenoch and battling the perception that she is uncharismatic.

A centrist-versus-right contest looks more than likely in the membership ballot, with Truss facing either Sunak or Mordaunt. But nothing is guaranteed in this unpredictable contest. Badenoch’s support is somewhat heterogeneous and might not all transfer to Truss.

If Truss underperforms in the televised debates, she could fail to maximise the right-wing bloc. If she started leaking centre-right supporters to Sunak and Mordaunt, there would be a risk of her finishing third in a close-run final ballot. But Sunak and Mordaunt cannot rely on the right imploding. They will each spend the weekend presenting themselves as the strongest centrist bet.

Tom Quinn does not work for, consult, own shares in or receive funding from any company or organisation that would benefit from this article, and has disclosed no relevant affiliations beyond their academic appointment.