College students are increasingly identifying beyond ‘she’ and ‘he’ 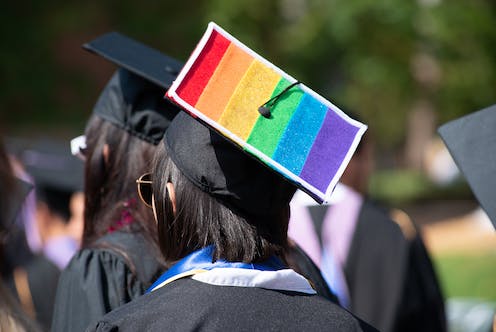 When students today fill out their college applications, they are not just identifying as “she” or “he.” More than 3% of incoming college students use a different set of pronouns. That’s according to my analysis of the more than 1.2 million applications submitted for the 2022-23 school year through the Common App, an online application platform used by more than 900 colleges.

While 3% may not seem like a lot, it represents nearly 37,000 students. It is also indicative of a growing number of young people who identify outside of a gender binary – that is, they do not identify as female or male. For example, the percentage of college students who indicated that they are nonbinary on one national survey has nearly tripled from 1.4% in 2016 to 4.1% in 2021.

In analyzing the data from the Common App, I found that 2.2% of students – more than 26,000 individuals – who applied to college for this fall identified as transgender or nonbinary. This figure is likely an undercount because some students may be reluctant to indicate their gender identity on an admissions form. For instance, students often complete their college applications with their families and are unlikely to state that they are trans or nonbinary if they are not out to them.

The leaders of the Common App provided me with data from the college applications for the 2022-23 school year so that I could analyze how students today identify their gender and what pronouns they use. Students’ names and other identifying information were withheld.

In looking at how students named their gender and pronouns on the Common App, two contrasting trends stood out to me.

One is the number of ways that nonbinary students have developed to describe their gender. Whereas trans people used relatively few gender identity labels for themselves when I came out as nonbinary in the late 1990s, these students provided approximately 130 different genders and about 78 different pronoun sets – from “ae/aem,” which was first used in a 1920 science fiction novel with third-gender characters who were born from air, to “ze/zir,” which is likely based on the German plural third-person pronoun “sie.”

Through their use of different gender labels and pronouns, young nonbinary people are making detailed distinctions between different gender identities and showing how gender is unique to the individual. For example, the most common gender identity written in by the students was “genderfluid,” which was given by more than 40% of the write-ins. At the same time, many students named the specific way that their gender is fluid, such as genderfae individuals, whose gender can be fluid between feminine genders, nonbinary genders and genderlessness but which does not encompass masculine genders.

In contrast to the proliferation of gender labels, the other major trend among the college applicants was the common use of “they/them” pronouns.

Of the students who went by pronouns other than just “she/her” or “he/him,” nearly 97% indicated using “they/them” as one of their pronoun sets. Just 19 students reported using only neopronouns, or new pronouns – that is, third-person singular pronouns other than the common ones of she, he, they and it – for themselves.

The use of “they/them” in the singular is not new. The practice goes back at least to the 1300s. The singular “they/them” fell out of favor in the 1800s, when “he/him” began to be widely used generically to refer to someone in the third person, despite opposition from many women.

Unlike earlier attempts to create a singular third-person pronoun, the singular “they/them” has caught on in the larger society. It is considered appropriate language by online dictionaries, writing style guidelines and the news media. “They” in the singular was even declared “word of the year” by Merriam-Webster in 2019. The American Dialect Society designated “they” as “word of the decade” for the 2010s.

The widespread usage of “they/them” may be a recognition by many nonbinary students of the difficulty of getting others to use pronouns that may not be well known even in trans communities. This was my own experience.

When I came out as nonbinary decades ago, I asked others to use “ze/hir” – pronounced “zee” and “here” – for me. But few people did. Unlike “they/them,” it was not language they knew or were comfortable using. After a few years, I decided to go by “they/them” and found people generally more willing and readily able to respect my identity. It certainly helped that I worked in higher education directing an LGBTQ+ center.

Despite the growing visibility of neopronouns today, people who use these pronouns still struggle to get others to learn and respect them. Neopronouns are hardly more accepted in the larger society now than they were when I used them in the late 1990s, or when they were proposed as early as the 1700s.

But knowing all possible gender options should not be the point. What I think matters is knowing how the people in our lives see their gender and what pronouns they use for themselves and then using these pronouns.

This may involve learning different words to refer to someone, but people are always learning new terms. How many people knew the word “coronavirus” five years ago?

Using new pronouns for others affirms who they are and enables them to feel respected and seen. For many young nonbinary people who report that they are often misgendered, receiving support for their gender identities can improve their mental health and reduce their sense of social stigma. It really does not take much to learn to use pronouns like “ze/hir” or “xe/xem” (pronounced “zee” and “zem”), but it can go a long way toward building a positive relationship with someone and creating an inclusive culture for nonbinary people.

Genny Beemyn does not work for, consult, own shares in or receive funding from any company or organisation that would benefit from this article, and has disclosed no relevant affiliations beyond their academic appointment.