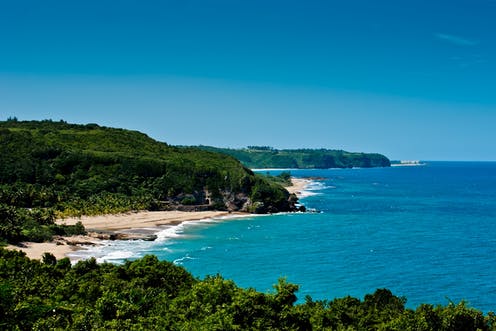 As world travel rebounds after two years of COVID-19 shutdowns and restrictions, marketers and the media are promoting Puerto Rico as an accessible hot spot destination for continental U.S. travelers. The commonwealth set a visitor record in 2021, and it is expanding tourism-related development to continue wooing travelers away from more exotic destinations.

Tourism income is central to Puerto Rico’s economy, especially in the wake of heavy damage from Hurricane Maria in 2017. But it comes at a cost: destruction of mangroves, wetlands and other coastal areas. Puerto Rico is no stranger to resort construction, but now widespread small-scale projects to meet demand for rentals on platforms like Airbnb are adding to concerns about coastal gentrification and touristification.

As scholars who study anthropology and coastal communities, we believe it is important to understand what Puerto Rico is losing in the quest for ever-increasing tourist business. For the rural coastal communities where we do our research, habitat is tied to residents’ cultural identity and economic well-being.

For the last two decades, we have documented how many rural Puerto Ricans’ lives are inextricably linked to coastal forests and wetland habitats. These communities often are poor, neglected by the state and disproportionately affected by pollution and noxious industries. Decisions about the future of the coast too often are made without accounting for human impacts.

Once-scorned areas are now in demand

Estuaries and coastal forests are some of Earth’s most biodiverse and productive ecosystems. Millions of people rely on mangroves and coastal wetlands to make a living.

Around the world, these areas are under stress from climate change, tourism and luxury residential development. But these zones weren’t always prized so highly.

In Puerto Rico and elsewhere in the Americas, wetlands historically were seen as undesirable and even dangerous places to live and work. They often were settled by the poor and dispossessed, most notably Afro-descendant people and Indigenous communities, who made livings fishing, foraging, harvesting coconuts, cutting wood and making charcoal.

In the early 20th century, however, tropical coasts started attracting attention from the global leisure class. In 1919, the Vanderbilt Hotel opened in San Juan, followed in 1949 by the massive Caribe Hilton resort – the first Hilton hotel outside the continental U.S., built in partnership with the Puerto Rican government. Many more hotels followed, along with casinos and golf courses.

Today, Puerto Rico’s rural coastal communities have to compete for space and resources against tourism development, gentrification, urbanization, industry and conservation. Often these uses are not compatible with local lifestyles.

For example, people from communities near mangrove forests, like Las Mareas in southern Puerto Rico, are no longer permitted to harvest small amounts of mangrove wood to build traditional fishing boats. At the same time, they see wealthy residents and developers destroying entire tracts of mangrove forest with impunity. Some coastal communities are starting to push back.

Beaches are for the people

In March 2022, Eliezer Molina, an environmental activist, engineer and 2020 gubernatorial candidate, posted an exposé on YouTube of the illegal cutting and filling of a mangrove shoreline in the Las Mareas neighborhood in Salinas’ Jobos Bay. As Puerto Rico’s second-largest estuary and only Federal Estuarine Reserve, the bay is an important and sensitive habitat for birds, turtles and manatees, and a nursery for many types of fish.

Wealthy Puerto Ricans clandestinely developed this waterfront site for weekend homes. Residents of Las Mareas had been alerting local authorities for well over a decade about destruction of the mangroves, to no avail. Federal authorities and Puerto Rico’s Justice Department are now conducting a criminal investigation of the illegal construction.

This case led to widespread public outrage about similar instances around the archipelago. Puerto Ricans are condemning local government agencies online and in person for what they describe as incompetence, corruption and a lack of monitoring and oversight.

One hot-button issue is privatization and destruction of the Zona Marítimo Terrestre, or Terrestrial Maritime Zone. This area is legally defined as “Puerto Rico’s coastal space that is bordered by the sea’s ebb and flow” – that is, between the low and high tide or up to the highest point of the surf zone. It includes beaches, mangroves and other coastal wetlands, and is publicly owned.

Coastal development generates a lot of money in Puerto Rico, but what is gained by conserving these areas for use by local communities? In research that we carried out in 2010-2013 and 2016-2021, we found that coastal resources provide many benefits for local residents that are not easily replaced.

Our results show that about one-third of households in these communities rely on coastal goods for at least part of their income, while more than two-thirds rely on them as food sources. Local harvesters supply family-owned seafood restaurants with foods such as land crabs, helping to attract economic activity to the coast.

We also found that residents rely more heavily on local coastal foods during times of severe economic stress, such as recessions and natural disasters. In the aftermath of Hurricanes Irma and María, for example, many residents in the southern towns of Salinas and Santa Isabel harvested unusually abundant land crabs when it was hard to find other foods. Some even saw this abundance as divine restitution for the suffering the storm inflicted on them.

Local economies in these communities consist mainly of small-scale, community-based transactions that include gifting, bartering and selling. Their social and economic impacts often go unnoticed and are underestimated in official economic accounts, so they aren’t reflected in decisions about coastal development. But as our work shows, coastal ecosystems are ecologically, economically and socially productive places.

In 2010, we asked people living along Puerto Rico’s southern coast: “What would your community look like without access to the mangrove and its bounties?” The owner of a family restaurant, replied: “The answer is easy. Without access to coastal resources, this community would be dead and sad.”

Carlos G. García-Quijano has received funding from the National Science Foundation and the National Oceanic and Atmospheric Administration-Sea Grant.