Boris Johnson: four key insights from recent polls can help us see where the crisis is heading 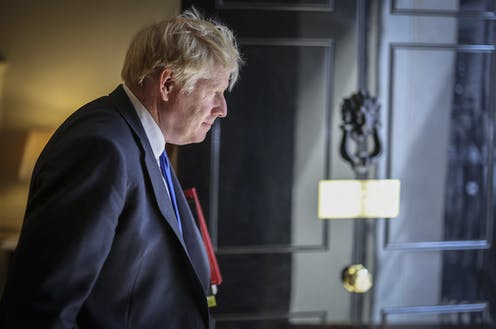 Boris Johnson has been called a Heineken politician – he can reach parts of the public other politicians cannot. Yet scandal after scandal amid worsening economic conditions and a swathe of strikes has left the country with a hangover. The public and, most importantly for Johnson, the Conservative party, are showing signs that they are ready to give up the bottle.

Rishi Sunak and Sajid Javid, two of the country’s most senior politicians, resigned following the government’s disastrous handling of allegations of sexual assault against former deputy chief whip Chris Pincher. They were followed by a record-breaking number of further resignations, including from Johnson loyalists.

A look at recent polling can tell us a lot about where Johnson and his party are heading next.

However, by almost the exact same margin, most people think he won’t actually resign. Importantly, those who voted Conservative in 2019 were more likely than the rest to think Johnson would go. Over a quarter of this group responded that Johnson would “definitely” or “probably” resign.

These findings are a serious problem for Johnson. It’s also a reflection of people’s belief in the political system. A strong majority of the public think he should leave, but very few have faith that he is going to.

Johnson is no longer an asset in elections

Most of the ministers who have resigned so far cited the crisis of public trust or faith in the government’s agenda as the final straw. Yet likely a more important factor is that Johnson is no longer helpful at the ballot box. The Conservatives are in a perilous position for the next general election.

Personal approval ratings for Johnson plummeted when the partygate scandal broke, and have failed to recover. He is not popular with the public, as was made abundantly clear when his party lost recent byelections – in very different battlegrounds and by damaging margins – to the Liberal Democrats and Labour. For the first time, multiple demographic groups are turning against the PM.

Combining byelection losses and MPs losing the whip, the government is already reduced to a 67-seat majority in Parliament. This is not counting those who may have voted with the government before but have now defected to the rebels.

Current polling predicts the Conservatives would lose their majority entirely if an election were held today. Many of the potential losses are in places that Johnson, rightly or wrongly, is perceived to have personally won over.

This does not mean Labour would win or the Conservatives would leave government. But it does mean they’re in a far weaker position than before.

Leadership hopefuls are split on strategy

Until now, doubts over who could replace Johnson as party leader have held many Conservative MPs back from cooperating in attempts to oust him. But as the situation worsens for Johnson, minds will now be focused more sharply on identifying a successor. Some MPs with ambitions for leadership appear to think the best strategy is to flee the ship as it sinks. Others see their association with Johnson as an asset because of his successes prior to this crisis.

Sunak and Javid may have judged that by jumping at the right time, they have distanced themselves enough from Johnson to stand a chance of running for the leadership themselves. Nadhim Zahawi, the new chancellor, may feel a period at the top would set him up as the continuity figure – though the strength of that argument depends on how long he stays in post before a leadership contest.

At least as far as the Tory members are concerned, their favourites are instead Ben Wallace and Penny Mordaunt. The latter has the current advantage of having distanced herself from Johnson since the start. Crucially, however, neither of these figures have a sizeable public profile.

The only one that has both popularity among members and public visibility is foreign secretary Liz Truss. But she is a Johnson ally, so the question of whether the public wants a leader who has been associated with Johnson or want a clean break is paramount for her. The Tory party will be acutely aware of this conundrum as it decides on its options.

The Johnson government has triggered a crisis of trust

After the 2019 election, Johnson argued it was his time to restore trust in politics. The resignation letters, citing his dreadful record on that objective, suggest his colleagues think he has done the opposite. And the public agree: a look at the polling shows that only 13% of people think Johnson is trustworthy – an abysmal rating. For context, pollster Chris Curtis points out that these results mean that more people believe the moon landings were faked than think the prime minister can be trusted.

This is in the context of already fairly low levels of trust in politics generally, when we compare it to the global picture: only around a third of British people express that they trust the government when asked.

As the importance of trust issues increases, this may factor in people’s choices at the ballot box. Many will be asking themselves if they trust the government to lead the country through a very rocky period ahead. Others will wonder if this government can be trusted to uphold the ethical standards they expect from their leaders.

It is not clear who, if anyone, will be able to reverse the perception that the Conservative Party is untrustworthy, nor how long it will take. But finding someone who has distanced themselves from Johnson early on may help.

Daniel Devine has received funding from the Economic and Social Research Council.