A brief history of Esperanto, the 135-year-old language of peace hated by Hitler and Stalin alike 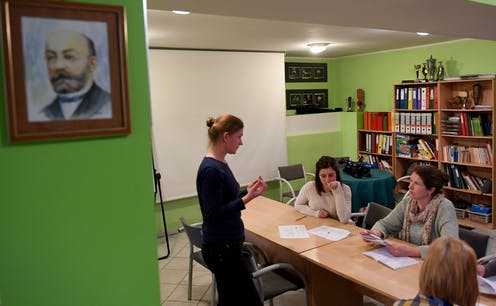 In the late 1800s, the city of Białystok – which was once Polish, then Prussian, then Russian, and is today again part of Poland – was a hub of diversity, with large numbers of Poles, Germans, Russians and Yiddish-speaking Ashkanazi Jews. Each group spoke a different language and viewed members of the other communities with suspicion.

For years, L.L. Zamenhof – a Jewish man from Białystok who had trained as a doctor in Moscow – had dreamed of a way for diverse groups of people to communicate easily and peacefully.

On July 26, 1887, he published what is now referred to as “Unua Libro,” or “First Book,” which introduced and described Esperanto, a language he had spent years designing in hopes of promoting peace among the people of the world.

Esperanto’s vocabulary is mostly drawn from English, French, German, Greek, Italian, Latin, Polish, Russian and Yiddish, as these were the languages that Zamenhof was most familiar with. Grammatically, Esperanto was primarily influenced by European languages, but interestingly, some of Esperanto’s innovations bear a striking resemblance to features found in some Asian languages, such as Chinese.

Now, 135 years later, Europe is again riven by violence and tension, most notably by the war between Russia and Ukraine, which is at least partially driven by a political debate about language differences. Unfortunately, conflicts over language are common around the world.

The promise of peace through a shared language has not yet caught on widely, but there are perhaps as many as 2 million Esperanto speakers worldwide. And it’s still spreading, if slowly.

A language for all

Having grown up in the multicultural but distrusting environment of Białystok, Zamenhof dedicated his life to constructing a language that he hoped could help foster harmony between groups. The goal wasn’t to replace anyone’s first language. Rather, Esperanto would serve as a universal second language that would help promote international understanding – and hopefully peace.

Esperanto is easy to learn. Nouns do not have grammatical gender, so you never have to wonder whether a table is masculine or feminine. There are no irregular verbs, so you don’t have to memorize complex conjugation tables. Also, the spelling is entirely phonetic, so you’ll never be confused by silent letters or letters that make different sounds in different contexts.

In “Unua Libro,” Zamenhof outlined Esperanto’s 16 basic rules and provided a dictionary. This book was translated into more than a dozen languages, and at the beginning of each edition, Zamenhof permanently renounced all personal rights to his creation and declared Esperanto to be “the property of society.”

Soon, Esperanto spread to Asia, North and South America, the Middle East and Africa. Starting in 1905, Esperanto speakers from around the world began gathering once a year to participate in the World Esperanto Congress to celebrate – and use – the language.

Between 1907 and his death in 1917, Zamenhof received 14 nominations for the Nobel Peace Prize, though he never won the award.

Continuing Zamenhof’s work, the Universal Esperanto Association, an organization that seeks to encourage relations among people through the use of Esperanto, has been nominated for the Nobel Peace Prize more than 100 times in recognition of its “contribution to world peace by permitting people in different countries to enter direct relations without linguistic barriers.” So far, it has never won the award.

However, this proposal was vetoed by the French delegate, who feared that the French language would lose its position of prestige in diplomacy. In 1922, the French government went a step further and banned the teaching of Esperanto at all French universities for supposedly being a tool to spread communistic propaganda.

Ironically, life behind the Iron Curtain wasn’t much easier for Esperanto speakers. In the Soviet Union, Esperantists were alleged to be part of an “international espionage organization.” Many were persecuted and later perished during Stalin’s Great Purge.

According to Hitler, Esperanto was evidence of a Jewish plot to take over the world. During the Third Reich, the Gestapo received specific orders to search for the descendants of Zamenhof. All three of his children died in the Holocaust – as did many Esperanto speakers.

Despite such events, in 1954 the United Nations Educational, Scientific and Cultural Organization, better known as UNESCO, passed a resolution recognizing – and entering into a relationship with – the Universal Esperanto Association, which opened the door for the Esperanto movement to be represented at UNESCO events pertaining to language.

In 1985, UNESCO passed a resolution encouraging countries to add Esperanto to their school curricula. For years, China has offered Esperanto as a foreign language option at several of its universities, one of which houses an Esperanto museum. There is now a program in interlinguistics offered at Adam Mickiewicz University in Poland that’s taught in Esperanto.

More recently, UNESCO declared 2017 as the year of Zamenhof, and since that time, its flagship journal – The UNESCO Courier – has had an Esperanto-language edition published quarterly.

Give peace a chance

Today, Esperanto is spoken by pockets of enthusiasts all around the world – including on Antarctica. There is now a wide array of free Esperanto resources online, including Duolingo, lernu!, the Complete Illustrated Dictionary of Esperanto, the Complete Manual of Esperanto Grammar and Google Translate.

Esperanto also has its own edition of Wikipedia, and at present, there are more Wikipedia entries written in Esperanto than articles in Danish, Greek or Welsh.

In Esperanto, the word “Esperanto” means “one who hopes.” Some may argue that it is idealistic to believe that Esperanto could unite humanity, especially in the midst of another major war.

But even the most violent wars don’t end without peace talks – which often require translators to interpret the languages of the opposing parties. Zamenhof wondered – and I do too – whether violence itself might be less common if a neutral language could help people bridge their divides.

Joshua Holzer does not work for, consult, own shares in or receive funding from any company or organization that would benefit from this article, and has disclosed no relevant affiliations beyond their academic appointment.