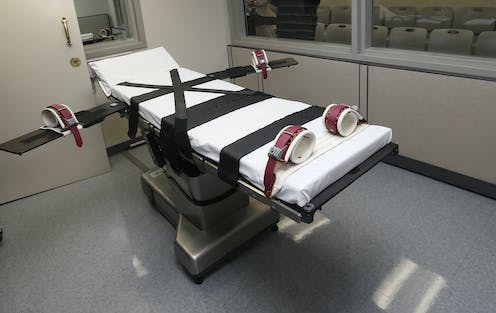 The state of Oklahoma put James Coddington to death on Aug. 25, 2022, for the 1997 murder of a 73-year-old friend who refused to give him money to buy drugs.

It marks the beginning of a busy period at the Oklahoma State Penitentiary’s execution chamber. Last month, the state announced plans to carry out the death sentence of 25 people over the next couple of years.

As a scholar who has long followed the capital punishment debate in the U.S., I know that Oklahoma’s plan runs against the grain of the death penalty’s recent history. Over the past several years both the number of death sentences imposed and executions carried out across the U.S. has declined sharply.

Since 2007 more states have abolished the death penalty than in any comparable 15-year period in American history. And in November 2020 America elected its first president ever to openly oppose capital punishment.

Today, fewer jurisdictions are using the death penalty, but some – like Oklahoma – seem to be doubling down. America’s death penalty is now defined, as the nonprofit Death Penalty Information Center noted in a 2021 report, “by two competing forces: the continuing long-term erosion of capital punishment across most of the country, and extreme conduct by a dwindling number of outlier jurisdictions to continue to pursue death sentences and executions.”

Looked at as a whole, capital punishment in the United States, as Amnesty International puts it, is used “against the most vulnerable in society, including the poor, ethnic and religious minorities, and people with mental disabilities.”

Indeed, framing the argument against the death penalty in ways that appeal to American’s sense of procedural fairness and equal treatment has been a tactic of death penalty abolitionists for decades – and may help explain the gradual decline in popular support for executions since the early 1990s.

Yet the U.S. appears to be at something of a stalemate when it comes to the death penalty – the country is seemingly unable to either achieve fairness in capital sentencing or to abolish the death penalty once and for all.

My research on capital punishment suggests that both the arguments of today’s abolitionists and the current stalemate can be traced back half a century to the Supreme Court’s 1972 decision in a landmark death penalty case: Furman v. Georgia. For a time, that decision stopped the death penalty in its tracks and offered a stinging critique of its unfairness. Yet it left the door open for states to implement or reform their own laws – and some chose to preserve capital punishment.

The Furman litigation was the culmination of a campaign conducted by a group of lawyers under the auspices of the NAACP Legal Defense Fund. They hoped the Supreme Court would strike down the death penalty because of its demonstrated racial discrimination and other inequities.

What they got instead was something less.

The court issued a cryptic and unusual “per curiam” decision – one which is a given in the name of the court rather than any specific judges.

It read: “The Court holds that the imposition and carrying out of the death penalty in these cases constitute cruel and unusual punishment in violation of the Eighth and Fourteenth Amendments.” The ruling was narrow in scope. It set out that if a death sentence was handed out in a capricious or discriminatory nature, then it would be unconstitutional.

Justice William Douglas, who did not think the death penalty was always unconstitutional, used his opinion to condemn the arbitrary and discriminatory way in which death sentences were imposed under laws that gave complete discretion to the sentencing judge or jury.

Because judges or juries rarely handed down death sentences, Justice Potter Stewart wrote that any particular capital defendant would have to be very unlucky to get one. It was, Stewart said, like “being struck by lightning.” Justice Byron White agreed and concluded that, because they were rarely imposed, they could serve no legitimate punitive purpose.

Justices William Brennan and Thurgood Marshall both announced that the death penalty was, in their view, always unconstitutional.

The dissenters were similarly split in their views, though they generally agreed that the question of whether the death penalty should be ended was a legislative and not a judicial question.

The Furman decision was both a remarkable achievement for the NAACP lawyers and a disappointment for those seeking to abolish capital punishment in this country.

It was remarkable because, for the first time in American history, the court insisted that if the U.S. were going to use death as a punishment, the government had to take extraordinary steps to ensure that it was administered fairly. It was a disappointment because the court did not say, once and for all, that capital punishment could not be squared with the Constitution.

The return of capital punishment

Reaction to the Furman decision was swift. Death penalty states worked hard to discern its meaning and to ascertain what they could do to restore capital punishment.

Some states, such as Louisiana and North Carolina, enacted mandatory death penalty statutes, eliminating discretion entirely from the death penalty system. Others – Georgia, Florida and Texas – chose a different path, retaining the punishment but guiding discretion by narrowing and specifying the class of death-eligible crimes.

Four years after Furman, the death penalty was back before the Supreme Court. The question was whether either of those approaches adequately addressed the concerns expressed by the justices who concurred with the Furman decision.

This time the court’s verdict was less equivocal, though no less divided. In a 5-4 decision, it struck down mandatory death sentencing statutes. In addition, a seven-justice majority found guided discretion statutes to be constitutional.

Despite compelling evidence that narrowing and specifying the class of death-eligible defendants did not cure the problems of unfairness identified in Furman, the Supreme Court again upheld the death penalty in 1987. In McCleskey v. Kemp, it ruled that statistical evidence could not be used to prove that racial discrimination persisted even after the implementation of the Furman-inspired reforms.

Fifty years after Furman, arbitrariness and discrimination remain persistent features of America’s death penalty system. Today Americans are still arguing about fairness in that system. And the case against the death penalty continues to be made on the terms that Furman’s concurring opinions articulated.

But Furman also initiated a process that lent a veneer of legal respectability to the death penalty system. It has allowed states such as Oklahoma to keep the machinery of death running by making procedural changes rather than addressing the injustices that continue to plague capital punishment in the United States.

Sociologist and law professor David Garland rightly observed that Furman and the court decisions that took up its mantle have served “to enhance the perceived lawfulness and legitimacy of capital punishment” and acted “as a force for its conservation.”

Austin Sarat does not work for, consult, own shares in or receive funding from any company or organisation that would benefit from this article, and has disclosed no relevant affiliations beyond their academic appointment.