4 reasons why abortion laws often clash with the majority’s preferences in the US, from constitutional design to low voter turnout 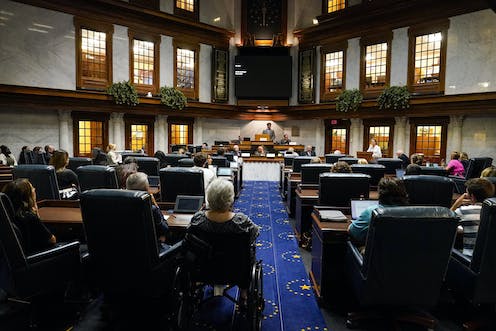 Both are conservative-leaning states that supported President Donald Trump’s reelection bid by near-identical margins in 2020 – 56.1% to 41.5% in Kansas and 57% to 41% in Indiana. So what explains the different outcomes?

The answer is that in Kansas, voters decided the outcome directly. In Indiana, legislators did so. This distinction matters because for contentious issues like abortion, as well as in other high-profile instances, state legislatures do not always represent public preferences within their states.

We are a multi-university team of social scientists that has been regularly polling Americans in all 50 states since April 2020. In the wake of the Supreme Court’s Dobbs decision overturning the constitutional guarantee of the right to abortion, our polling found a disconnect between the wave of new state laws restricting abortion access and the preferences of those states’ residents.

This raises the question of why public policy is sometimes inconsistent with what the public wants.

Here are four factors that help explain such disconnects.

Gerrymandering, or the practice of drawing electoral districts in ways that favor one political party over another, contributes to policy outcomes that do not reflect the will of a majority of voters.

In many states, partisan state legislatures often create districts to maximize their party’s dominance in upcoming elections. In North Carolina, despite a 50%-49% presidential vote in 2020, indicating an evenly divided voting public, an electoral map proposed by the Republican-controlled state legislature would, if implemented, result in Republicans likely winning 10 of 13 congressional seats in 2022.

In Illinois, Republicans won 41% of the 2020 presidential vote. Yet the proposed electoral map – drawn by Democrats – would, if implemented, likely yield Republicans only 3 of 17 congressional seats in the 2022 election.

Gerrymandering can lead to elections in which one party’s candidate is primed to win, resulting in noncompetitive general elections where the only real contest occurs during the primary election. Since the abortion issue is strongly polarized between the two major political parties, gerrymandering can result in elected officials who do not represent the majority of constituents on this issue.

Policies enacted by democratically elected governments can fail to reflect the will of the people they represent if people don’t – or can’t – vote.

Turnout in U.S. elections, especially at the state and local levels, and in nonpresidential years, can be abysmal. For instance, turnout in national midterm elections since 2002 has averaged just 42% of eligible voters.

Democratic representation is especially distorted when low turnout is combined with uneven turnout, with certain sociodemographic groups voting in particularly low numbers. In 2020, 70.9% of white voters turned out to vote in the presidential election, compared with 58.4% of nonwhite voters, while 76% of eligible adults ages 65 to 74 turned out, compared with 51.4% of those ages 18 to 24. Outcomes in the U.S. democracy – for example, policies and regulations adopted – are skewed toward representing people who vote over those who do not, so policies can become biased against people who don’t turn out.

Numerous factors influence the decision to vote, including whether people feel their voice matters and, to a smaller extent, how easy it is to vote. The U.S. has a long history of restricting access to the ballot box, and in recent decades the Supreme Court has weakened laws protecting voting access. In the post-civil rights era, however, most political scientists have concluded that restrictive election laws are less important than whether individuals think their votes will influence the political process.

So far, there are mixed signals on whether the Dobbs decision will prompt greater turnout. Polls have found that the people who care most about abortion after the Dobbs ruling tend to hold pro-choice attitudes. However, our research and a recent Washington Post-Schar School poll find that Americans who are most concerned about abortion are less certain that they will vote in the upcoming midterm elections than their less concerned counterparts.

The Founding Fathers feared the “tyranny of the majority.” They worried that direct democracy would be unstable, tyrannical and eventually result in violent failure.

In contrast, a large, representative republic bound by the Constitution theoretically creates a system in which interests would counteract one another to prevent any one from dominating the others. The system was intended to elect representatives who were more patriotic, enlightened and committed to the public good than the people at large, and thus to limit the direct representation of the people.

But the Founding Fathers’ design of American political institutions also contributes to the disconnect between the people and public policy.

For instance, Americans do not vote directly for president. They vote for electors to the Electoral College, who then cast their vote for president. Each state’s delegation of electors is equal to the state’s federal congressional delegation. Because every state automatically has two senators, individuals in states with small populations have outsize influence in presidential elections and in the U.S. Senate.

The Electoral College system sometimes leads to presidential candidates losing the national popular vote but winning the Electoral College, and thus the presidency. The president then appoints federal judges, who, if confirmed by the U.S. Senate, hold lifetime appointments and rule on the constitutionality of issues of national importance, such as abortion access.

Of the six Supreme Court justices who voted to overturn Roe v. Wade, three were appointed by a president who lost the national popular vote, and five were confirmed by a majority of senators who represented a minority of the U.S. population.

Even in cases where the Electoral College winner aligns with the winner of the national popular vote, both chambers of Congress must pass a bill in order for the bill to be signed into law by the president. Because of Senate rules, enacting most legislation requires a supermajority of senators.

This combination of design and rules means legislative processes are skewed toward inaction, sometimes contrary to the will of the majority of Americans.

The U.S. is politically polarized along geographic lines, particularly among states and across population density. Rural areas tend to support Republicans and are more anti-abortion compared to urban areas.

The primary causes of this geographic polarization are the influence of location itself, including local sociocultural differences, as well as preexisting demographic patterns that reflect differences between typical members of the two parties.

So, for instance, urban city centers tend to appeal to relatively young, highly educated and ethnically diverse people who tend to align with the Democratic Party. Residents of rural areas tend to be older, less educated and white, all characteristics typically associated with the Republican Party.

Rural areas and states with smaller populations have more electoral influence at the national level, especially due to features such as the Electoral College and equal numbers of senators per state. In turn, national-level partisan tendencies can affect decisions such as judicial appointments.

In the case of abortion, geographic polarization has contributed to a disconnect between public preferences and government policies by yielding state legislatures whose members are, on average, more strongly anti-abortion than the overall state populations they represent.

The U.S. system of government was forged in the 18th century from a compromise between relatively rural and urban states with widely varying population levels. It was designed to insulate the government from popular passions while making policy change difficult, and has inevitably led to public policies that fail to reflect the will of the majority.

Recent trends like those described above have exacerbated these tendencies. Abortion is merely the latest, and among the more contentious, cases in point.

Matthew A Baum has received funding from The National Science Foundation and the Russell Sage Foundation.

Alauna Safarpour and Kristin Lunz Trujillo do not work for, consult, own shares in or receive funding from any company or organisation that would benefit from this article, and have disclosed no relevant affiliations beyond their academic appointment.